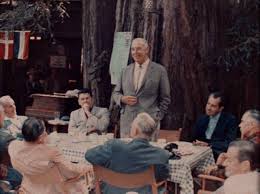 For anyone who believes that there are truly two distinct political parties in the United States of America and that the mainstream media ONLY covers for those with liberal ideology, this article is not for you. It will upset you because it is going to expose some truth about men that you may idolize.

Can you handle the truth?

I am a conservative and I do not hide that. However, I consider myself an independent and what I am about to reveal is one of the many reasons why.

For our readers who consider themselves to be Christian, let me ask you something…

Would you be interested in attending a ritualistic retreat that was highlighted by a 40-foot owl god, in which men in dark robes honor such a god with a mock human sacrifice?

It happens every year and your political heroes might just be in attendance. The following is a brief look inside the yearly summer camp for America’s power elite.

The Washington Post is one of very few mainstream media sources to ever report on the Bohemian Grove. Here is an excerpt from a 2011 article:

Every July, some of the richest and most powerful men in the world gather at a 2,700 acre campground in Monte Rio, Calif., for two weeks of heavy drinking, super-secret talks, druid worship (the group insists they are simply “revering the Redwoods”), and other rituals.

Their purpose: to escape the “frontier culture,” or uncivilized interests, of common men.

The people that gather at Bohemian Grove — who have included prominent business leaders, former U.S. presidents, musicians, and oil barons — are told that “Weaving Spiders Come Not Here,” meaning business deals are to be left outside. One exception was in 1942, when a planning for the Manhattan Project took place at the grove, leading to the creation of the atom bomb.

A spokesperson for Bohemian Grove say the people that gather there “share a passion for the outdoors, music, and theater.”

The club is so hush-hush that little can be definitively said about it, but much of what we know today is from those who have infiltrated the camp, including Texas-based filmmaker Alex Jones. In 2000, Jones and his cameraman entered the camp with a hidden camera and were able to film a Bohemian Grove ceremony, Cremation of the Care. During the ceremony, members wear costumes and cremate a coffin effigy called “Care” before a 40-foot-owl, in deference to the surrounding Redwood trees.

The interpretation of what goes on there is generally considered to be the content of conspiracy theories. After all, burning effigies and mimicking human sacrifice is perfectly normal. All Christian men do such things, right?

The guest list is like a historic who’s who of the Republican party: Richard Nixon, Ronald Reagan, Colin Powell, George W. Bush and George H.W. Bush have all been photographed there. They can not hide their membership. Wikipedia has a membership roster (past and present) which includes more than just political figures. It also includes the likes of entertainers like Clint Eastwood and James Woods.

Senior political analyst for CNN, David Gergen, is a member. Gergen served as an adviser for four presidential administrations (Nixon, Ford, Reagan and Clinton). I think his response to the “ambush journalism” in the following video is worth noting:

If this is truly a harmless gathering then why is everyone so tight-lipped about it?

The truth is that it has not always been a harmless gathering. Whether you believe that these men dabble in the occult or not, it is fact that, in 1942, the idea for The Manhattan Project was born here.

In 2000 a relative unknown named Alex Jones was able to sneak into The Bohemian Grove and film the “Cremation of Care” ceremony. This is not conspiracy. This is evidence that you can view. The documentary is quite long but the ceremony picks up at the 58:40 mark:

There are a lot of theories behind the inspiration for this ceremony. Some say it’s the Illuminati or Ancient Egypt. I don’t care what it is. To me it rings evil. I can not believe that men who were some of my early heroes (like Ronald Reagan) would participate in something like this.

I don’t care where the idea for the ceremony was born. This ceremony is evil and you might say satanic. How does it make you feel after watching it?

The problem with the Bohemian Grove is that the accusations do not stop at a simple ceremony. The ritual may be sick and twisted but it is no more sick and twisted than many things we see every day on television.

Some believe that Stanley Kubrick’s last film, Eyes Wide Shut, was an expose of secret societies like the Bohemian Club. The perverse sexual rituals in the movie are beyond what most could believe could possibly be more than creative fiction. He died just a few days after the final cut was submitted. Some conspiracy theories suggest that this was no coincidence and that he went too far in exposing the elite.

In this video Peter Alexander Chernoff claims to have witnessed the murder of Kevin Collins:

These are bold claims for certain. Is Chernoff a nut case? Possibly.

But he is not the only one who has talked of ritualistic killings and sacrifices that are linked to this elitist club.

Paul Bonacci claims to be both a witness and participant in the rape of a young boy which eventually culminated in the boy’s murder. Investigators have claimed that this took place on the grounds of the complex.

I don’t want to delve too deeply into these conspiracy theories today but if you would like to find out more about this angle, I would suggest you google “The Franklin Cover Up.” There are many bizarre accusations that are pointed directly at Reagan and Bush, Sr.

I don’t need to know the veracity of these conspiracies to know that I have little respect for anyone who belongs to this club. Seeing the ritual of “cremation of care” is enough for me to know that I could never be part of it. Somehow I don’t see the humor in a child being sacrificed to an owl god, whether it is real or not. This is dabbling in the occult and it is evil.

I can’t believe for a moment that my Creator would approve of this.

Actions speak louder than words. We put these political figures on pedestals and the truth is that most of them are sick individuals. I don’t care which party they belong to. Those who lust for power are not “normal” to begin with. 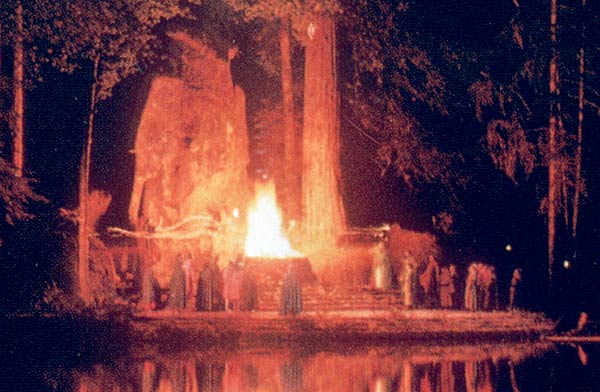