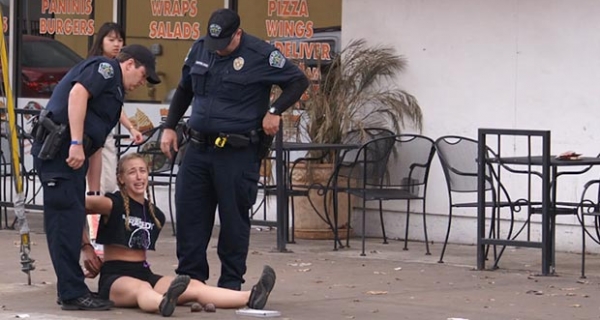 A woman jogging on Guadalupe Street near the University of Texas at Austin was stopped by police for jaywalking and then arrested for failure to provide ID. Onlooker Chris Quintero witnessed the incident and caught it in a series of photographs and on video.

Quintero recounted the details of the arrest on his blog, chlorineoverdose.blogspot.com:

Sitting at Starbucks, on the corner of 24th and San Antonio, I noticed a particularly odd situation. Two Austin Police officers standing outside the Castilian just lingering. Every time I looked back there was a different student holding a carbon copy of what looked to be a jay walking citation. Suddenly, one of the cops shouts at an innocent girl jogging with her headphones on through West Campus. He wobbled after her and grabbed her by the arm. Startled, and not knowing it was a cop, she jerked her arm away. The cop viewed this as resisting arrest and proceeded to grab both arms tightly, placing her in handcuffs. She repeatedly pleaded with them saying that she was just exercising and to let her go. She repeatedly cried out, “I did not do anything wrong…just give me the ticket.” The other officer strolled over and now they were making a scene. She tried to get up. I doubt she was running away as she was in handcuffs, but the second cop pushed her back down to the ground. Because of the commotion, they walked her to the cop car in the alleyway next to Big Bite, where she, overcome with frustration, yelled loudly to gain attention. Because of that, the cops tightened their grip causing her to squirm and kick. Then came two bike cops from down the alley. We now have four cops and one small, helpless girl in the back of a cop car, because she was just going for a run.

Maybe the plus size cops should follow her lead, and go on a jog instead of wasting tax dollars on trivial matters… just a thought.

The Daily Texan reported that there was no known effort to target jaywalkers in the area that day:

APD spokeswoman Veneza Bremner said as far as she was aware, there was no concerted effort Thursday to ticket jaywalkers.

“I don’t think there’s any initiative going on out there, but [APD officers] can go write tickets whenever they see a problem out there,” Bremner said.

Bremner said officers occasionally patrol the area even when they have not been called to address a specific crime.

“I’m not sure how often they do it, but I do know that they’re out there every now and then doing that,” Bremner said. “Whenever the call load allows, they’re proactively out there.”

APD spokeswoman Lisa Cortinas, APD officers do not target jaywalking specifically, instead they focus on pedestrian and bike safety overall.

“District representatives were working pedestrian enforcement at 24th Street and Guadalupe,” Cortinas said. “[In this case], the call is titled failure to identify.”

But what exactly does “failure to identify” mean?

The Texas Failure to Identify law is fairly simple. It states:

OK, it is fairly simple.  If you are under arrest refuse to provide your name, date of birth, or residence address, you commit a Class C misdemeanor unless you have warrants outstanding, when it is a Class B misdemeanor.  If you are either under arrest or lawfully detained, it is an offense to provide a false name, date of birth or address.  The later is a Class B or A misdemeanor, dependent on whether you have outstanding warrants.

What is not an offense is refusing to provide your name, date of birth, or residence address when you are lawfully detained.

Unfortunately, this is not unusual for Texas.  Police officers in this state have an idea that they have the right to identify anyone at anytime for any or no reason.  The courts have repeatedly slapped them down on this.

Yet we still see police officers demand identification in Texas and threaten arrest (or actually make arrest) on Failure to Identify when in fact, no offense has occurred.

A state may not make it a crime to refuse to provide identification on demand in the absence of reasonable suspicion.The Court has also held that a requirement that a detainee give “credible and reliable” identification information to the police upon request is too vague to be a criminal offense.

This raises several questions: Was the jogger actually arrested? If so, was it for failure to identify? It appears that failing to provide identification in itself is not always a crime. Did the officers have reasonable suspicion that the woman was engaged in criminal conduct? Previous court cases have found violations of Fourth Amendment rights when a plaintiff was arrested for failing to identify when officers had no valid reason to suspect criminal activity. Was the jogger arrested for jaywalking? If so, why? That offense usually is punishable by a fine, not an arrest.

There has been some speculation that the woman might have been charged with resisting arrest, but isn’t pulling away when someone forcefully grabs you a natural, protective response? Experts say so, and that the charge is one of the most abused of criminal charges and is often a violation of civil rights.

Some might say the jogger should have stayed calm, but consider the facts: the woman was wearing headphones and did not appear to hear the officers yell to her. Quintero stated she was obviously startled when one of the cops grabbed her by the arm and pulled away. The incident occurred in a dangerous neighborhood, so it isn’t shocking to believe being grabbed while running would trigger some panic:

If you spend much time in the West Campus neighborhood near the University of Texas, lock your house and car and hang on to your wallet.

The neighborhood is among the 15 most dangerous in the nation for property crimes, according to a study by the Web site neighborhoodscout.com .

It said the chance of becoming a property crime victim in a year was one in two. (source)

Sure, those statistics refer to property crime, but several violent crimes have occurred in the area:

Although officials have said the neighborhood has relatively little violence, it also has been the scene of some of Austin’s most high-profile violent crimes in recent years, including the July shooting deaths of two recent UT graduates.

Was the jogger snatched up by police for some reason that is still unknown to the public?  It doesn’t seem that way, as the APD spokeswoman said the call was “titled failure to identify.”

Hopefully a full investigation into this case will be conducted. As of now, it seems like this is a case of serious over-reaction by the officers involved, and a sad example of the police state that is America.