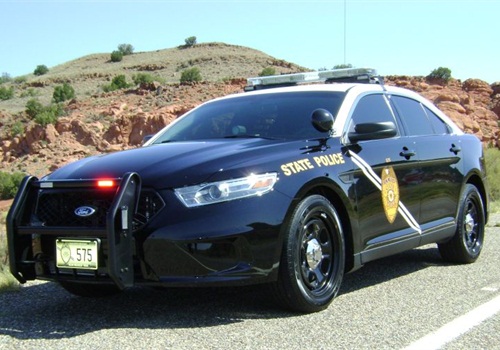 The New Mexico State Police and the Albuquerque Police Department have come under fire in recent years for unjustified use of excessive force and for police-involved shootings.

Incidents have occurred with enough frequency in the state to trigger a Department of Justice investigation that launched in 2012 and is still ongoing.

The state’s police forces have become infamous for shooting at minivans full of kids and for their penchant for Roswellian anal-probing of supsects.

Yet, the man who designs the training programs for the state’s police departments doesn’t see a problem. In fact, he has instituted a curriculum that puts LESS restraint on officers in deciding when to use deadly force.

Jack Jones is the director of the Law Enforcement Academy. The New Mexican reports that he has been granted full control over the design of the basic training program:

In September, the state’s eight-member Law Enforcement Academy Board, which is appointed by the governor and chaired by the attorney general, voted unanimously to change the New Mexico Administrative Code to give complete control over the curriculum to Jones.

Greg Williams, an Albuquerque attorney and president-elect of the New Mexico Foundation for Open Government, said before the board voted on the change, it had a process that included public involvement.

“What they did was to change the process so that the public could not be involved,” he said.

Some retired police officers and criminologists are questioning that change. They say having one person in charge of the curriculum isn’t a good idea. They also have concerns about some of the tactics Jones is teaching:

“It would be out of the ordinary for one person to write [the curriculum] without other people having input,” said Thomas J. Aveni, director of the Police Policy Studies Council, a New Hampshire-based group that studies use of force by law enforcement.

“Now you have one person that is making the selection, and who is to say that person knows what a curriculum is supposed to be like,” Gallegos said.

Last July, Gallegos was fired for insubordination after he refused to teach new cadets some of the firearms training Jones wanted to implement:

“The statement that he made to us [instructors] in a [January 2013] meeting was, ‘No, I want you guys teaching these guys how to make a car stop with a bullet.” Gallegos said, “This is the thing — why are you shooting at a car? You should be shooting at the individual that is shooting at you.”

Jones tried to justify that part of the training like this:

“We want them to see that if there’s a threat that’s inside a vehicle and they need to shoot at it, what happens to that round. They’re wearing a gun and a badge protecting you [the public] against the violence. Don’t you think they should be prepared for the most violent encounter that they can come up against?”

Say what? Way to skirt around the question, Jones!

Williams said that because of the high number of police shootings, the public deserves to know how officers are being trained. He added that the training documents can’t be lawfully withheld unless there is an ongoing criminal investigation or some other exception.

The New Mexican filed a request under the Inspection of Public Records Act for a copy of the academy’s new curriculum. Jones wasn’t having it. He said he doesn’t plan to release it because criminals could use the tactics taught to cadets against them.

“I’ll burn them before you get them,” he told The New Mexican.

Jones says officers need to be prepared for violence and justifies training officers to use more force because there are so many bad guys out there:

I agree with Jones’ opinion that evil has arrived in New Mexico, but I doubt we agree on the source.