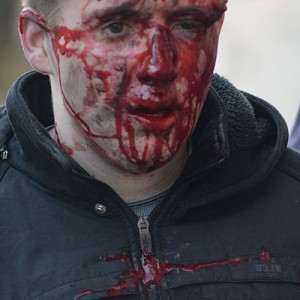 What the people of Ukraine are being put through is absolutely horrible.  They are caught in the middle of a massive tug of war between the East and the West, and they are paying a great price for it.  Ultimately, Ukraine will end up either being dominated by Russia (a bad outcome) or by the EU and the United States (another bad outcome).  Most Ukrainians just want to be free and want to be able to build a better future for themselves and their families, but it is extremely unlikely that they will be able to escape the specter of foreign domination.  Meanwhile, the violence in Ukraine is planting the seeds for a potentially much larger conflict down the road.  The days of “friendly relations” between the United States and Russia are now gone.  Russia is absolutely furious that the U.S. has fueled a violent revolution on its own border, and it is something that Russian officials will not forget for a very long time.  In return, U.S. officials are taking an increasingly harsh stance toward Russia.  In the end, the seeds that are being planted right now could ultimately blossom into a full-blown conflict between the superpowers in the years to come.

Let there be no mistake – the United States is heavily involved in what is going on in Ukraine.  Even the New York Times admits this.  And the U.S. Ambassador to Ukraine and the Assistant Secretary of State have been caught on tape discussing their next moves in getting a new government installed in Ukraine.

In addition, a number of non-governmental organizations inside the United States have allegedly been assisting and organizing the revolution in Ukraine for a long time.  At least a few of these organizations have ties to George Soros.  This is something that I discussed in a previous article.

Some of the “progressive” NGOs that have been accused of fueling the violent revolution in Ukraine include the National Endowment for Democracy, Freedom House, and the Open Society Foundations (formerly known as the Open Society Institute).

Please don’t misunderstand me.  I am not taking sides.  I am just pointing out that both sides in Ukraine are controlled.  If I was living in Ukraine, I would want both Russia and the United States to go away and leave Ukraine alone.

Instead, Ukraine is being used as a battleground to fight a proxy war between the East and the West.  Now that the opposition has gained the upper hand, it does not appear that Russian officials are in any mood to recognize the new “government”…

Prime Minister Dmitry Medvedev on Monday said Russia had grave doubts about the legitimacy of those in power in Ukraine following President Viktor Yanukovich’s ouster, saying their recognition by some states was an “aberration”.

Medvedev also stated that he has “big doubts about the legitimacy of a whole series of organs of power that are now functioning there.”

Last Friday, an agreement was signed by the two sides in Ukraine that was supposed to bring about a peaceful resolution to all of this.  But the revolutionaries reneged on the deal and toppled the government instead.  Needless to say, Russia was quite horrified by this…

The Russian Foreign Ministry criticized the West for turning a blind eye to what Moscow described as the opposition reneging on its agreement signed Friday to form a unity government and aiming to “suppress dissent in various regions of Ukraine with dictatorial and, sometimes, even terrorist methods.”

So what does Russia plan to do?

That is the big question that everyone is asking.

They are not doing much of anything just yet.  But there have been rumors that we could potentially see some economic blowback…

“My Belarusian colleague and I are extremely concerned about the situation in Ukraine. We do not rule out that curbs could be introduced on the imports of products of high veterinary and phytosanitary risks from Ukraine,” Dankvert told Interfax after talks with his Belarusian counterpart Yury Pivovarchik in Bryansk, and telephone talks with Ukraine’s Deputy Agrarian Policy Minister Ivan Bisyuk.

Of course what the U.S. government is most concerned about is any military action that Russia might take.

National Security Adviser Susan Rice says that what has happened in Ukraine reflects “the will of the Ukrainian people and the interests of the United States and Europe” and that it would be a “grave mistake” for Russia to get militarily involved.

But whatever happens over the next few days, nobody should think that the Russians are simply going to abandon their interests in Ukraine.  Russia has a very important military base down in the Crimea, and the eastern half of the country is very pro-Russian.

So the struggle between East and West in Ukraine is likely to continue for quite some time to come.  The following is an excerpt from a recent WND article…

The issue with Ukraine is whether it will join the E.U. or Putin’s Eurasian Union. The country is roughly divided on this issue between eastern and western Ukraine. The eastern portion wants to remain with Russia while the western side wants to move closer with the West.

In southern Ukraine, where the Crimea is located, Russian influence remains strong.

Because demonstrators who want to see Ukraine lean westward have become emboldened with their immediate success of ousting Yanukovich, it could make it more difficult for them to come to terms with any settlement agreement to reunify the country.

Moscow has a large naval military facility in Sevastopol in the Crimea and recently received a 25-year lease extension to 2042, with another five-year renewal option until 2047. In exchange, Ukraine received a multiyear discounted contract for much-needed natural gas.

And the pro-Russian eastern half of the country is actually the stronger of the two halves economically.  So this will likely complicate matters for the EU and the U.S. as they try to bring Ukraine into their sphere of influence…

Seven of Ukraine’s 10 largest private companies by revenue are either headquartered or maintain the majority of their operations in eastern Ukraine. These firms are owned by some of Ukraine’s wealthiest and most influential individuals. Three of these 10 corporations — mining and steel company Metinvest, energy firm DTEK and its subsidiary Donetskstal — are based in the eastern industrial city of Donetsk and are owned by Ukraine’s wealthiest man, Rinat Akhmetov. Interpipe, the company that controls 10 percent of the world market share of railway wheels and more than 11 percent of the world market share of manganese ferroalloys, is based in Dnipropetrovsk and belongs to businessman and politician Victor Pinchuk.

The country’s most important businessmen are embedded in the east, where their businesses make disproportionately high contributions to the Ukrainian economy and national budget.

In the end, this proxy war between the East and the West has left Ukraine with a collapsed economy and on the brink of civil war.

And what has happened in Ukraine has caused permanent damage in the relationship between the United States and Russia.

It won’t happen this month or even this year, but someday the U.S. may end up bitterly regretting antagonizing the Russian Bear.

At least that is what I think. 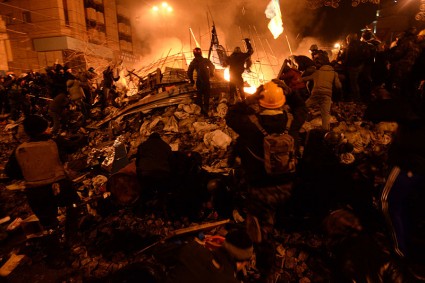