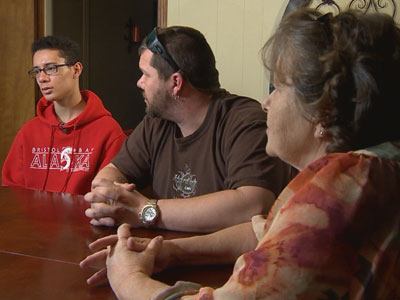 In one of the most ridiculous examples of “zero tolerance” yet, a high school honor student in Clarksville, Tennessee has been so severely punished for a fishing knife found in his father’s vehicle on school property that he may lose his chance at a college scholarship.

David Duren-Sanner, a senior at Northeast High School, made the crucial error of allowing a search of the vehicle he drove to school that day, because “he had nothing to hide.”

He had borrowed his father’s vehicle. His father is a commercial fisherman by trade.

It’s not difficult to guess how things quickly devolved from that point.

On Thursday, Duren-Sanner, a senior at Northeast High School drove his father’s car to school. During a random lockdown, his car was chosen to be searched.

Duren-Sanner gave permission because he said he had nothing to hide.

His father is a commercial fisherman on the West Coast and had apparently left a fishing knife in the car. Duren-Sanner’s father said it might have been wedged between one of the seats.

Duren-Sanner said he told school officials and the Sheriff’s department the car was his father’s and he didn’t know the knife was in it.

“He’s like ‘it doesn’t matter it was in your possession anyway,’” Duren-Sanner said. (source)

In an incident of absolutely monumental overreaction, the punishment was extreme, so much so that it threatens the boy’s future. Not only are his chances at a scholarship now in jeopardy, but he also faces felony charges.

School officials suspended him for 10 days, the maximum allowed under school policy, and then he was reprimanded to attend 90 days at an alternative school.

Duren-Sanner has an appeal hearing on Wednesday with the school board.

If his punishment is upheld, Duren-Sanner will not be able to attend prom, his JROTC ball or walk at graduation. His family said it’s unclear whether he’ll be able to graduate at all.

Duren said her grandson has a 3.0 grade point average, is on the honor roll and he has never even been sent to the principal’s office She said scholarship applications have stopped since it is unclear what her grandson’s future is.

A petition has been started to end his suspension, have the charges dropped, and not punish him for the days he missed through the ridiculous suspension thus far. Over 4000 signatures have already been collected. You can sign it HERE to add your support.