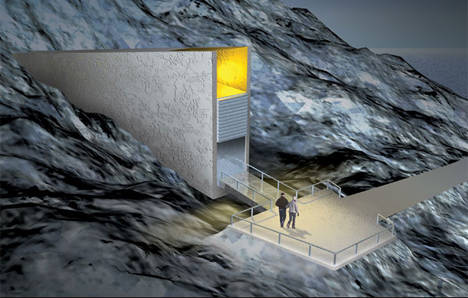 The so called ‘Doomsday Seed Vault‘ buried deep in the permafrost in Svalbard, Norway holds samples of almost every food seed on the planet. It was built, by the Norwegian government in 2006. The running costs are met by the Norweigan government and The Global Crop Diversity Trust.

The seeds held at the bank are to ensure food security on an ongoing basis. They are not a replacement for national seed banks, they are a back up against a worst case scenario whereby a national seedbank is destroyed. They are also stored so that should a global catastrophe happen the seeds can ensure future food supplies. The seeds remain the property of the nation that deposited them at all times.

Only the depositing nation can withdraw the seeds they have put in to the bank. It’s rather like the personal banking we used to have before the Cyprus bail-in changed all that.

There are quite a few more I could come up with, but I think you get my point.

The idea that this storehouse ensures future food security is flawed. Seeds are no use at all in a vault in Norway, they are useful in the hands of those who will plant them and produce food from them. Getting those seeds into the hands of growers will be a logistical nightmare if a global catastrophe has occurred.

The only way that the seed bank will be of any use is if the seeds are withdrawn and returned to their homeland prior to a disaster taking place. Then they will be on the spot as it were, ready to plant and to produce food for the hungry people.

This of course would imply that nations would need to have prior knowledge of impending disaster…it would also nullify the need for the seed bank in the first place.

We are told almost daily that The Arctic is warming fast, faster than anywhere else. If this is true why build a seed vault there that relies on the permafrost to keep it cool if the power goes off?

Does this indicate that the powers that be KNOW that the permafrost isn’t going to melt?

The United States has vast areas that are unlikely to be affected by volcanoes or earthquakes. It has vast areas that would be of no interest at all to anyone intent on dropping a thermonuclear device. Why send samples of US seeds to Norway when we have places right here at home we can hide them?

Are we really expected to believe that a request for the return of seeds will be met with an Amazon-like dispatch of the order?

These seeds will be doled out to those nations that are deemed worthy by the United Nations. Worthiness will be judged on that nations willingness to bow to their new leaders.

Food security rests with us, each and every one of us. If everyone had even a few’ starter packs’ of heirloom seeds, and if everyone learned how to save seeds, no banks would be needed.

Future food security is in our hands, it’s up to us to prevent that security from being stolen by the New World Order.