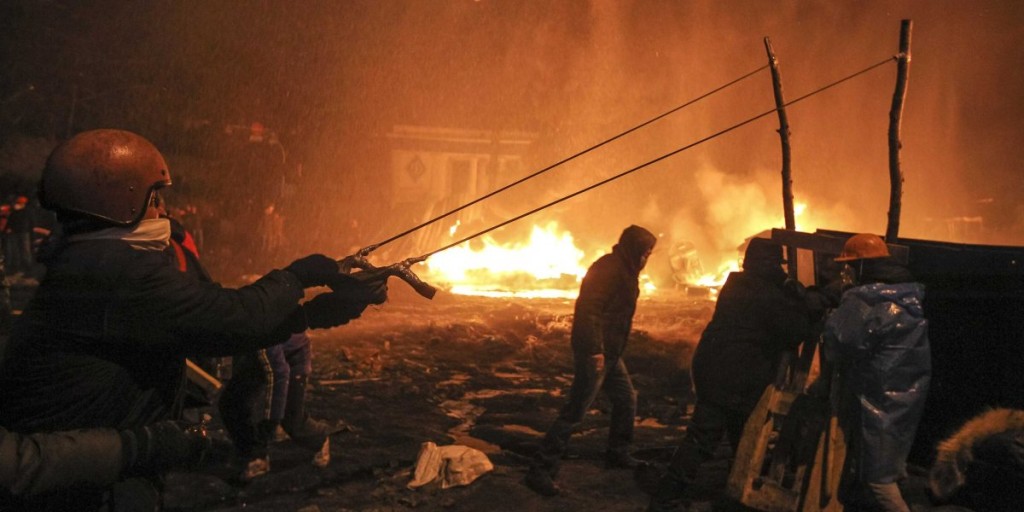 For the immediate moment, forget about all the talk about Russian troops training inside of the United States under a series of the Federal Emergency Management Agency Bilateral Agreements with the Russian military as now reported in European publications. For the moment, let’s suspend our comparisons of the extreme human rights violations committed by Russian backed sympathizers in Kiev and how the same is going to happen in the United States. When I read some of the accounts of the conflict and turmoil in the Ukraine, I feel like I have walked into the middle of the movie and the necessary background has gone unexplained. What first needs to be considered is the importance of the Ukraine and what it means to the grand chessboard as it potentially relates to World War III. There is but one, yet undeniable fact, whoever exercises control over the Ukraine will tip the balance of power in the world, both economically and more importantly, militarily.

Most of the accounts that we are reading are very misleading. These accounts would have us believe that there is an Ukrainian Spring event which surfaced on, or about, November 30th of last year. This is inaccurate as the struggle for who will bring the Ukraine under their sphere of influence has been brewing for some time.

Up until 2010, the Ukraine was turning pro-Western under the Orangist government of Viktor Yushchenko from 2005-2010. At the beginning of 2010, it almost appeared to be a certainty that the Ukraine would become an associate member of the European Union. However, Putin led Russia to an unprecedented post cold war economic and military revival. Under heavy Russian influence, this trend was reversed when pro-Russian leader, Victor Yanukovych, assumed the reigns of Ukrainian power in 2010. And now, as the world is witnessing, the modern trend of favoring Russia, is not universally embraced in the Ukraine. As a consequence, the Ukraine remains politically and socially divided between pro-Russian and subsequent pro-Western elements. Therefore, the Ukraine also remains an important tool of influence for both sides. The implications of who controls the Ukraine are staggering.

With the Yankuovych government fleeing to the safe haven of Russia in the midst of Ukrainian civil unrest, has brought the importance of the Ukraine to the center stage of the world’s political scene.

Putin has started rattling his Russian saber as Russia is preparing to conduct military maneuvers along the Ukrainian border. The United States views this move as provocative and has warned Russia that these military exercises could “lead to miscalculation”. This warning occurred only mere hours after a counter-revolutionary move was conducted by pro-Moscow gunmen as they  seized government offices in the region of Crimea and raised a Russian flag. A destabilized Ukraine is facing a financial disaster and the likelihood of a violent rebellion in the largely pro-Russian east and south.

The Ukraine is teetering on the brink of civil war.

The Importance of the Ukraine to Russia

The population of the Ukraine is 45 million and it has the second most robust economy in the former states of the former Soviet Republic. This, alone, makes the Ukraine important. However, the Ukraine’s importance extends far beyond these considerations.

In 1979, the Soviets invaded Afghanistan because they were hopeful of establishing a natural gas pipeline through the country and thus, make Russia a player in the energy business. Russia failed in this attempt. Despite losing the war in Afghanistan, the Russians pursued their policy of energy dominance under Putin. Subsequently, Russia has become a major player in the energy business in which Russia supplies much of Europe a healthy portion of its energy needs. Without the Ukraine, Russia becomes a significant purchaser of energy, not a seller. For both Europe and the Russians, the Ukraine is most important for its location, particularly as a transit state for energy. Nearly 25% of the European Union’s natural gas comes from Russia, and 80% of that gas passes through the Ukraine. Wars have been fought for far less important economic reasons.

The Ukrainians also possess a formidable military industrial complex. If the Ukraine were to join the European Union and perhaps even NATO, someday, this would constitute a major national security threat to the Russians as it would make the Cuban Missile Crisis, in reverse, look tame by comparison.

Most importantly, Putin is attempting to establish a Eurasian empire through the resurrection of many of the former Soviet Union States. This move is seen as being of paramount importance because the rise of this imperialistic Eurasian empire will propel the military prowess of the Russians on an equivalent level with the United States. Further, if the Russians and Chinese continue in their efforts to attempt to unseat the dollar as the world’s reserve currency, through the purchase of Iranian oil with gold, Russia must have the military muscle to back up this provocative move. The establishment of an Eurasian empire is of paramount importance to this strategy. Putin is keenly aware that without the Ukraine, Putin’s dreams of creating an Eurasian empire are dead. However, if Russia were to regain control over the Ukraine with its 45 million people, major resources and access to the Black Sea, Russia would automatically regain the necessary leverage to become a powerful imperial state. In short, the control of the Ukraine is a game changer and the outcome could result in World War III.

There are also other considerations when we contemplate how far Russia will go in terms of retaining control over the Ukraine. For example, the Ukraine is vital to Russia because of economic industries, like steel and agriculture. The Ukraine is vitally important to Russia for military reasons.  The Ukrainian city of Sevastopol is the headquarters for Russia’s Black Sea Fleet. Any conflict with the West over Syria and Iran will not occur if the Russians do not control the port of Sevastopol. If the Ukraine joins the European Union, and Sevastopol falls into the hands of the West, Syria and Iran will be invaded without hesitation by the Obama administration.

Further, the Ukraine’s strategic location as a borderland between Russia and Europe cannot be overstated. Also, the proximity of the Ukraine to the major food growing region of Russia is critical to the survival of the Russian people. Additionally, the economic heartland in the Volga region makes the country key to Russia’s geopolitical strength and economic prowess. In professional sports parlance, the Ukraine is a free agent and like a Lebron James, the Ukraine will eventually sign with the highest bidder. Putin will not be outbid as he is visiting the Ukraine, on April 12th, to offer concessions for the transit role that the Ukrainians play with regard to the transport of natural gas.

Meanwhile, the Russian military will bluster by moving its forces to high alert status. However, nothing will occur until the Ukrainian issue is resolved. If the Russians win, their Eurasian empire will challenge the US in Syria and Iran. If the Russians lose complete control of the Ukraine, a third world war could begin, as NATO would surely oppose a Russian military incursion. Remember, NATO ally Turkey is right across a small pond and it is amazing what one can learn when one can properly read a map.