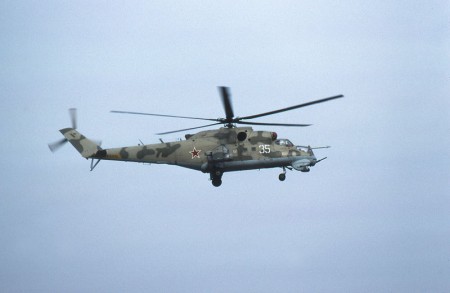 Russian troops and pro-Russian militia forces now have full military control of Crimea without a shot being fired, and Russian troops and helicopters continue to pour into the region.  Not that there really was ever any doubt about what was going to happen in Crimea.  As I wrote about yesterday, Russia will never, ever let Crimea go without a fight.  The Russian Black Sea fleet’s base at Sevastopol is simply way too strategically important.  But it is still shocking to see video of dozens of Russian attack helicopters and dozens of Russian armored personnel carriers heading toward Sevastopol.  The acting president of Ukraine says that Russia “has invaded Ukraine” and is attempting to “annex Crimea”.  The former president, Viktor Yanukovych, insists that he is still the rightful democratically-elected president of Ukraine and he is calling on Russia to intervene militarily in his nation.  Meanwhile, Russia is calling on the new government in Kiev to honor “the peace deal signed last Friday, Feb. 21, by Yanukovych and the opposition, notarized by the Foreign Ministers of France, Germany and Poland and approved by the US.”

But Russia is not just sitting around and waiting for the new government in Kiev to honor the peace agreement that was made.

Rather, Russia has been very busy moving their chess pieces around the board.

#3 A convoy of Russian armored personnel carriers moving through Crimea…

#4 Another video of Russian armored personnel carriers moving through Crimea…

#5 A Russian frigate blockading the Crimean port of Balaklava…

Pro-Russian militia are also manning checkpoints on both of the major highways that connect the Crimean peninsula with the rest of Ukraine.  The following comes from the Wall Street Journal…

Crimean special forces and local militiamen with Kalashnikovs and masks have hoisted Russian flags and set up checkpoints on the only two highways that connect the Black Sea peninsula to mainland Ukraine.

The men are checking cars traveling in and out of Crimea, a region in Ukraine’s south that was once part of Russia and has become the epicenter of a backlash against the pro-Western uprising in Kiev that has toppled President Viktor Yanukovych.

And according to NBC News, pro-Russian militia also have full control of the major airports in Crimea…

Ukraine’s interior minister accused Moscow’s military of blockading an airport near a Russian naval base on Friday and armed men took control of another airport in Ukraine’s Crimean capital of Simferopol.

In a Facebook post, Arsen Avakov called the seizure of the Belbek international airport in the Black Sea port of Sevastopol a “military invasion and occupation.” He added: “It is a breach of all international agreements and norms.”

The Interfax news agency quoted Russian military sources as saying the incident at Belbek airport was intended to stop “fighters” flying in. However, Interfax later quoted a Russian official as saying that no units had approached the airport or blockaded it. NBC News was unable to independently verify either account.

Russian officials acknowledge that Russian armored vehicles have been moving around Crimea, but they deny being involved with the taking of the airports and they insist that there have been no “provocative acts”…

The Russia Foreign Ministry confirmed that armored vehicles from its naval base in Crimea were moving around Crimea for “security” reasons, “which is happening in full accordance with the Russian-Ukrainian agreement on the Black Sea Fleet.” Russia’s defense ministry told the Interfax news agency that there had been “no provocative acts in relation to units and divisions” from Russian forces.

On the other hand, there are rumors that a Russian vice-admiral has declared that war with Ukraine has begun.  The following is translated from a foreign source…

In Crimea, Black Sea Fleet commander of Russian Federation Alexander Vitko announced the beginning of the war with Ukraine. Such information TSN confirmed MP from the “homeland”, the former chairman of the Mejlis of Crimean Tatar people Mustafa Cemil

According to him, on Thursday, February 27 in Sevastopol Vice Admiral Vitko gathered all the generals and said, “We start war with Ukraine. ”

About the Jemilev meeting only became known today, February 28.

In addition, according to the deputy, the morning without permission border of Ukraine, trying to bypass finders crossed four helicopters from Anapa. Moreover, he noted that Ukraine is now Russia does not oppose, and Ukrainians are on the verge of very dramatic events.

“The only way out here, I think that we have the strength to impose emergency rule, bring our troops and take control of all state institutions,” – said Cemil.

So what is going to happen next?

The new government in Ukraine is certainly not strong enough to fight a war with Russia.  If it tried, Russia would win in just a matter of days.

I don’t believe that Russia actually wants a shooting war either.  They just want to make sure that they do not lose control of Crimea and their base at Sevastopol under any circumstances.

And the United States and the EU certainly do not want a war.  If war does erupt in Ukraine, the U.S. and the EU would probably be very hesitant to get militarily involved.

So let us hope for a peaceful resolution.  But without a doubt, things in Ukraine will never go back to the way that they were.  Way too much has changed.

And one things seems clear.  Whether Crimea officially stays a part of Ukraine or not, it now belongs to Russia and most of the people living there seem to like it that way.  Just consider what happened when Vladimir Zhirinovsky visited Sevastopol on Friday…

In recent days large pro-Moscow rallies in Sevastopol have drawn thousands of jubilant supporters waving the Russian tricolor flag, while the Ukrainian national yellow and blue banner is a rare sight in the city.

On Friday, Vladimir Zhirinovsky, one of Russia’s most outspoken ultranationalist politicians, paid a surprise visit to the city and gave a speech in front of the city’s administration building.

“All the roads, all the ports, all the communications are under the control of the provincial Crimean government,” he declared to thunderous applause of hundreds of people. “I don’t want you to worry whether anything bad will happen tomorrow — let’s welcome the Russian flag that is flying over government buildings.“

What are your thoughts on the conflict in Ukraine?