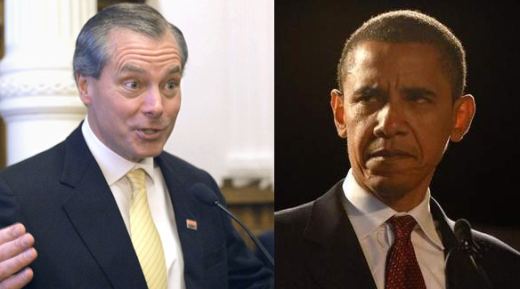 Texas Lieutenant Governor David Dewhurst has pledged to defend the State of Texas’ border with Mexico against drug and sex traffickers. The claim came during a recent interview with Breitbart News.

Texas is facing a large bill each month in their efforts to secure the border. Approximately $5 million each month is being spent by the state on border security, which includes more law enforcement officers, which will be used to cover the exposed areas in the border.

Additionally, Dewhurst said that the state has purchased a high-altitude spotter plane that has the ability to see six miles into Mexico at night. Texas has also purchased six new Department of Public Safety helicopters that also have night vision capability, along with six armored gunboats that patrol the Rio Grande River.

Dewhurst told Breitbart, “The border issue is just about dollars and cents. This proves Texas can do the job the federal government has refused to do — to invest in the border and shut it down from illegal activities that are hurting Texans and other Americans.” He added: “Texas will protect our own citizens and other Americans from the criminal gangs that are destabilizing our state and our nation.”

“This is just unacceptable. We have a problem and everyone knows it except for the Obama administration and people in high levels of Border Patrol.”

The Lt. Governor did not stop there: “Organized crime groups in Texas are contracting with Mexican cartels to be their enforcers. The cartels’ presence are in all of our major cities. Seven of the eight Mexican cartels operating in Texas are using our state as a staging area for their operations across the U.S.”

“Illegal immigration is one issue, and we all understand why people want to come here. I’m a strong believer in legal immigration, but not illegal immigration,” said Dewhurst. “We have young girls being trafficked as slaves for immoral purposes across our border and through our state. This cannot be allowed.”

Dewhurst said, “For six or seven years, I’ve been calling on our congressional delegation in D.C., we need to at least double, if not triple, the size of our Border Patrol.”

In the same manner the administration isn’t intent on national security by securing the border, we don’t’ seem set on the chief national security issue which is a usurper in the White House either. This is exactly why this is such an issue. We not only have illegal aliens crossing the border from Mexico, but we have jihadists
crossing the border in America, all while Barack Obama, Democrats and RINO Republicans discuss how they can put off border security in order to reward lawbreakers with citizenship. In fact, this administration thinks amnesty is a civil right.

This is a travesty. In fact, seeing that this administration knowingly allows the borders to remain unsecured and is not providing the necessary funds to secure it only enables America’s enemies and other criminals, which in my book seems to be the textbook definition of treason.

However, I applaud Texas for at least taking the steps to do what the feds should be doing and that is securing the border. I certainly would like to see more tax dollars going towards securing the border, which is a very real threat, than paying for the Obama’s vacations, more food stamps, or increased welfare, wouldn’t you?