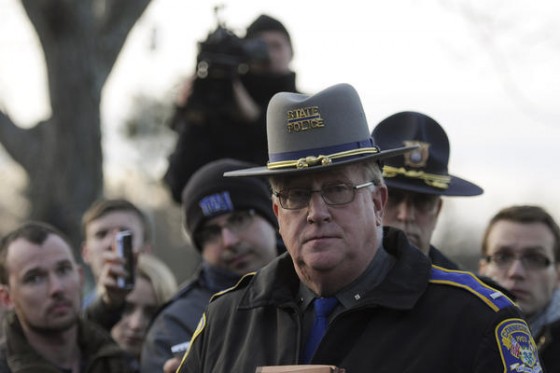 A woman known as “Ashley” called and spoke to Lt. Vance regarding the possible repercussions of the refusal of many of the state’s residents to either register their firearms or turn them over, in compliance with the state’s ridiculous new law. Things are getting heated in the state as tens of thousands refuse to comply with the unconstitutional law, the home addresses of pro-gun control members of the state legislature have been published, and a well-armed patriot group points out, “We are familiar with the finer points of marksmanship.”

Vance said so many outrageous things during the taped call that it’s hard to limit ourselves to just a couple of quotes, but here are the two that really tell the tale:

Vance, some folks may recall, got a lot of camera time spinning the official yarn after the alleged Sandy Hook massacre a year ago December, interestingly after he had participated in a fake school shooting “drill” only 2 months before that event.

Obviously, he’s still a pro-government mouthpiece.  Listen to this entire disturbing conversation to hear the omnipotent mentality of the kind of people we are up against: