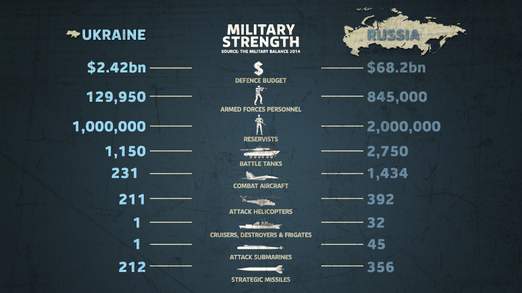 Multiple sources are reporting today that the Commander of Russia’s Black Sea Fleet has issued an ultimatum for Ukraine to surrender or face an assault across Crimea.

Russia’s military has given Ukrainian forces in Crimea until dawn on Tuesday to surrender or face an assault, Ukrainian defence sources have said.

The head of Russia’s Black Sea Fleet Aleksander Vitko set the deadline and threatened an attack “across Crimea”.

He also reportedly told two warships to surrender or be attacked at 17:00 GMT on Monday.

Moscow says it is protecting civilians from “ultra-nationalist threats”, but its actions have been widely condemned.

Russia is now said to be in de facto control of the Crimea region.

With the images and videos we saw over the weekend I would say that “de facto control” is an understatement. There have been reports across alternative media of Ukrainians switching allegiance and of warships leaving Sevastopol already. RT reported Sunday that 10 ships have left voluntarily:

About 10 Ukrainian Black Sea Fleet ships have left the naval base in Sevastopol, with several vessels now heading to Odessa, administrative sources have said. The ships left the base voluntarily but some of them broke down and returned, they claimed.

If this is in fact true then it is unclear where the perceived resistance is coming from. Is it possible that there are just a couple of Ukrainian warships who will not submit? From all reports we have received it appears that Ukraine is frustrated but not attempting to resist. They have internal problems to deal with and it does not appear they are in any position to challenge Russia. As Paul Joseph Watson reported Sunday, Ukrainian interim Prime Minister Arseniy Yatsenyuk already perceived the occupation as a declaration of war.

The news of today would leave no doubt or room for debate. Russia is very serious about Crimea and will use force to control it.

Here are some links to stay abreast of the situation as it unravels:

Update 1:20 PM Central Time… The BBC and Fox News are now both reporting that Russian officials deny that any ultimatums were issued. I am not sure I buy this denial. Why did 10 warships already leave if the Russians are not forcing their hand in this situation? That question deserves an answer.