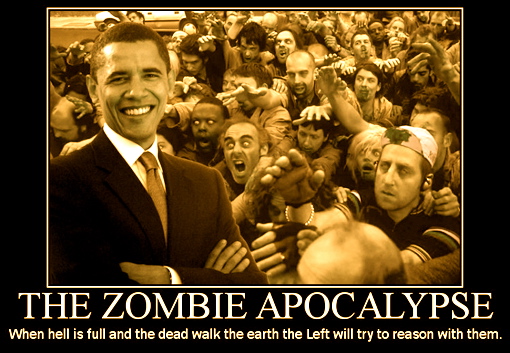 Apocalypticism has exploded in popularity and, while nuclear war and pandemics have always been a starting point, the concept of the Zombie Apocalypse trumps them all. The appeal and wild popularity of shows like The Walking Dead, movies like World War Z, and the slew of apocalyptic, gloom and doom series and specials on cable television continues to grow by leaps and bounds. But the reasons behind such interest are often subconscious at times and not fully understood.

The Leftist activist and agitator Noam Chomsky was recently asked “why there’s this preoccupation with the apocalypse and with zombies right now in our culture?” I concurred with the first part of his response which was that he felt the focus on zombies was “a reflection of fear and desperation” by “an unusually frightened country.” But quickly the obsessive liberal impulse to blame America first and foremost for all ills, real and imagined including the public’s obsession with a zombie apocalypse, rose irresistibly to the surface.

He went through the history of fear in popular culture as outlined in the book War Stars by Bruce Franklin.  Although the fear is embodied in various forms, he sees a common thread throughout:

“There are a couple of themes that run through it that are pretty striking. For one thing, one major theme in popular literature is that we are about to face destruction from some terrible, awesome enemy.  And at the last-minute we are saved by a superhero or a super weapon, or in recent years high school kids going to the hills to chase away the Russians, things like that.  That’s one theme that runs through constantly.  And there’s a sub-theme.  It turns out this enemy, this horrible enemy that’s about to destroy us, is somebody we’re crushing.”

“I think it’s, much of it is kind of just a recognition, at some level of the psyche, that if you’ve got your boot on somebody’s neck, there’s something wrong.  And that the people you’re oppressing may rise up and defend themselves, and then you’re in trouble.  And another is strange properties the country has always had of fear of invented dangers. There is a kind of paranoid streak in the culture that’s pretty unusual.”

And that’s about the best the Left can do I guess in trying to fathom the country’s fascination with a Zombie Apocalypse. It’s all just collective, subconscious guilt. Nice try, I suppose, but if that was a “hit or miss” explanation it’s far closer to a miss than a hit.

There is indeed a vast undercurrent of suspicion, unease, paranoia, division, worry, pain, and even trauma right underneath the surface of the national consciousness. I believe it is manifested in the popularity of zombie themed entertainment and the concept of the doomsday scenario in general in popular culture. The feeling that things are rapidly unraveling and coming apart is a constant theme in social media and shared by vast swaths of the population, not to mention visualized in everything from backyard bunkers to Zombie apocalypse decals, Facebook groups, and bar crawls.

Collectively, we have lost our belief in a positive future.

The truth is that the American political system has been dysfunctional for decades and the country seems to have become functionally insane since the attacks on 9-11. The fears and rage unleashed that day has, in turn, unleashed a fast-growing and aggressive slew of government agencies, policies, and powers. Recent revelations have made us aware that the turn-key tyranny, 1984 surveillance state is upon us with every cell call made and every internet email, photo, comment, and social media post recorded and sucked into gargantuan government databases for no discernible or reasonable reason that the average person can fathom.

Two unpopular wars and the eventual election of the most intellectually bankrupt, corrupt, radical, and left-wing President in American history has only further divided an already deeply divided nation. Not since the Civil War has the nation been as polarized as it is now and the hatred that exists between the Right and the Left is real and palpable as each bitterly blames the others for every economic, societal, cultural, and policy ill that one can imagine.

The once powerful Republic is basically bankrupt and the financial system living only on borrowed time and credit. And a myriad of federal agencies and vast numbers of the citizenry are frantically arming themselves and stocking up on ammunition in a frenzy that shows no sign of abating. The country increasingly has no sense of itself and is flooded with everything from vast hordes of illegal immigrants to bitter cynicism while the traditional pillars and institutions of the State and society are under unceasing attack from all sides. The once proud partners, logic and common sense, lay rotting in the gutter having been slain by our progressive comrades when they were perhaps most needed.

In the end, the citizenry can sense that we are on the wrong path and that something is deeply and fundamentally wrong with the country and the direction is it headed. They may not understand why and may even vote for certain political parties and politicians that are leading them down the wrong path. But they understand it is there and that it is real.

As the vastly powerful American Empire begins to totter its societal values decay and its internal cohesiveness unravels. The New Rome begins to mimic the Old. And when the greatest empire of the ancient world did fall it ushered in an era of darkness that lasted nearly a thousand years. Perhaps such unconscious fears and realizations by the populace of what their society, culture, and nation could possibly undergo (economic collapse, dirty bombs, bloody revolution, EMP induced dark age etc.) is mirrored in the depictions of a final, gory, and horrible apocalypse on-screen.

If there’s a single theme at the heart of The Walking Dead and similar shows, it is the fragility of civilization. And as it continues to unravel at breakneck speed, fear of the future manifests itself in interesting ways.