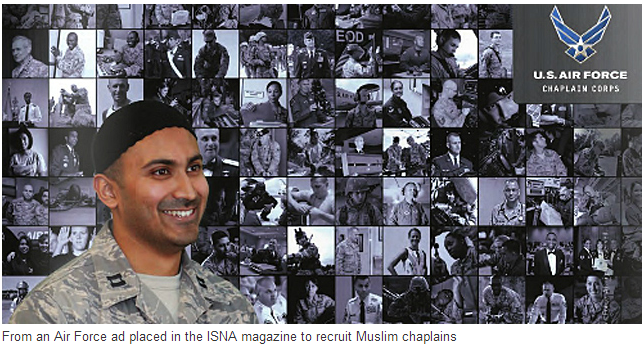 If the US military doesn’t know better, then who are we to trust with our defense? Ourselves. Remember that.

There have been over 22,000 deadly Islamic attacks since 9/11 — each one with imprimatur of a Muslim cleric. You would have thought Anwar Awlaki, Pentagon darling and leading jihad cleric, might have taught the DoD a thing or two.

As Obama plans to reduce the size of the military, he’s simultaneously increasing imams in the military.

The Islamic Society of North America (ISNA), a U.S. Muslim Brotherhood entity, is proudly announcing that the U.S. military is again using their chaplains for active-duty service after a 15-year lull.

ISNA has a well-documented extremist history. In 1991, the Muslim Brotherhood listed ISNA as one of its main fronts. Declassified FBI memos said ISNA is a component of the Muslim Brotherhood, who sees its “work in America as a kind of grand jihad in eliminating and destroying the Western civilization from within.”

In 2007, the U.S. government labeled ISNA a U.S. Muslim Brotherhood entity and an unindicted co-conspirator in a terrorism-financing trial involving the Holy Land Foundation funneling money to Hamas. The label was upheld in 2009 because of “ample” evidence linking ISNA to Hamas. Last year, ISNA’s Canadian affiliate lost its status as a charity because of its accounting discrepancies and links to Pakistani terrorists.

Here’s what’s really “problematic”: The U.S. government says ISNA is a Muslim Brotherhood entity and labeled it an unindicted co-conspirator in a terrorism trial. That same government is using ISNA to pick military chaplains and is a top outreach partner of the U.S. government.