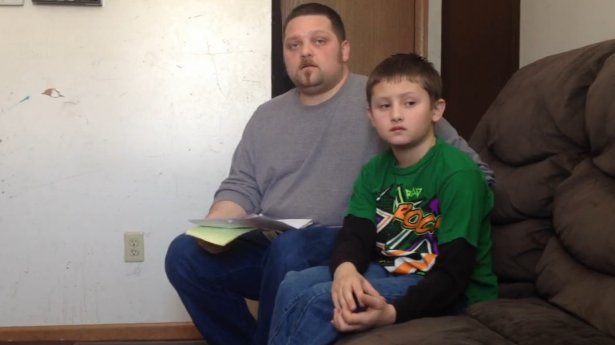 A 10-year-old boy was suspended for three days last week for pointing a “lookalike firearm” at another student.

The lookalike firearm was the boy’s FINGER.

That’s right – Nathan Entingh, a fifth-grader at Devonshire Alternative Elementary School in Ohio, was suspended for pointing a finger gun at the back of another kid’s head.

The suspension letter referred to the finger gun as a “level 2 lookalike firearm”, which is a ridiculous Orwellian-sounding term for something completely harmless.

“I was just playing around. People play around like this a lot at my school.”

But the school district isn’t playing around – they have no tolerance whatsoever for such shenanigans.

Jeff Warner, the district spokesman, told The Columbus Dispatch that Devonshire Principal Patricia Price has warned students about pretend gun play numerous times this year, and everyone should know the rules by now. Nathan put his finger to the side of the other student’s head and pretended to shoot “kind of execution style,” Warner said.

“The kids were told, ‘If you don’t stop doing this type of stuff, there would be consequences,’” Warner said. “It’s just been escalating.”

The boy’s father, Paul Entingh, pointed out that no one felt threatened, as the other student didn’t even see Nathan make the gesture. Paul says it’s the adults who are acting childish in their response to typical 10-year-old behavior:

“He said he was playing. It would even make more sense maybe if he brought a plastic gun that looked like a real gun or something, but it was his finger.”

Unfortunately, the overreaction to these kinds of incidents isn’t limited to Nathan’s case. The Columbus Dispatch provided examples of similar events in Columbus City schools:

Thankfully, some politicians find these cases and “zero tolerance” policies absurd and are working to change them. State Sen. Charleta Tavares, a Columbus Democrat, proposed legislation that would overturn a 1998 state law requiring schools to adopt zero-tolerance policies. Her plan would force schools to remove those policies and forbid them in the future because she said they lead to unfair punishments.

When she introduced her bill last year, Tavares referenced the suspension of a 7-year-old Maryland boy who was suspended for chewing a Pop-Tart into the shape of a gun:

“A gun-shaped edible snack is not a weapon.”

Last December, a kindergartener in North Carolina was given one day of in-school suspension for making a gun gesture with his hand while playing “army” on the school playground.

The same month, a 10-year-old boy in Pennsylvania was suspended and threatened with expulsion for mimicking shooting a bow and arrow while playing with another student.

A 6-year-old boy was almost given detention and suspension from riding the school bus after he brandished a tiny toy Lego gun and, according to the bus driver, caused hysteria and trauma for the other passengers. Thankfully, surveillance video revealed that the bus driver overreacted, and the child’s punishment was rescinded.

Last October, an 8-year-old Florida boy was suspended for pointing his finger and saying “pow pow.”

How about implementing some common-sense policies in schools?

Perhaps young Nathan summed up his situation best. When asked what he thought of his suspension, he said:

“I was thinking it was dumb.”