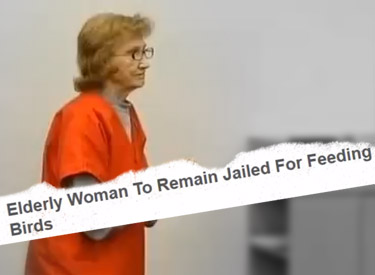 An elderly woman violated her probation by leaving bread crumbs out in her yard for crows and will remain behind bars. 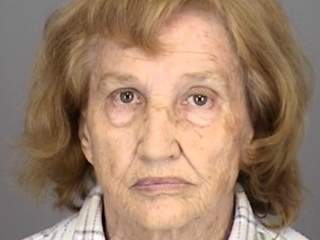 Eighty-one-year-old Mary Musselman was first arrested last month for feeding bears in her backyard. One of the bears was euthanized over it because the Fish and Wildlife Service said the bears might learn not to be afraid of people anymore and then get aggressive.

The judge in the case warned Musselman not to feed any more wild animals of any kind:

A judge gave her probation at the time, and made it clear: Do it again, and go to jail.

She did, was arrested in January, and the case ignited controversy when Musselman was held without bond.

Apparently where it got really serious is when officers recently went by to check on her home (as they reportedly did over and over) and found bread crumbs in her yard one day:

Her attorney, William Fletcher, told FOX 13 that officers issued a new arrest warrant after checking on her home and seeing that she was leaving bread out for crows.

That violates her court order not to feed any wild animals.

Yep. An elderly lady was caught leaving out pieces of stale bread for the birds.

This is a clear violation of her probation not to feed any wild animals — even birds, apparently.

(What is this, an Alfred Hitchcock movie?)

She was arrested and put back in jail.

Her attorney has argued that his client is mentally ill, suffering from Alzheimer’s and Dementia, and should be allowed to live with her brother under supervision. The judge instead ordered that Musselman remain in jail until she receives a more thorough mental evaluation.

Sure, this lady may have mental health issues, but being left in jail for the crime of…feeding birds? Is that really in her best interest (or that of, well, anyone else including her elderly husband who is ill and now all alone)?

So the mega banks are too big to fail or prosecute, and the lobbyist-bought politicians and criminals on Wall Street can roam free to continue to wreck the country hand over fist, but we’re jailing elderly people for sprinkling a little stale bread in their yards for the birds?