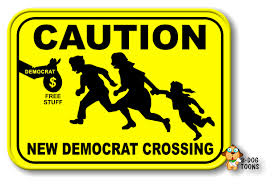 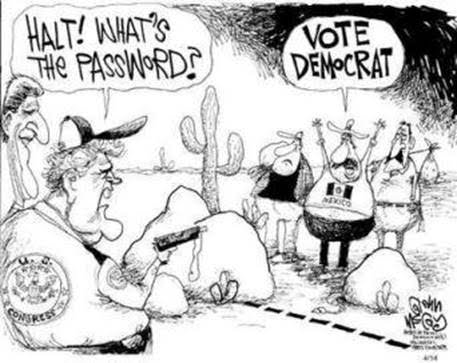 According to a theory by conservative commentator Ann Coulter, the demographics are changing but these changes are not natural, but orchestrated – changing by force. At a panel held in National Harbor, MD, sponsored by Eagle Forum and the Center for Immigration Studies, Coulter asserted that immigration is the most important issue to conservatives. Coulter was not the only one in attendance to echo the sentiment that immigration was an important issue to conservatives. Eagle Forum President Phyllis Schlafly agreed.

Coulter stated to the attendees that legal immigration has quadrupled in the last four decades – an increase that has not been natural but part of the Democratic plan to increase their vote share thanks to a 1965 law. The 1965 bill introduced by Sen. Ted Kennedy (D-MASS) “dramatically increased immigration from 9.7 million in 1970 to 40 million by 2010. Immigration has doubled since 1990 and tripled since 1980,” according to the Eagle Forum report. According to Coulter, by giving legal status to more illegal immigrants, it would “doom Republicans to generations of losses.” She followed up by saying the increased number of immigrants helped Obama defeat Romney in 2012.

Not only was it the number of people voting who should not have been voting because of citizenship status that helped Obama defeat Romney, it was rampant voter fraud by registered voters casting more than one ballot and reports of ballot machine tampering that put the fakester back in the People’s House.

Coulter stated, “I also don’t think you can remind people enough Democrats have not been winning people through their dazzling arguments. They have changed the voters and in the 2012 election, if the country had not changed, by force, on purpose, by people trying to harm this country, i.e. Ted Kennedy, Romney would have won a larger landslide against Obama than Reagan won against Carter in 1980, because he won 4 points more of the white vote. Back in 1980, the country was nearly 90 percent white now.”

According to The Blaze:

Eagle Forum President Phyllis Schlafly termed Republicans who support any type of amnesty or continue to allow immigration of foreigners who reject conservative views and vote Democrat as “fools.” Citing the results of polls, Schlafly reiterated, “They all come to the same conclusion, that Hispanic and Asian immigrants want a bigger government providing more services rather than what conservatives want, which is less spending and less government.”

So, these individuals immigrate to America to partake of the dream of freedom only to resort to supporting a freedom-draining establishment in the Democrat party and the RINO camp. If living under freedom is such a strain for these “new” citizens and illegals, the simple solution is to leave by the same way they came here. I’m sure the door won’t hit them too hard in the rear when they go.

But, as Coulter has indicated, this may be the plan all along – turn the US into a third world cesspool easily “ruled” by despots and tyrants since these newcomers can’t seem to leave their previous country’s government’s control behind. These immigrants stepped out of their comfort zone, found they couldn’t handle it and desired to go back to what they know. That’s fine. Not everyone is equipped to handle freedom such as what America offers. There is no shame in admitting failure to assimilate into the culture of liberty and recognition of individual God-given rights. The failure of immigrants to assimilate to America has been seized by politicians at all levels of government to serve their own anti-freedom, power-grab agenda.

Coulter was reported as saying it was like “invasion of the body snatchers.” It is confusing why many conservatives would support the addition of voters who, in the end, would undermine everything on which conservatives stand. In her example, she cited New Yorkers going to Florida and voters in Massachusetts going to New Hampshire. In both of these cases, the voters move because of taxes but then continue to vote for Democrats who raise taxes.

“Those are the only two groups who benefit. Lobbyists accessing lots of government services, Democrats benefit because we’re soon approaching a point where Republicans never win another election,” Coulter said. “If we stop it now, there is still time. Business benefits because they get cheap labor – cheaper and cheaper and cheaper labor. Is it that Boehner wants to go to work for a lobbyist himself, is it all these guys around him, congressional staff, they want the job lobbying. I suspect a lot is the staff and Republicans just don’t hear the truth.”

Personally, I don’t think it’s that Republicans don’t hear the truth. They hear the truth and they know the truth, but some just ignore it while others are just RINOs. Neither side cares one spits worth about America or the American citizen. The only thing worthwhile to them is keeping their position of power and influence at all costs.

Isn’t it the Democrats and RINOs who think that requiring ID to vote is racist because minorities, the elderly and immigrants have difficulty obtaining ID? Yet, these same two faced snakes placed in the Obamacare legislation that everyone must present ID when enrolling through the exchanges. Immigrants somehow managed to obtain visas, passports and other necessary paperwork to enter this country or they managed to scale a border fence, sneak past the border patrol, and walk miles in the heated desert to get to the nearest town. Obtaining identification to vote is too much of a hurdle for immigrants and minorities according to Democrats and RINOs. Amazingly, many Americans buy into this pile of manure – they’re called liberals – and fail to see the hypocrisy for the tease.

Amnesty and illegal immigration serves the purpose of the politicians, not the citizens of America. Our borders need to be secure, period, and our immigration laws enforced. Americans should demand no less. At some point, America won’t be able to accommodate the influx of new people. In fact, that tipping point may be close to being be reached.