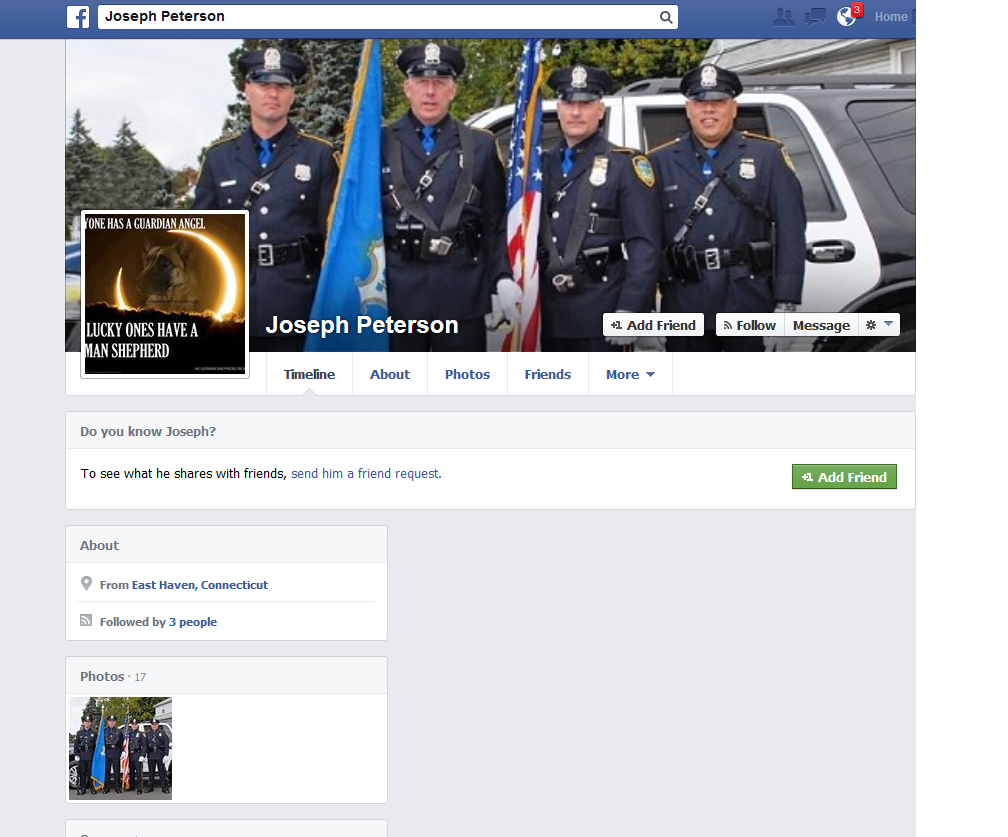 On Saturday, I informed you of a Connecticut police officer who said he wanted to bust through one patriot’s door and take his guns. This morning I spoke with John Cinque via telephone and he provided me with screenshots of the conversation that he mentioned in the video. Many people wanted to see the evidence of what John referenced in the video. Some thought it was nothing more than ploy since he was in the video with Connecticut gubernatorial candidate Joe Visconti. I won’t attempt to judge Visconti’s motives. However, the evidence is clear of what Officer Joseph Peterson of the Branford Police Department said, and in the course of the conversation actually spilled the beans on what gun registration is all about: Taking your guns, which every red-blooded, American gun owner knows already. Take a Look for yourself:

This article was written prior to speaking with the Branford Police Department’s Captain Geoffrey Morgan. Due to the efforts of a concerned citizen, Branford PD has begun an internal investigation. Freedom Outpost has learned that Officer Peterson has been placed on extended leave pending the investigation by Internal Affairs.

In the update to the previous article, we informed you that Freedom Outpost had obtained the entire conversation, which took place on Facebook, that John Cinque referenced in this video. Below is the substance of those comments and why it is important that we understand the mindset of Officer Peterson and law enforcement officers like him. (The quotes below were made on Facebook and there are a lot of issues with spelling and grammar, so for those who are sticklers over that, I’m just warning you. The links are to the actual screenshots.)

Peterson told several gun owners, some of whom he engaged were not from Connecticut,

While it is disturbing that an active law enforcement officer would say such a thing, consider the fact that he then went after another Facebook user by saying he was a “criminal law breaking psycho.”

Even more telling is Mr. Peterson’s response when those he is engaging over the issue of police enforcing laws such as the one in Connecticut, which require citizens to register their semi-automatic rifles and high capacity magazines. The fact that Mr. Peterson can’t distinguish between a semi-automatic rifle and an “assault weapon” should also raise concern.

Peterson was accused of wanting to enforce “Nazi policies,” which he said were “not nazi policy…,” but “a state statute.”

Sadly, history is not on the side of Mr. Peterson when it comes to this issue.

In fact, when it was brought up that Nazis could not use the excuse he was providing when it came to dealing with the Jews, he sounded just like the Nazis at Nuremberg and attempted to escape the ultimate logical conclusion of his position.

While Peterson said that he didn’t see what the big deal was to simply register the weapons, claiming that “Nobody wants to take his weapon…they want to take it because he didn’t register it…,” he then spilled the beans on why people don’t want to register their guns. When asked, “Why do they want it registered? For what purpose?” Peterson said, “So they know who’s got them (sic) that’s what the purpose is (sic) there’s no use for assault rifles anyways (sic) you want to own a register him just like your car.”

Here is where he tells gun owners what they already know: Gun registration leads to confiscation. If you don’t register your guns, which were previously legal before the law, they’re going to take them. If you do register them, it isn’t a matter of safety, it’s a matter of knowing who has what kinds of guns. Why is that important? Logically, it is to find them, when they enact the next step in their process, which is full gun confiscation, and as Mr. Cinque noted in his talk last year, none of this protects anyone nor does it stop mass shootings. It merely will define law abiding citizens as criminals.

Again, notice that Peterson cannot distinguish between the two kinds of weapons involved here. Peterson also attempted to draw a parallel between registering an automobile and a gun.

However, it is the demeaning nature of Peterson’s comments that indicate that he knows this won’t do anything. As one commenter pointed out, registration is simply another way to be taxed, and it is. However, Peterson scolded the commenter telling him to move somewhere else so he can “play with (his) rifle and not hurt anyone.” Think about that. Are people being hurt by law abiding citizens with semi-automatic rifles now in Connecticut? How would registering such a weapon keep anyone from hurting anyone? It won’t, but Peterson has already told us why they are doing it: It’s so they will know who have these rifles and who doesn’t. It’s not about safety, just like John Cinque told Republican representatives last year.

Peterson also told others that they were not going to fire their weapons in their homes in a residential neighborhood, presumably for protection, “because if it goes through the walls into a neighboring house and kills someone then you will truly be a felon.” One wonders how registering any gun will keep that from happening. In fact, according to Peterson, policemen have registered their semi-automatic rifles that they use. I wonder if they will be felons if they fire in a residential neighborhood and kill someone. I’m betting the will be handled a bit different, don’t you?

Peterson then mocked a commenter’s position connecting gun registration to confiscation. “Nope not at all still not an excuse to break the law (sic) register your gun and you won’t be breaking the law… you say the criminals don’t have to register theirs… what’s that if you can’t beat them join them mentality…,” he wrote. “But if it’s a law I enforce it (sic) I don’t make them.”

Then out of nowhere, Peterson played the race card. “Hey everyone good luck with Cameron who (sic) he comes to your door as a medic if you’re a racist like he is a (sic) don’t see how he could give your good medical care.”

This instance was completely off topic and no one still has a clue where or why it even came up.

John Cinque finally commented. According to Cinque, he and Peterson have been friends a long time, still John encourages others that not all in the Branford Police Department are like Joseph, nor do they think like him. He also responded to the comment by Peterson, in which he claimed that he didn’t get to pick and choose which laws he enforced. In other words, from Peterson’s perspective, if it’s a law, even an immoral one, he would enforce it. This is important as he was given the scenario that took place in Nazi Germany which led up to mass exterminations, along with gun confiscation.

Cinque simply reminded Peterson, “I am glad there (sic) a good cops like you double do your job and follow orders no matter what (sic) then again there was something in our past call the Nuremberg trials but that’s for another conversation. And Joe they absolutely do want to take the guns all of them but then again that is for another conversation.”

If you think the conversation was going down at this point, you would be right. Peterson encouraged everyone to register their rifles and magazines and then if they came to confiscate them fight. Well, now, why would he want them to fight? After all, confiscation would be part of that whole “enforcing the law” thing that he was on a diatribe about, right? Does he not realize he’ll be the one doing the confiscating? Or will he have a breakthrough moment and say, “Hey, wait a minute, I can’t do this”?

John Cinque implored Peterson to remember that he is not the only one in his house, but he is the only one that has access to his weapons; so he reminded Peterson that if he were to come to his house for his guns not to shoot his son, who might be holding a XBOX controller, or his wife holding a cell phone.

Peterson went on to claim that John was making threats, when in reality all Cinque had done was to simply affirm his position of non-compliance in registering his guns. Cinque told him there was no threat. He also indicated that he never said he would win if the police showed up, but did finish by stating, “Last time I checked I still have my First Amendment rights…unless you want those also.”

Peterson even went on from what he perceived as a threat to mock John’s Christian faith saying, “Be nice John you carry the bible right? Then don’t talk like a man that doesn’t.”

Cinque responded, “Don’t know what my faith in Jesus Christ has to do with my comments above… othe than the fact that my freedom is granted to me by God… not man… but that is a conversation for a whole other thread.”

Clearly, the conduct and language in the interaction is unbecoming of a law enforcement officer. However, that aside, the realm that we are now moving into where history is not even being acknowledged about the road we are going down and how willing law enforcement is willing to go down that road with corrupt political leaders should be enough to alarm anyone.

If you are interested, here are the complete files of screenshots provided to Freedom Outpost. You can download them here.

UPDATE: We received a press release from the Branford Police Department earlier, but it had to be cleared. The Press Release reads as follows (Thanks to Captain Geoffrey Morgan). You can download it here.

The Branford Police Department has launched an Internal Investigation into the allegation that an officer, while off duty, made certain comments during a conversation on Facebook that were later posted on the internet.

Chief Kevin Halloran confirmed the allegation and said, “We treat every allegation concerning our agency with the utmost of seriousness. This, like any other allegation will be thoroughly investigated and if any law, departmental rule or regulation has been violated the officer will be held accountable.”

Chief Halloran noted that the officer involved currently is on an extended Workers’ Compensation Leave.

Any inquires can be addresses to:
Captain Geoffrey Morgan
Administrative Division / P.I.O.
Office: 203-315-3914

Tim  Brown is the Editor of Freedom Outpost.