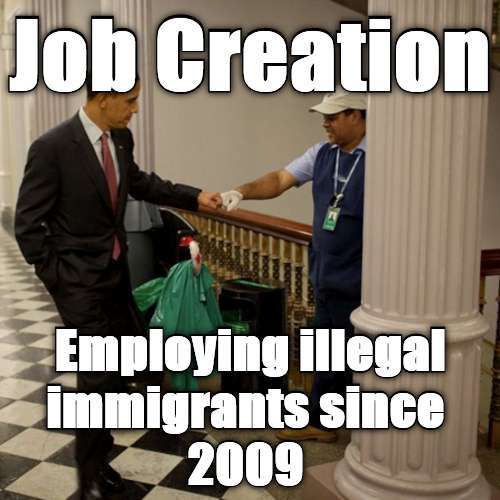 According to Article 1, Section 8 of the US Constitution, “The Congress shall have Power to provide for calling for the Militia to execute the Laws of the Union, suppress Insurrections and repel Invasions.”

The 1828 Noah Webster Dictionary defines “invasion” as: 1) a hostile entrance into the possessions of another, particularly, the entrance of a hostile army into a country for the purpose of conquest or plunder, or the attack of military force…; 2) an attack on the rights of another, infringement or violation; 3) attack of a disease, as the invasion of a plague, in Egypt.

Since it is the responsibility of the federal government to protect the United States from “invasion,” why is it that “top administration officials have directed 21,000 border patrol officers to retreat whenever illegal immigrants throw rocks at them, and to avoid getting in front of foreign drug smugglers’ vehicles as they head north with their drug shipments?”

According to a report in the Daily Caller:

“Agents shall not discharge firearms in response to thrown or hurled projectiles… agents should obtain a tactical advantage in these situations, such as seeking cover or distancing themselves,” said the instructions, issued March 7, under the signature of Michael Fisher, chief of US Border Patrol.

Agents were also directed to keep their weapons holstered when drug smugglers drive by.

Agents can’t use guns against “a moving vehicle merely fleeing from agents,” say the instructions.

The new instructions do allow agents to use guns to defend themselves from vehicles that drive at them. “Agents shall not discharge their firearms at a moving vehicle unless the agent has a reasonable belief that … deadly force is being used against an agent,” the new instructions say.

However, the instructions also suggest that officers be penalized if they don’t step back. Agents “should not place themselves in the path of a motor vehicle or use their body to block a vehicle’s path,” according to new instructions.

Isn’t nice to know all our government is doing to protect the American public from harm via criminals running across our Southern border illegally? Interestingly enough, these new rules are reported to match the recommendations of an advocacy group that seeks to reduce the policing of illegal immigration.

Only in the America of today can you announce being in favor of violating the Constitution, commit treason and support invasion without threat of trial, imprisonment or death. Kid yourself not, this is invasion. Illegal individuals cross our borders with the intent to commit illegal activities such as providing illegal drugs, plunder our resources through accessing of social programs, and conquer our country through engaging in activities reserved for citizens, such as voting. Is this true in all cases? Probably not. However, if the intent of the immigrant is to come to America for legitimate means, the laws of immigration and naturalization exist for that purpose. Granted the system is slow. But, if the immigrating individual means to acclimate to American society, the first rule is recognition and respect for the rule of law. Crossing the border illegally shows contempt and disregard of the law, any way you slice it and dice it, making the individual a criminal.

These “new instructions” for our border patrol agents were challenged by mid-level DHS officials, “who argued that the rules barring self-defense from rock throwers ‘could create a more dangerous environment [especially for agents operating] in rural or desolate areas, often alone, where concealment, cover and egress are not an option,’ according to a report in the Los Angeles Times.”

According to the Los Angeles Times, it appears Mexican authorities have complained about US border patrol killing Mexicans – Mexicans who have illegally crossed our borders and have engaged border patrol agents.

So, how many people have our US border patrol agents killed that has prompted such a complaint from Mexican authorities? According to the Police Executive Research Forum (PERF), commissioned by top DHS leaders, found that “law enforcement agents had killed roughly seven (7) people a year along the 1,933 mile border in 2010, 2011, and 2012. The shootings came during 67 clashes with huge streams of armed drug-smugglers and illegal immigrants.” That is a total of 21 people in three years. With the complaint from Mexican authorities, one would have thought it would be in the hundreds or thousands.

If Mexican authorities don’t like our border patrol agents killing criminals when necessary, then the Mexican authorities need to tell their citizens to remain on their side of the border or risk being shot, even though it’s unlikely they would be shot.

Fisher, who signed off on the new instructions, admitted that “agents have been attacked 6,000 times since 2007. They’ve been ‘assaulted by rocks’ 1,713 times since 2010, and have responded with deadly force only 43 times.”

Couldn’t assault by rocks result in being stoned to death if enough illegals attacked an agent in a desolate area where communication is disrupted where back-up is unavailable to the agent? I would say yes which indicates to me the use of rocks as a form of deadly force. Maybe, Mr. Fisher needs to throw a rock or two at a local police officer or try to drive away from law enforcement officers with children in his van and see what happens. In the latter case, Americans are shot at by law enforcement officers with the intent to stop the vehicle by any means.

Never fear, our agents will be equipped with short-range tasers, pepper spray and medium-range pellet guns. DHS is bringing out the “big guns” to deter illegal border crossings.

Those who advocate for a reduction in the policing of illegal immigration are supporting the continued proliferation of a criminal element in our country; a criminal element that includes drugs, prostitution, human trafficking, kidnapping, rape, murder, assault and theft by every means. It seems the Democrats and RINOs support a country filled with a criminal subculture and anarchy or they would not support amnesty, emasculation of our border forces or military or any type of “gun confiscation” legislation. However, this is their platform. It is a platform designed for one purpose – unnatural manipulation of the demographic to get more votes to maintain power and control in order to exercise more power and control.

America has moved from a citizen legislature to an elitist legislature – a legislature filled with vile, disgusting, anti-American ideology that seeks to control whatever population it can through any means that it can, while maintaining the “elite” as above the law and kept in lavish style. What Congress needs to learn is criminals do not obey laws, even the laws passed by the ruling power – a lesson they should know by just looking at the occupant of the People’s House. Criminals operate under anarchy and anarchy does not follow gentlemanly rules.