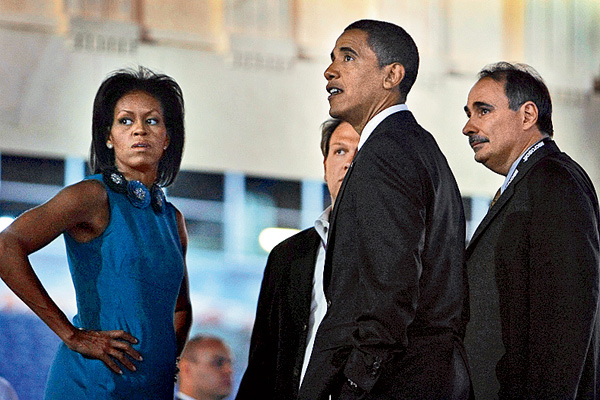 Taking a page out of George Orwell’s 1984 – where words were banned by a totalitarian state to limit thought – Michelle Obama has thrown her weight behind a campaign to ban the word “bossy”.

“Every time you stretch your mind, you boost your confidence.” —The First Lady encouraging girls to lead #BanBossy pic.twitter.com/mHOhf4VVWz

FLOTUS tweeted her support for the campaign, which is receiving national media attention having been backed by celebrities such as Beyonce. Apparently, Beyonce (as well as Sony Entertainment which also supports the campaign) isn’t too concerned about the fact that her husband – and the Obama’s close personal friend Jay-Z – routinely refers to women as “bitches” and all kinds of other vulgarities in his songs.

Critics immediately shot back at Obama for lending her support to such a chilling notion, making comparisons to Orwell’s infamous ‘Ingsoc’.

Remember when Bush's White House banned words they didn't like, and the MSM was totally cool with it? Me neither. @FLOTUS

*This message brought to you by INGSOC* @FLOTUS pic.twitter.com/CaLfwTPsit

“Girls are less interested in leadership than boys and that’s because they worried about being called bossy,” claims the campaign video. The solution is to ban the word altogether by encouraging parents, employers and teachers to strip it from their vocabulary and re-educate any poor unsuspecting bigot who dares utter it in public.

Illustrating once more how feminism is a top-down tool of cultural marxism – where language and culture takes the blame for all oppression thereby absolving the state, which is the true source of oppression – the campaign is the work of LeanIn.org, which itself is supported by a plethora of big banks, transnational corporations and PR firms.

Second wave feminism does little or nothing to advance genuine women’s right concerns – such as the recent designation of female drivers as potential terrorists in Saudi Arabia – and everything to hide behind the veil of equality as a justification for trampling on everyone’s free speech rights.

Given that literature is replete with examples of sexist, patriarchal and outdated language, forget just banning words, why don’t we start burning books? It’s for the children!

Mainstream feminism’s disdain for free speech is setting the stage for Hillary Clinton’s tilt at the presidency in 2016, which is why top Democratic Party operates like Debbie Wasserman Schultz are also backing these kind of PR campaigns.

Just as critics of Obama were labeled racists for questioning his policies, Hillary’s detractors will be smeared with the “sexist” tag when they dare to speak out.

The ‘ban bossy’ campaign video, featured below, is fast being overtaken by negative comments as the whole farce is rightly condemned for what it is – an onerous attempt to set a dangerous precedent of banning words and restricting free speech in order to fix non-issues contrived by cultural marxists.

Then again, I may just be a sexist thought criminal who needs to be re-educated and have his vocabulary forcibly reduced by means of a full frontal lobotomy – after all, it’s trendy and liberal!