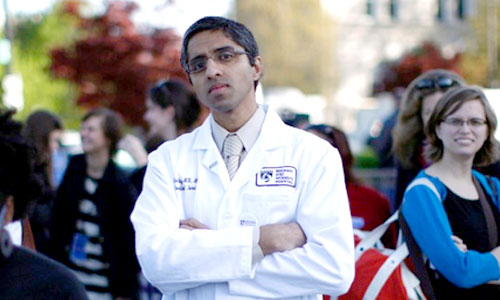 According to the Obama administration, guns, any and all, are a public safety issue that needs to be addressed which means any legislation will ultimately end in confiscation. Their stance on guns is based on faulty logic that has failed to gain widespread momentum. However, instead of recognizing the right to bear arms as inalienable, this administration seems determined to find other ways to skin the Second Amendment cat.

Guns, according to Obama’s political ally and nominee for Surgeon General, are a health care issue. Dr. Vivek Hallegere Murthy, president and founder of Doctors for America, considers gun ownership a public health issue instead of a God-given right that shall not be infringed and advocates for doctors questioning their patients about gun ownership/possession. In order to bolster his stance on guns, Murthy believes more taxpayer funded research is needed to prove that fewer guns means a lower crime rate, despite the fact that numerous reputable research studies have concluded the opposite.

Murthy has been very vocal about his stance on firearms. In a tweet before the 2012 presidential election, Murthy tweeted, “Tired of politicians playing politics w/ guns, putting lives at risk b/c they’re scared of the National Rifle Association. Guns are a health care issue.” Then, in December 2012, after the “tragedy” in Newtown, Murthy, echoed anti-gun sentiments in this tweet: “NRA press conference disappointing, but predictable – blame everything in the world except guns for the Newtown tragedy. #wakeup.”

According to Investors Business Daily:

Doctors for America has also promoted the invasion of privacy by doctors by allowing them to ask patients if they have guns at home, including asking children if their parents own guns, and pushing back against Florida Gov. Rick Snyder’s decision to sign into law a bill prohibiting doctors there from asking the question.

He [Murthy] would have doctors counsel their patients against exercising their Second Amendment rights.

Before the organization was Doctors for America, it was known as Doctors for Obama in 2008 and more recently, in 2011, the organization lauded itself in the “Docs vs. Glocks Campaign” in Florida. Murthy’s organization supports licensing of guns, limits on ammunition purchases, and a mandatory 48 hour waiting period and the provision in Obamacare along with other federal regulations that prohibit doctors from inquiring/documenting gun ownership.

According to the website about the Surgeon General, “As the nation’s doctor, the Surgeon General provides Americans with the best scientific information available on how to improve their health and reduce the risk of illness and injury.” While the position is not one that majorly participates in the formulation of policy, this office has a strong voice when it comes to issues related to public health. And, since the Obamacare legislation designated the Surgeon General the chair of the new National Prevention Council, “which provides coordination and leadership among 20 executive departments with respect to prevention, wellness and health promotion activities,” the influence over policy making in areas under the National Prevention Council would be enormous.

Since Harry Reid (D-NV) has invoked the “nuclear option” for presidential nominees, one could almost say Murthy is a “shoe-in” for the position.

Catherine Mortensen, spokeswoman for the NRA, stated, “This is so big we are scoring it. We sent out notifications to our 5 million members asking them to contact their senator to vote against this nomination.”

Mortensen contends the Surgeon General must be someone the public trusts, who is independent and without political agenda. “The surgeon general has the important task of providing information to people to help them make better decisions about health care. It’s a position that requires trust and leadership…. The American people deserve to have confidence in their surgeon general.”

Obama’s current nominee is nothing more than a plant, a way to stack the deck in favor of ever increasing gun confiscation legislation and a way to “brainwash” the mindless masses. Regardless of the numerous studies indicating more firearm ownership equated to less crime, this administration chooses to ignore facts in favor of the behind the scenes move toward tyrannical rule over the citizens these straw-men are supposed to represent.

The Second Amendment is clear and unambiguous. If an individual does not want to own a firearm, they are perfectly free to choose to be unarmed. However, God instilled in every individual the right to self-preservation which means the desire to protect oneself and/or loved ones from harm along with the desire to be free, devoid of slavery. The United States was not established as a democracy or a nation governed by the minority, but a representative republic whereby individual God-given rights were to be preserved. It’s a pitiful shame that so many in America are willing to relinquish their rights on the whims of the “ruling” idiocracy. Once the Second Amendment has been abridged, all other rights will certainly be abolished, even the right to life; history, regardless of the attempts to re-write it, proves that fact clearly.