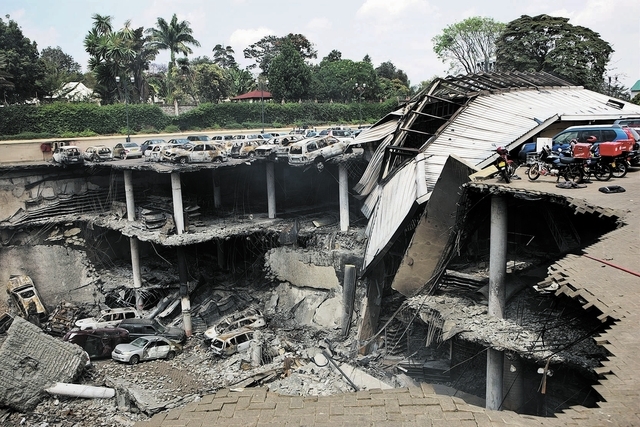 He says that what he is teaching is “true Islam,” and that it involves murder of the kuffar. He’s a cleric. He has dedicated his life to understanding Islam. We’re supposed to believe he’s another “misunderstander”?

Obviously there are Muslims all over the world who also believe this is “true Islam,” as they slaughter infidels with the blessings of Muslim clerics like Makaburi in Nigeria, Egypt, Syria, Israel, Iraq, Pakistan, Burma, Thailand, Indonesia, the Philippines, and elsewhere. Yet in the U.S. and Europe, and in Australia as well, if you say this is “true Islam,” or even that Makaburi said it was “true Islam,” you’re a racistislamophobicantimuslimbigot.

The denial is total, the attachment to unreality complete. But the jihad bombs will keep on exploding, and the jihad rifles will keep on shooting, no matter how much those who are sworn to protect us pretend that “outreach” to the “Religion of Peace” will solve the problem.

Mombasa — When Islamist gunmen stormed Nairobi’s Westgate shopping mall on a busy Saturday in September, the ensuing carnage also intensified fears that Kenya’s homegrown Islamists were on the rise.

Although the attackers were from Somalia’s Al-Qaeda-inspired Shebab rebels, the group’s ability to infiltrate and operate in Kenya, as well as find a stream of willing recruits, has focused attention on radical Islamists based down the coast in the Kenyan port city of Mombasa.

At the heart of the steamy port hub sits the Musa mosque, seen by Kenyan authorities as the epicentre of a new terrorist threat. Its key figure, Abubaker Shariff Ahmed, better known as Makaburi, does little to hide his firebrand leanings.

“It’s our innocents for your innocents. It was justified. As per the Koran, as per the religion of Islam, Westgate was 100 percent justified,” the Muslim cleric said of the attack that left at least 67 dead, among them women and children cut down by machine gun fire or grenades.

“Are the ones being killed and raped in Somalia not innocent?” Makaburi said in an interview with AFP in his austere Mombasa office, seizing on Shebab’s justification for the mall attack — Kenya’s military presence in southern Somalia.

“The KDF (Kenyan army) is doing the same thing and worse in Somalia than what happened at Westgate. So as per the Islamic religion, they had every right to avenge whatever the KDF is doing in Somalia.”

Makaburi asserted that no real Muslims died in the upmarket, part-Israeli-owned mall.

“How come a Muslim is at a shopping mall instead of being at a mosque?” he said, adding that the “Americans and the Western governments are killing innocent people all over the world everyday, they’re bombing weddings, funerals.”

“How come the pilots of the drones are not labelled as terrorists? How come when we Muslims are being killed by the Americans using drones, by the British, by whoever, by the West, it’s nothing, but when you have a single non-Muslim killed by a Muslim, it’s terrorism?”

In August 2012, the Musa mosque’s radical preacher, Aboud Rogo Mohammed, was gunned down, and in October last year his successor, Sheikh Ibrahim Ismail, met the same fate on a road near Mombasa, again sparking riots. Most believe the Kenyan authorities were behind the killings.

Last month the mosque was yet again the scene of violence when armed police launched a massive raid to put an end to what officials said was a “jihadist convention” and a Shebab recruitment exercise taking place inside.

Makaburi, who is in his 50s, is currently subject to UN sanctions — a travel ban, assets freeze and targeted arms embargo — for being a “leading facilitator and recruiter of young Kenyan Muslims for violent militant activity in Somalia”, and for having “strong ties with senior Al-Shebab members.”

“I do not support Al-Shebab, I do not know Al-Shebab. I support the implementation of Sharia Law anywhere in the world,” Makaburi insisted in the interview.

He also said that “the highest motivator for the youth to go into Somalia to fight Jihad is the Kenyan government doing injustice to the Muslim youth here in Kenya. How do you think the youth feel after they were sitting peacefully in a mosque and they were invaded, shot at, killed, meant to disappear?”

Instead, Makaburi presents himself as a simple man promoting “true Islam”, and not the kind practiced in Saudi Arabia, which he dismisses as “a Christian country ruled by somebody who pretends to be a Muslim”.

In his view the best examples of Islam are found in parts of Fallujah in Iraq, Taliban-controlled Afghanistan and Shebab-held areas of Somalia.