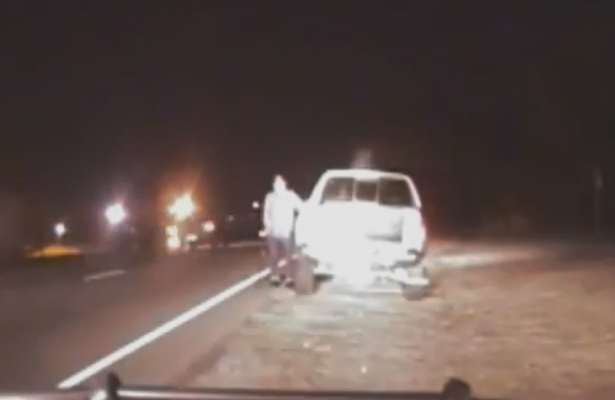 The victim, 70–year-old Bobby Canipe, who is handicapped, was shot by Deputy Knox when he got out of the vehicle and reached into the back of his truck for his cane, which is when Deputy Knox’s uncontrollable fear took over and the Deputy fired not one but several shots at Canipe, hitting him once.

Deputy Knox has since been placed on paid vacation, also known as paid leave, while the South Carolina Law Enforcement Division “investigates” the incident and does whatever it can to blame the victim and eliminate any legitimacy to claims of wrongdoing on the part of the fearless deputy.

Trent Faris, official spokesman of the York County Sheriff’s Office stated that the shooting was unfortunate but “appeared to be appropriate because Knox felt an imminent threat to his life,”according to the Associated Press.

Despite the fact that Canipe was 70 years old, disabled, and was pulled over for a minor (read “ridiculous”) infraction to begin with, many may have wondered if the video would show any remote form of a possible reason to believe that Deputy Knox was justified in opening fire on him.

Thankfully, the video clears this question up quite well.

The viewer is clearly able to see that Canipe is elderly and that he is removing a cane from the bed of his truck. Indeed, the cane is already out of the truck before Knox opens fire.

Of course, the Rock Hill Herald has made the decision not to show the exact moment of the shooting either in an effort to protect the guilty party or simply to censor real life. However, the responsibility for the shooting is still clearly visible despite the viewer being unable to actually see Canipe being struck by Knox’s gunfire.

In a testament to Knox’s police work, Knox can still be heard yelling at Canipe to “drop the gun” even though, after the Herald sees fit to return the footage, Canipe is seen leaning on the cane. Knox’s police experience apparently did not take into consideration that the odds of a gun-owner keeping their weapon in the bed of their truck and then leaning on it (particularly after they tried to shoot a cop) are quite low.

Although, admittedly, Knox did show more regret than many of his colleagues who have shot and even killed innocent people, police officers have taken on a line of work with tremendous responsibility. A simple “Oops” or “I’m sorry” simply doesn’t cut it after you have shot someone in the stomach.

Despite the fact that Knox’s idiocy, paranoia, and uncontrollable fear resulted in an innocent man being shot, the York County Sheriff’s Office is defending his actions and Knox has been placed on paid leave during the course of a SLED investigation.

It is the action and response of the York County Sheriff’s Department, however, that speaks louder than even the insane reaction of the incompetent Deputy. The fact that the YCSD, even after reviewing the video provided above, would even consider suggesting that Knox acted appropriately speaks volumes about the quality and nature of that department.

The people of York County would be wise to reconsider the militaristic, violent, and unaccountable monster they have allowed York County Sheriff’s Department to become before these incidents become daily occurrences in York County.