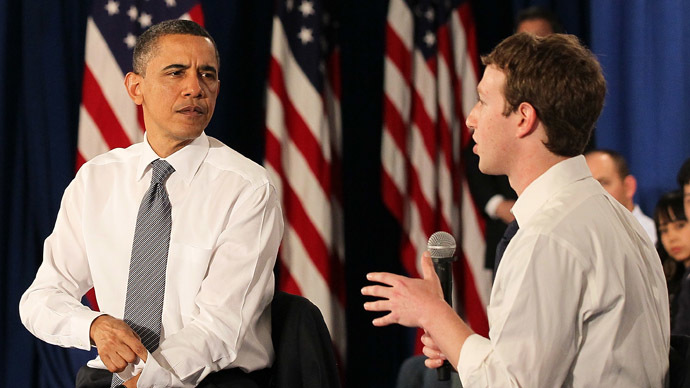 Facebook co-founder Mark Zuckerberg shared harsh words for United States President Barack Obama on Thursday amid ongoing complaints from the tech community about the administration’s role with regards to the internet.

Just one day after newly published National Security Agency documents revealed that the US intelligence community has masqueraded as Facebook in order to carry out attacks against targets, Zuckerberg posted a plea on his social networking site advocating Pres. Obama to be more open about the White House’s role in influencing and encouraging policy changes pertaining to the internet, as well as the government’s covert surveillance tactics that have caused concerns to be raised in recent months about the security of the world’s wired computers.

“As the world becomes more complex and governments everywhere struggle, trust in the internet is more important today than ever,” the 29-year-old Facebook CEO said Thursday afternoon. “The internet is our shared space. It helps us connect. It spreads opportunity. It enables us to learn. It gives us a voice. It makes us stronger and safer together.”

“This is why I’ve been so confused and frustrated by the repeated reports of the behavior of the US government. When our engineers work tirelessly to improve security, we imagine we’re protecting you against criminals, not our own government,” Zuckerberg continued, adding that “The US government should be the champion for the internet, not a threat.”

The government, Zuckerberg said, needs to be “much more transparent about what they’re doing, or otherwise people will believe the worst.”

The Facebook founder’s remarks come in the midst of ongoing reports stemming from leaked national security documents that have disclosed evidence of the US government’s efforts to covertly collect digital intelligence by means that many have said are subverting the very infrastructure of the internet. One of those latest reports, in fact, suggest that the US National Security Agency, or NSA, has adopted plans that put the spy office on track to infecting millions of computers around the globe with malware for the sake of collecting information. As opposed to more targeted operations, however, leaked documents allege that the NSA is making adjustments to keep make this data collection far more systematic, and as a result are infecting machines with a modicum of human oversight. “When they deploy malware on systems,”malware expert Mikko Hypponen told The Intercept for their NSA report this week,“they potentially create new vulnerabilities in these systems, making them more vulnerable for attacks by third parties.”

According to The Intercept, the NSA spoofed Facebook’s computer servers in order to trick users of the social media site into installing malicious programs that were then used to monitor their activity.

“I’ve called President Obama to express my frustration over the damage the government is creating for all of our future,” Zuckerberg said in his statement on Thursday. “Unfortunately, it seems like it will take a very long time for true full reform.”

Just one day earlier, Tim Berners-Lee, one of the “founders of the world wide web,” called for the creation of an internet bill of rights to preserve digital freedoms on the twenty-fifth birthday of the monumental project he was instrumental in creating.

Berneres-Lee told the UK’s Guardian newspaper that “Our rights are being infringed more and more on every side”as governments encroach further on digital liberties, and issued a call “to take the web back into our own hands and define the web we want for the next 25 years.”

“The removal of the explicit link to the US department of commerce is long overdue,” Berners-Lee added. “The US can’t have a global place in the running of something which is so non-national.”