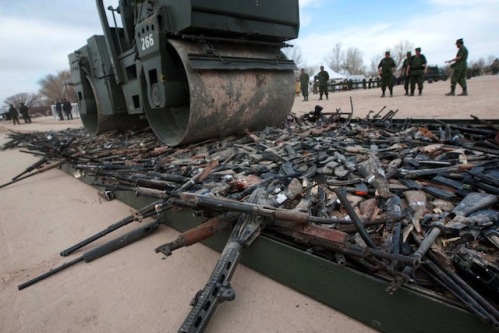 While things continue to escalate in Connecticut as the state has called for gun owners who have not registered their guns to surrender them, just a few states away, new laws in Maryland are doing something similar: Targeting citizens for gun confiscation.

According to the new law, the state’s gun registry would be linked to its criminal database.

State law requires gun owners to surrender their weapons if they’re convicted of felonies or any violent crimes, but Del. Luiz Simmons, D-Montgomery, said Maryland State Police lack a systematic way of enforcing this. They can’t use their databases to identify gun owners convicted of crimes.

State Police estimate that if they linked the databases, they would find 10 percent of registered gun owners — about 110,000 people — would be disqualified. They estimate a rate of 1 percent each year thereafter.

The Department of Legislative Services believes it would cost about $300,000 to create the database. The department also anticipates a need for seven new full-time troopers to investigate findings from the new database, with a cost of more than $1 million a year for salaries and equipment.

You may say that this is good because it targets criminals. While that does seem to be the initial thrust of the legislation, there should be the consideration of gun registration, which government should not be a party to. Paul Joseph Watson makes the following observation:

While the law is ostensibly aimed at disarming criminals, we have seen a steady expansion of reasons that are being applied to bar Americans from owning firearms. The law also creates a chilling effect on the second amendment by implying that gun owners are all guilty until proven innocent.

“This smacks of a police state mentality,” said Maryland resident Ronald Smith in written testimony before a hearing on Tuesday.

Maryland delegate Mike Smigiel spoke to Freedom Outpost about the legislation and says that his greatest fear is that it looks to put an ex post facto law in place. He said, “It appears that the bill would take things that, 20 year ago or 30 years ago, would not be considered to be… associated with having a loss of your Second Amendment rights…then take the current day and say that you had a misdemeanor, a fight in a bar…that you shouldn’t own a firearm. Yet, for the last 20 years you’ve had the ability to purchase and own a gun.”

“The ex post facto application is a real serious concern.” Smiegel said. “We continually attempt to make law abiding citizens into criminals. They want to take away the fact that you can have a PBJ (Probation before judgment), but only if you get it with regards to firearms. They don’t take away your probation before judgment with any other…you could be a murderer, you could be an arsonist, you could be a drug dealer and you still keep your PBJ and you’re not convicted of the crime.”

Delegate Smiegel wants to see two avenues pursued. He would like to see mental health dealt with. In that matter, he wants people to actually get help so that they don’t injure themselves or others whether with a gun or another object. Second, he wants to see those who engage in violent crime with a firearm dealt with severely, not being released back out into society. In this manner, Smiegel says we can deal with criminals completely different than we can law abiding citizens.

Smiegel’s ten-year-old son gets it. After seeing a picture on television of a person, who had been booked for a crime (you know the mug shot with the numbers beneath), his son asked, “Daddy, why didn’t they just keep him in jail when they had him there to take his picture?”

Delegate Smiegel has been on the front lines fighting anti-gun legislation and has remained true to his oath.

I think this is the issue. The solution to problems is not to make criminals out of law abiding citizens. It is rather to enforce the existing laws against those that break them.

At the same time, ex post facto laws are what is creating the stir up in Connecticut regarding the registration of semi-automatic guns and high capacity magazines. During my interviews with Navy veteran John Cinque, this was something he pointed out as well, and part of the reason he told lawmakers that he would not comply with such laws.

The irony in both situations is that Connecticut, “The Constitution State,” and Maryland, “The Free State,” are both targets of the progressive agenda that has only one goal: complete and total gun confiscation.

Connectictut citizens are taking a stand. Will Maryland citizens do the same?