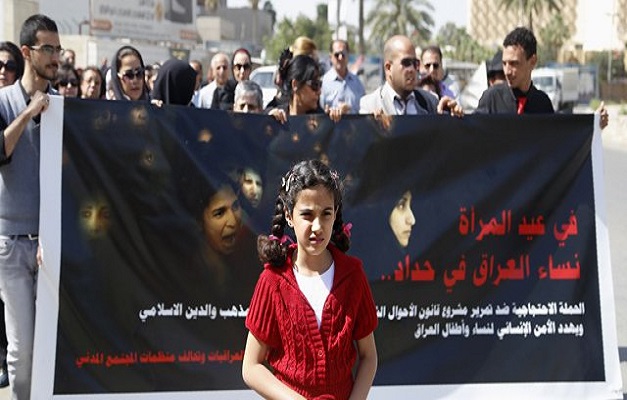 While feminists were busy telling the world about the dire need to ban the word “bossy,” the Iraqi parliament was considering the implementation of a new law that would legalize rape, prohibit women leaving home without the permission of their husband, and legalize marriage for 9-year-olds.

“If passed, the law will apply to Iraq’s Shia Muslims, the majority of the population. Provisions include prohibiting Muslim men from marrying non-Muslim women, legalising rape inside marriage by declaring that a husband has a right to sex regardless of consent, and prohibiting women from leaving the house without their husband’s permission,” reports Breitbart.com.

The law, which has been denounced by Human Rights Watch as a violation of the Convention on the Elimination of All Forms of Discrimination against Women (CEDAW), would also lower the age of marriage to nine years old for girls and 15 for boys.

Despite the fact that the law represents an egregious assault on women’s rights and wouldn’t look out of place in the stone age, you probably didn’t hear about it because self-proclaimed feminists were too busy concentrating on more pressing atrocities being inflicted upon women – such as people using the word “bossy”.

Don’t expect to see slick PSA videos featuring Beyonce decrying a law that would render some 10 million Shia Iraq women as slaves. Don’t expect the mainstream media to afford wall to wall coverage to an issue that could rock the boat of the United States’ puppet government in Baghdad.

Feminists will give this issue exactly the same level of attention they devote to the myriad of other actual attacks on women’s rights – little or none – because establishment-controlled feminism can never risk uniting women around the fact that true oppression always comes from the state.

Once again, the true motivation behind top down feminism is revealed as having nothing to do with genuine women’s right abuses and everything to do with advancing cultural marxism – the false notion that culture and language, not the state, is responsible for oppressing women.

Mainstream feminist groups do not care about real oppression when it emerges from the state or from a religion like Islam, which politically correct leftists are slow to criticize.

Whereas the drive to “ban bossy” is being funded by the likes of Bank of America, Chevron, Citibank and JP Morgan, there are no multi-million dollar campaigns backed by huge transnational corporations, banks and PR firms to combat things like female genital mutilation or the characterization of female drivers in Saudi Arabia as terrorists.

That’s because second wave feminism is not about protecting women’s rights, it’s about stirring up a contrived gender war and impugning western culture, the middle class and the family unit as the source of all sexism and oppression, thereby making women more dependent on the government and hiding the true source of all oppression – the state.