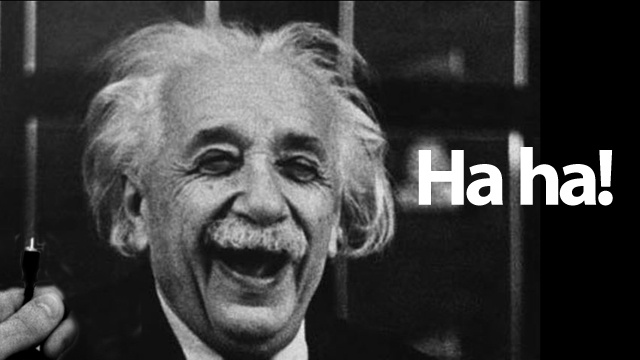 A Iranian cleric is  claiming that the proud Jew and fierce Zionist Albert Einstein was actually a Shi’ite Muslim. And not just any cleric. No sir. This genius is a member of The Assembly of Experts in the Islamic Republic of Iran, no less.

They steal everything else — so why not Einstein? It’s what they do, and while it may seem utterly and completely ridiculous now, so are most of the claims of Islamic invention. But in time and after repeating the big lie enough, it, too, will gain traction, much the way the lies about Jerusalem and Israel have.

Someone email this to the *ahem* esteemed cleric:

“Long before the emergence of Hitler I made the cause of Zionism mine because through it I saw a means of correcting a flagrant wrong.” (Letter to Jawaharlal Nehru, Prime Minister of India, June 13, 1947)

Regarding “the nature of [the] Arab opposition. Though the Arab of Palestine has benefited…economically, he wants exclusive national sovereignty, such as is enjoyed by the Arabs of Saudi Arabia, Iraq, Lebanon and Syria [sic]. It is a legitimate and natural desire, and justice would seem to call for its satisfaction.” But at the end of the first world war, the Allies gave the Arabs 99% of the “vast, underpopulated territories” liberated from the Turks to satisfy their national aspirations and five independent Arab states were established. One percent was reserved for the Jews “in the land of their origin.” “In the august scale of justice, which weighs need against need, there is no doubt as to whose is more heavy.” What the Jews were allotted in the Balfour Declaration “redresses the balance” of justice and history. Brush aside “the rivalries of power politics and the egotism of petty nationalist appetites” and support “the glorious renascence which has begun in Palestine.” (Letter to Jawaharlal Nehru, Prime Minister of India, June 13, 1947)

An Iranian cleric has embraced the Jewish scientist, Albert Einstein, claiming he was actually a Shi’ite Muslim

Iran, which has embraced all things nuclear, has apparently decided to embrace the man who is seen as one of the fathers of nuclear power – the Jewish scientist, Albert Einstein, who was once nominated to be president of the newly-created State of Israel.

However Einstein, according to the Iranians, was no Jew; he was actually a Shi’ite Muslim, a follower of the eighth-century Shi’ite Imam Ja’far Al-Sadiq.

Iranian cleric Ayatolla Mahadavi Kani made the claim in a video that has been circulating in Iran. Kani, who says he is head of a group called Assembly of Experts in the Islamic Republic of Iran, cited documents that claims that Einstein converted to Shi’ite Islam, and that he got the idea for his Theory of Relativity from Islam. The ascension of Mohammed to heaven was “a process which was faster than the speed of light,” and it was from this story that Einstein developed his theory, the cleric said in the video.

According to the ayatollah, “Einstein said, ‘when I heard about the narratives of the prophet Mohammed and that of the Ahle-Beit [prophet’s household] I realized they had understood these things long before us.’”

Iranian clerics have made this claim in the past as well. In 2012, the late Ayatollah Hossein Borujerdi said that he had had a relationship with Einstein, who wrote to him that “Shi’ite Islam was the most scientific and just religion in the world.”

Albert Einstein, the German-Jewish theoretical physicist who developed the theory of relativity, was offered the presidency of the State of Israel in 1952, even though he was not an Israeli citizen.

“I am deeply moved by the offer from our State of Israel [to serve as President], and at once saddened and ashamed that I cannot accept it,” Einstein wrote, citing as a reason his discomfort with diplomatic matters as his main concern, and his age.

“I am the more distressed over these circumstances because my relationship to the Jewish people has become my strongest human bond, ever since I became fully aware of our precarious situation among the nations of the world,” he wrote in a letter turning down the offer. Einstein died three years later, in 1955.

Editor’s Note: Albert Einstein was a Jew by birth. It is reported by many that he rebelled against his faith (not his people but his religious upbringing) and became a non-believer. Accounts are contradicting so I would strongly suggest that you do your own research. Either way, he was definitely not a Muslim as Pamela points out. -Dean Garrison, Editor