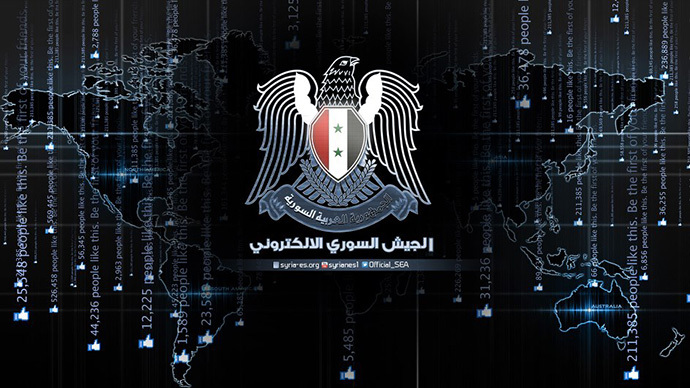 There is no doubt that propaganda flies from every remote corner of the planet these days. We are seeing it daily in regards to Ukraine and Crimea. Russia says one thing and Europe and the United States say something completely different. It is nearly impossible to get to the truth of what is happening. We can not trust American mainstream media any more than foreign propaganda machines.

So when the “Syrian Electronic Army” claims to have hacked into and stolen sensitive files from U.S. Central Command, should we pay attention? Or is it just more propaganda?

I think we have every reason to entertain their claims because of their track record.

In October they hacked Barack Obama’s Twitter account and uploaded a video that showed the horrors of what the Syrian Rebels have been doing to the people of Syria. The video has since been removed (it was hosted on YouTube), but as someone who watched it I can tell you that it was extremely graphic and emotionally charged. They were able to send this video, disguised as an Affordable Care Act message, to 38 million Barack Obama followers. We have no way of knowing how many of those followers actually saw the video.

The Syrian Electronic Army was also able to compromise Marines.com in September of 2013. Below you will see a screenshot.

When RT.com reported yesterday that the Syrian Electronic Army had compromised U.S. Central Command it is not just another propaganda threat that should be taken lightly. RT reports:

A group of computer hackers who are loyal to Syrian President Bashar Al-Assad say they’ve accessed hundreds of documents after allegedly penetrating the network of the United States Central Command and other systems.

The Syrian Electronic Army hacktivist group said from their Twitter account on Friday that they were engaged in an operation targeting CENTCOM due to US President Barack Obama’s “decision to attack Syria with electronic warfare.”

Soon after the group claimed to have “already successfully penetrated many central repositories,” and tweeted a screenshot of what is purported to show that hackers have indeed somehow wound up inside of a military computer system of some sorts.

The image suggests that someone from the SEA may have in fact gained access to a military directory called “AKO Home” that contains a number of folders with names relating to the US Air Force specifics command units under that branch.

“In the coming days we will update you with specific details and hundreds of documents that the #SEA has obtained,” the group tweeted.

This is part of an on-going operation and we have already successfully penetrated many central repositories. #SEA pic.twitter.com/DSUzuFHmkN

“AKO,” or “Army Knowledge Online,” is the name of a web-based enterprise information system used by the Pentagon to let military personnel access files from any internet-connected computer, and was called “the world’s largest intranet” in a 2001 Wired article.

“It’s a total aggregation of all the information the Army has, all the documents, manuals and files,” Ryan Samuel, the director of public relations at a company that helped develop the AKO, told Wired’s Louise Knapp for that article.

At the time, Louise said the AKO had room for around 70 terabytes of storage for those files, though that number has almost certainly grown exponentially over the last 13 years.

The AKO website was slow to respond following the hackers’ claim, which could be the result of a surge in visitors prompted by the SEA’s tweets, an attempted denial-of-service attack to momentarily cripple the military’s servers or, also likely, a total coincidence.

Requests for comment made by RT to the Army’s press office were not immediately returned Friday afternoon.

The SEA has engaged in a number of operations in recent months against the websites of western media outlets, and is perhaps best known for claiming to have compromised the Twitter account of the Associated Press last year. Once that account was commandeered, the SEA erroneously reported that an explosion had occurred at the White House.

In January, the SEA gained unauthorized access to the social media accounts affiliated with Skype and posted messages critical of the Microsoft-owned product and the US government’s relationship with Silicon Valley. Last month, the group reportedly accessed the email accounts of Forbes employees and then took control of associated blogs.

The US has not publically admitted to waging any cyberattacks against the Syrian government, although the White House has been linked to waging a digital attack on Iran’s nuclear enrichment program, and leaked National Security Agency documents have shown that the US intelligence community has an arsenal of offensive cyberweapons at its disposal.

We may soon find out what the Syrian Electronic Army did or did not find.

However, the skeptic in all of us should be asking one question.

Why is Twitter allowing them to continue to operate?

If I would not have seen the Obama posting and video with my own eyes I would dismiss this entire story as harmless propaganda. But the reaction, or lack of, from Twitter is suspicious.

Since Twitter has shown that they will shut down accounts that go against the will of “King” Obama, it really makes one wonder. It’s the kind of thing that the most intricate conspiracy theories are made of.

What do you think? Is the Syrian Electronic Army being run by our own government?

Again, the video they uploaded via the Obama account makes me have serious doubts, because it could have been very damaging, but why has Twitter not silenced them? I am not saying that Twitter can stop the Syrian Electronic Army from hacking systems but why are they providing a mouthpiece?

Something is not right.