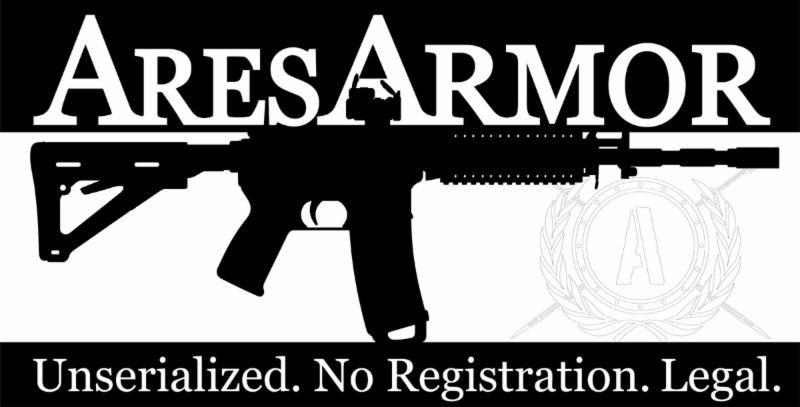 Less than a month ago Ares Armor was threatened over a sign (below). Things have escalated considerably since that time.

This is one of those stories that leaves one with that sick and sinking feeling. If it has not already been made clear, the federal government just sent another message to gun owners. They will get our information, and eventually confiscate our guns, by whatever means necessary. If that means ignoring a restraining order or violating 4th amendment rights, they are not above doing that.

On Saturday the Bureau of Alcohol, Tobacco, Firearms and Explosives raided Ares Armor in an effort to obtain customer lists that were protected by a restraining order. Ares Armor manufactures components such as the lowers that people use to build their own AR-15. It has always been perfectly legal to do so. The ATF wanted the customer database in spite of this. Ares did everything they could to protect this list. They did however agree to turn over components to the ATF. That was not enough. The ATF was not going to be satisfied without a list of gun owners. On Saturday they executed a raid to get that list.

When Bureau of Alcohol, Tobacco, Firearms and Explosives agents expressed interest in a Southern California gun part and accessory store, it sought the protection of a federal district court. But on Saturday, agents raided the store anyway.

Ares Armor sells what are called “80% lower receivers” to allow a buyer to make his own AR-15 rifle. According to federal law,”The term ‘firearm’” includes “the frame or receiver of” a weapon, but one that is only 80 percent complete does not fall under that category.

When ATF agents began nosing around Ares Armor and started asking questions, the store obtained a temporary restraining order prohibiting the agency from seizing its product line and customer list. A hearing was scheduled for March 20 to litigate the issue.

However, on Saturday, ATF agents raided Ares pursuant to an ex parte order — an order obtained without notice to the other party, in this case Ares — and did just what Ares feared, according to the amateur video below.

Weasel Zippers provides this analysis on how the ATF may have skirted the TRO (Temporary Restraining Order) that was issued Wednesday:

It appears that despite the judge granting the TRO on Wednesday, yesterday the ATF went to the judge ex parte (meaning without the other side, in this case Ares, being present), and got a “clarification” of the prior TRO. This “clarification” seems to give them the green light to apply for a “lawful search”.

IMHO, in order to have a change between Wednesday when the original TRO was granted, the ATF would have had to have alleged Ares was about to get rid of records and that they, the ATF had emergent reasons for going in now rather than waiting till the full hearing that was scheduled for March 20.

FoxNews reported earlier this week on the great lengths that Ares management had gone through to try to prevent this from happening:

The owner of a California store that sells gun parts to build rifles from scratch is refusing to turn over his customer list to federal officials.

Dimitrios Karras, owner of Ares Armor in Oceanside, told Fox5SanDiego.com that Bureau of Alcohol, Tobacco, Firearms and Explosives agents are investigating his business because it sells AR-15 lower receivers, which contain the gun’s operating parts.

“They said either give us these 5,000 names or we are coming in and taking pretty much anything – which is a huge privacy concern and something we are not willing to do,” Karras told the station.

Karras’s attorney arranged for ATF agents to pick up the receivers on Wednesday, but Karras said he will not comply with turning over the customer list.

Anticipating a possible raid, the company filed a temporary restraining order against the ATF in an effort to prevent them stopping them from confiscating their property, Karras told the station.

Is this the way our laws are meant to be enforced?

The ATF could not wait 5 days for the hearing?

What has happened to the Constitution and Bill of Rights?

This was an obvious case of unlawful search and seizure in my opinion.

VigilantSpectre Operations sums it up better than I could with this YouTube video:

Yes America, it’s true. They are trying to take your guns and they will stop at nothing to do so. If you have an AR-15 which you assembled with an Ares Armor lower, I would suggest that you prepare for a letter or visit.