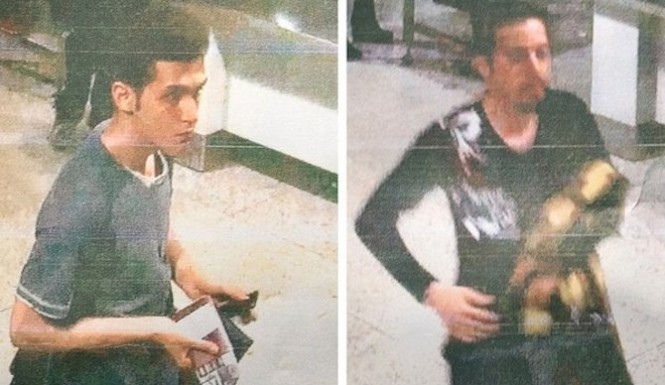 Movements that “are consistent with deliberate action by someone on the plane.”
Malaysian Prime Minister Najib Razak

Two so-called ‘innocent’ Iranians fly to Malaysia but NOT from Iran. They go from Tehran to Qatar where they purchase two passports that were stolen in Thailand, bought through a Thai travel agent and an Iranian middleman, that takes them to Malaysia to get a flight to Beijing then on to Amsterdam with the final destination being Germany. Two passports…one an Italian passport used by Delavar Seyed Mohammadreza, 29…the other an Austrian passport used by Pouria Nour Mohammad Mehrdad, 18…who then fly from Qatar to Kuala Lumpur, where they board Malaysia Airlines Flight 370. And why Germany…the younger Iranian ‘supposedly’ has a mother in Germany who claims her son was on his way to Germany to seek asylum…guess the new route to European asylum is through China. But the question is why NOT travel a direct route from Iran to Germany with a valid passport which can easily be booked online for about $1000 instead of dealing with stolen passports?

Why indeed even as Interpol Chief Ronald Noble said it’s believed the two are NOTHING but illegal immigrants who went through Kuala Lumpur to reach Europe, and are“probably not terrorists.”

Probably nots do NOT cut it in today’s post 9/11 world…period.

And NO mention has been made or attention focused on the Chinese Uighur muslim man with flight simulation training…flight simulation training just like some of the hijackers of 9/11 infamy had. Instead attention is being focused on the pilot and co-pilot as the plane’s disappearance has now been ruled by Malaysian government officials to be a deliberate, criminal act, and NO accident.

But with NO reports or evidence linking either the pilot or the co-pilot to any wrongdoing, isn’t it odd that time is being wasted on this wild goose chase for why NOT stay focused on the two Iranians and the Chinese Uighur muslim? I’ll tell you why…first, as to the Iranians, any attention focused on Iran could jeopardize the kumbaya warm fuzzies the Obama administration is embracing after the Geneva Accords to help paint Iran as a nation wanting to join the world community by stopping their quest for nuclear weapons. And we know that has as much truth to it as all Obama’s birth certificates combined do. Second, China has become a world player in the trade markets…in the jobs market…in the money lending market…and we and other nations are so much in debt to them that we cannot afford to point fingers at them as they have us and the others under its promissory ‘note due’ thumb.

But these are the very nations that need to be under scrutiny as isn’t it odd that now the search perimeter has been expanded all the way to the so-called ‘stan countries’ including Pakistan and to Iran as well. A search perimeter that encompasses large areas of the muslim world…as in most of the countries that support or gave birth to terrorism. And with terror analysts saying that Malaysia is home to people who are operatives of militant islamic groups, isn’t it odd that Malaysia (to date) has NOT been targeted in any terror attacks. But China has indeed been facing problems with its muslim population in its far west regions… muslims who complain to any and all who will listen about their perceived Chinese repression of their religious rights. And tying these two countries together is the fact that since 2011, Malaysia has deported at least 17 muslims…probably more…who were using fake passports to travel back and forth to China.

And what of the plane itself…based on pings to satellites and unconfirmed reports of radar hits, the plane apparently flew between known flight paths on its way to Europe or the Middle East. This seems to hold true based on a 2:15 am report of a radar hit of a plane to the west instead of north of Malaysia over the strait. The plane was unidentified, but with all other planes accounted for what else but Flight 370 could this be? And if this was indeed the plane it would have to come down eventually somewhere…but where?

The first scenario as to where sends chills up one’s spine. Fact…this jet needs 3,600 feet to land and many airports in both friendly and unfriendly countries have runways of this length, but 5000+ feet is needed for takeoff. If this plane was hijacked, as most experts and Malaysian government officials now agree that it has been, it obviously was done for some very nefarious purpose…and with Iranians on board it must be remembered that there is NOTHING more nefarious than Iran’s plans for Israel. So did this jet after being secured by hijackers land in and be welcomed by some terror supporting country for retrofitted with a WMD to be dropped over Israel? Could be, but if so searchers need to focus their attention on airports that have suddenly added length to their takeoff runways.

The second scenario is that even if the plane was indeed hijacked that does NOT mean it made it to its intended destination…therefore it could have gone down over water. And over water there is very little radar coverage, meaning if the plane was flying at a low level with radars NOT being able to see over the horizon beyond 25 miles, and with NO one searching flying the sort of airborne AWACS radar planes that could spot low flying targets, the plane could very well fly unnoticed until it crashed, again unnoticed, into the sea.

So Flight 370 either crashed into the water, crashed somewhere on land, or landed someplace nobody suspects or is looking for as mentioned above.

And while some say that if this was hijacking of the terrorist kind why hasn’t credit been taken? That is quite simple to answer… terrorists… jihadis…take claim only after a successful event has occurred NOT before and NEVER while an act is in progress.

So as the mystery of Malaysian Flight 370 continues unanswered I still say let’s look at the possibility…as per LOST…that a time continuum was crossed over as right now that is as good a possibility as anything else we have.