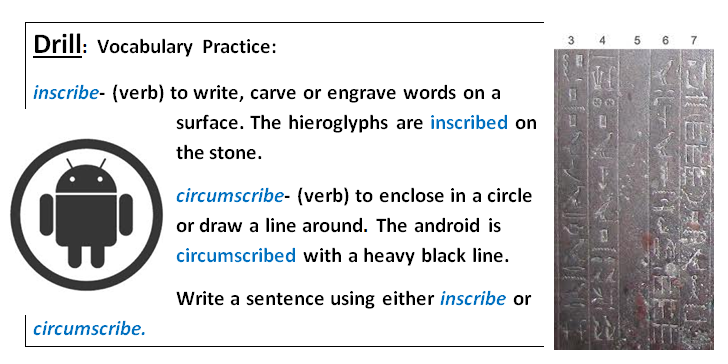 The following narrative is just one rather typical day in the life of an urban high school teacher. It starts with the drill below, a carefully planned lead-in to a lesson to improve student study skills, and goes downhill from there.

Reasoning for the Activity: This activity increases study skills, helps students retain information, and appeals to multiple learning styles. Though it is a simple assignment on the surface, it requires applying understanding of the vocabulary words to a new form. It forces the student to think about the meaning of the word beyond just memorizing a definition and then to synthesize that meaning into a visual image. Though about 25% of my students are doing fine on vocabulary quizzes, the rest are scoring below 50% on average. Hopefully, this is one method to help more students score at least 75% or more.

Prior to the Lesson: These words had been introduced to the students at the beginning of the week in a list of 10 vocabulary words. They were assigned nightly practice with all 10 words. Each night’s exercise should take no more than 10 minutes. Vocabulary words and activities are assigned weekly.

One Class Period: Since this particular school day was a half day and only around 50% of the students would likely attend, I made a large table of the desks in the center of the room so that students would be together rather than scattered around a half empty room. I planned this lighthearted though still meaningful lesson since I would only see half of my class periods.

Right from the start of class, several students would not follow the simple direction of sitting at the center table. After reminding them that they needed to sit where I instructed, all but one student eventually complied. This one student refused, sucked his teeth at me, and chose instead to walk out of the room with a flip of his head. Nothing will happen to him; there will be no consequence. Besides, he has an IEP, so he thinks he won’t fail the class though he does little work.

Ten minutes into class, less than half the students bothered completing the daily drill. Drills are marked for completing in time, not correctness, so submitting them is an automatic easy 2 points. I based the drill shown above as a lead-in to the assignment. This should be the fifth time the students have worked with the two drill words IF they had been completing the homework exercises.

As I was presenting the drills that were submitted, giving directions for the day’s class assignment, and explaining how the activity could help students improve their quiz scores, I had to stop multiple times to wait for more than half the class to stop talking and pay attention. The entire process of drill review, introduction to the lesson, examples, and assignment directions should have taken no more than 10-12 minutes, hardly an over taxing attention span for ninth graders. Instead it took over 22 minutes to deliver.

Although I went over instructions, projected the directions and the word list at the front of the room, provided two examples of illustrated vocabulary words with sentences from one of the previous word lists we studied, and reminded the students that they had the definitions along with dictionaries in the corner, half the students asked, “What are we doing?” or “What words?” or “I don’t know the definitions,” because they had paid no attention to the simple directions, the examples, or the word list. They do not believe that they have to. They do not believe that they will fail no matter what they fail to do. Many of them had not completed the homework all week either.

Little will happen to them either, although I do think that the Behavior Specialist sent her home early. Big deal. It was already a half day and her parent probably will think she did the right thing. The same nothing happened yesterday to the unruly boy who refused to go to the office after being disrespectful and completely disruptive, as he is most days, who, when the school policeman escorted him out, called me an “effing B”.Once the students had been released to start working, a student walked in late trailed by her buddy. They did not sit at the table, so I directed them to a seat. At first, they also refused to sit there, but eventually conceded. Another student explained the assignment to the first girl, but she sat there doing nothing. I was helping at the other end of the table at first, but when I got down to her, she was still doing nothing. I asked her why she was doing nothing and she said, “I don’t have paper.” I pointed out that there was paper in the center of the table. Her response was, “You expect me to get up and go down there to get it?” with an accompanying sneer. I mock bowed and said, “No, instead you expect me to be your servant and fetch it for you. Get up and get some paper for yourself.” She got up and stomped out of the room because I had “disrespected” her; her buddy followed behind her.

The B-word was used by another student today who, upon returning from the lavatory, walked by one young man and threw the word at him because he didn’t jump up to open the classroom door quickly enough. I have to keep the door locked on the outside or other students will wander in willy-nilly all day. I became aware of the situation when I saw one student shove the other as hard as possible. I got between them and managed to talk one out of the room and into the hall. I called our Behavior Specialist who came to deal with them. The student who did the shoving sneered in my face and said that I couldn’t have seen him shove anyone, though he did finally own up to it with no apologies for his behavior or to me. Off those two went down the hall to the office. In the meantime, my students lost ten minutes of my attention and had to be brought back on task again.

Finally, class ended; students rushed out; chairs were left scattered; papers on the floor; a few students stopped to wish me a good weekend and I returned the wish. Thus ends another class and I wait for the next to begin.

This is the norm in my school.

Oh, and though we are having a half day in order to accommodate parent/teacher conferences, the administration sent out an email this morning stating that, since we have such a “low parent turnout,” a workshop would be offered on “Restorative Practices” instead. No explanation was given for how to know whether a parent did arrive, so I stayed in my room just in case. I may get a reprimand for that.

Here is the sad thing. Urban parents at certain schools are indeed less likely to attend a parent/teacher conference; that is true. It is especially true when you do not TELL parents about them. There may have been a robocall sent out, but to my knowledge no other communication has been sent to parents. There is no published school calendar. Heck, I was not even sure that this afternoon was for parent/teacher conferences until yesterday. As to the robocalls, less than a quarter of the contact numbers listed in the SMS system, which is the numbers the robocall system uses, are accurate. Therefore, I most likely will see no parents today even though 70% of the ninth graders are failing most of their classes (and none came). One would think that the administration would be doing everything that they could to drag EVERY parent in here; their failure to do so shows how little the school’s administration cares about what happens to these students.

Additionally, administration handed me the progress reports to distribute to the ninth graders, since I teach most of the ninth graders. I received the reports in the middle of my first period class. They were not alphabetically organized or organized by class period. A third of the reports were missing, and a tenth of the reports were for students in other grade levels. I had to flip through them to try to find the reports for those students currently in the class period, again drawing my attention away from the students. As I passed out the reports I observed that most of the students had a majority of Fs in most classes. At least this quarter, there are progress reports; last quarter none were distributed, unless the parent came to school to request one.

This is also the norm for my school.

A colleague of mine asked me just today if I was angry at the children or angry at the colleagues and administrators who had these children before me. It is hard not to be frustrated with the children who daily make teaching a struggle, but I hold accountable the adults who accept failure from these students year after year in the name of misplaced compassion and the lie of social justice. The nation is failing our children all the while pretending that the children are the first concern.

The real problems in our schools include poor school attendance, terrible attitudes, no accountability of students, parents, or administration (just teachers), and the cultural acceptance of Explain and Blame; Accuse and Excuse©. Until we as a nation actually face the serious problems in our schools all of the CCSS standards, no matter how good or bad, mean NOTHING! An analogy I like to use is as follows. Many folks are excited about planning community recycling programs, and there is nothing wrong with a community recycling program, but the Visigoths are tearing down the walls of ROME!!! Civilization itself is at stake. Community recycling programs must be put aside and the danger at the walls addressed before there is no community left to save.

The nation wants MY salary to suffer for this! I should get hazard pay. I am one of the few and the brave minding the walls while the academics and politicians are recycling ridiculous so-called standards in a new package.

Dana R. Casey is a veteran high school English teacher of more than two decades in an East-coast urban system. She is a life-long student of theology, philosophy, and politics, dedicated to the true Liberalism of the Enlightenment, as defined by our Founders and enshrined in our Declaration of Independence, Constitution and Bill of Rights.