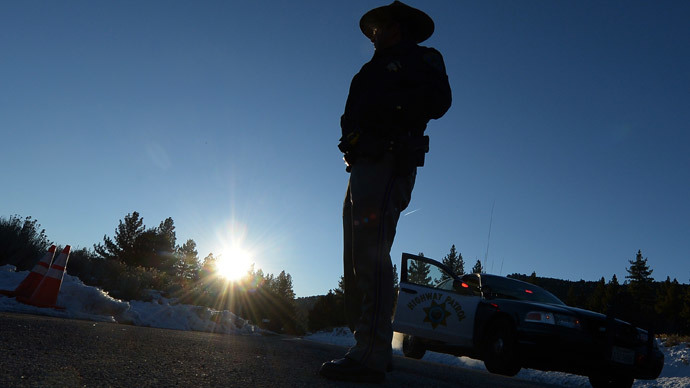 Michael Davidson, a 20-year-old Airman first class, was driving to North Carolina for his assignment at the Seymour Johnson Air Force Base on March 6 when he was shot by a police officer.

His father Billy says Michael got into a minor accident with a truck and both drivers pulled over near Exit 62 on I-85. He described the incident to WSFA:

“I assume the police saw it and pulled, and Michael said he heard screaming or hollering and he saw the lights. He realized it was a police vehicle and he raised up his hand. He had his bill fold at the time he was turning around saying ‘I am an Airmen headed to my…’ and that is as far as he got. As he turned around he felt something hit him and he had been shot,” Billy said.

Billy spoke with WTVM about his son and what he knows about the shooting so far:

Opelika Officer Phillip Hancock has been identified as the cop who shot Michael. He’s been placed on administrative leave pending an investigation by the ABI.

As of now, the police department and the Alabama Bureau of Investigation have not provided much information to the public, but said an investigation will be conducted.

“Based on the facts and circumstances I’m aware of, Officer Hancock acted accordingly, within departmental guidelines, and we fully support him.”

But, McEachern then made a comment that is quite revealing. He said he would “only speculating at this point” as to what perceived threat led Hancock to shoot Michael, and was sure to point out that the investigation would take awhile:

By the way, it took investigators 16 hours to notify Michael’s family that he’d been shot. McEachern admitted that a faster response “would have been preferable.”

WTVM reports that the police confiscated what appears to be synthetic marijuana from Michael’s car:

Five empty packets were found as well as one open packet that had the potential spice still inside of it. A test needs to be performed before the substance is confirmed to be a drug.

In June 2012, Gov. Bentley signed a law classifying spice as a schedule I drug. Anyone caught selling or possessing spice can be charged with a felony.

Davidson’s family claim Michael was not under the influence of any drugs when he had the incident with the officer. It could take months before the results of a toxicology test come back to determine if drugs were in Davidson’s system.

Michael’s father said his son is a good kid who was serious about his career:

Billy said Michael has never been in any major trouble or served time in jail. His father says there were no drugs, alcohol, or weapons in the car because they would end the Air Force career Michael took very seriously. Michael dreamed of entering the Air Force Academy, but his father worries that is no longer attainable because of his injuries.

So far, no charges are pending against Michael.

Michael’s family would like to see the dash cam video of the shooting. WSFA filed a freedom of information request to obtain a copy.

The bullet injured Michael’s intestines and bowels, and he may have to live with a colostomy bag for the rest of his life.