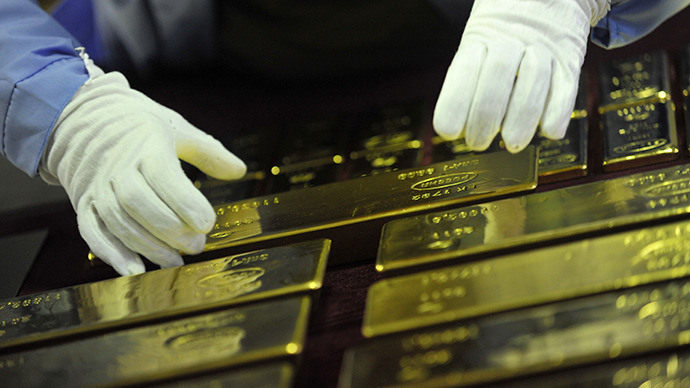 Why was Ukraine’s gold flown from the country and deposited in the New York Federal Reserve? Why hasn’t the US media so much as dealt with the formal allegation by Iskra News that this event took place on March 7, 2014?

According to Iskra News: “At 2 a.m. this morning [March 7] an unmarked transport plane was on the runway at Borispol Airport [Ed. Note: East of Kiev]. According to airport staff, before the plane came to the airport, four trucks and two Volkswagen minibuses arrived, all the truck license plates missing. Fifteen people in black uniforms, masks, and body armor stepped out, some armed with machine guns. They loaded the plane with more than 40 heavy boxes. After that a mysterious man arrived and entered the plane. All loading was done in a hurry. The plane took off on an emergency basis. Those who saw this mysterious special operation immediately notified the airport officials, who told the callers not to meddle in other people’s affairs.”

John McCain (R-Hell) issued a statement, through his office which essentially calls for World War III. The message chastises Obama for his refusal to honor a request by the Western banking coup-installed prime minister of Ukraine, Arseniy “Yats” Yatsenyuk for arms, ammunition, boots on the ground as well as intelligence support.

In his statement, McCain stated: “The United States should not be imposing an arms embargo on a victim of aggression. Putin’s Russia has invaded Ukraine and is planning to annex Crimea. Russian forces are massing on Ukraine’s border, raising concerns of a widening military intervention. Now is the time to show the Ukrainian government and people that the United States stands with them in their hour of greatest need”.

Previously, McCain has called for reinstituting the draft in case of World War III. This is a concerning and an ominous statement. What does McCain know that the average parent of an 18 year old boy does not know? Please allow me to digress for a moment and urge America to not submit to a military draft in order to fight a “bankers war”, should these events come to fruition.

In a previous article, I stated that the World War III would commence in Syria, not in Ukraine. The Russians will soon invade Ukraine and McCain has publicly lamented the fact that there is not a real military option to protect Ukraine. Yet, this warmonger is calling for military intervention in Syria, exactly as I had predicted.

The window for the United States to save the Petrodollar from the scourge of the Iranian sale of oil for gold to the BRIC nations (e.g. Russia, China, India) is rapidly closing. If the Russians are able to invade Ukraine and consolidate their holdings, an invasion of Syria as a precursor to the invasion of Iran, can be seriously challenged by the Russians operating out of Crimea.

This would certainly open the window for a false flag event to take place in which Assad and the Syrian government are blamed and this will be used as an excuse for invading Syria. McCain has already been making pre-emptive remarks with regard to invading Syria in lieu of opposing the soon-to-be invasion of Ukraine.

US Martial Law Is Close

For the past 18 months, I have been quite clear on one point. The establishment of martial law in the United States will precede any global conflict. The people and the resources of the United States must be secured and its people must be controlled prior to the roll out of the draft and total warfare.

The looting of the gold from Ukraine by the New York Fed and the State Department serves a number of purposes. First, when Ukraine is invaded, the backers of the Petrodollar do not want to see Russia obtain any more gold from which to purchase Iranian oil. Secondly, the seizure of Gold represents an insurance policy to the Federal Reserve. I believe this move signals the intention of a coming currency collapse inside of the United States and gold will be the safety hedge against any such occurrence.

Please allow me to spell this out more clearly. What would be the ultimate hedge against the collapse of the dollar? There is no question that the possession of gold reserves would represent the only real medium of exchange during and following a currency collapse.

This latest round of gold confiscation is not the first time we have seen the bankers acquire gold. Back in April of 2013, I wrote these words:

“Silver prices have dropped dramatically this past Monday. Panic selling dominated the market as investors and financial institutions could not dump their holdings of silver and gold fast enough. The market clearly shows signs of mass manipulation by the Globalists.  The best proof that the globalists are manipulating the price ofgold comes from “Goldman Sachs (who) reportedly told their clients earlier this month that they recommend initiating a short COMEX gold position.

The banksters have been engaged in a wholesale and long-standing effort to obtain massive amounts of gold as fast as possible and this acquisition has been taking place for at least a year.

On March 10, 2014, Republic Broadcasting talk show host and former Green Beret/military intelligence officer, along with Bob Gaston, called for an economic collapse by April 11, 2014. The cause of the coming collapse is tied to Putin’s plans to totally dump the dollar. This would wreak havoc on the Stock Market and could definitely lead to an economic collapse. Isn’t it coincidental that Tom Clancy’s last work, Jack Ryan Shadow Recruit, was based upon a Russian attack upon the Stock Market. Clancy is now dead and he died under mysterious circumstances.

Adding conspiratorial fuel to this fire is tied to the fact that it has been a well-established fact that “Yats” is the manifestation of the Western banking plot to overthrow the Russian friendly Ukrainian government and replace that government with a Western banker. There can be no question that Yats cooperated with the looting of Ukrainian gold which is most likely tied to the fact as to why he was installed as the leader of Ukraine.

The gold reserves are in place, the conditions are ripe for a stock market collapse. Surely, there will be unrest in the streets as Americans lose everything and martial law will be declared. With martial law in place, the path will be clear and World War III will be coming into plain view.

I do not have to close my eyes to imagine that McCain could be the leader which could lead us into WW III by commencing military action. I am not predicting, but I would not be shocked if the impotent Obama were to be deposed and removed from office based upon any number of previous transgressions (e.g. Fast and Furious, Benghazi, etc.). My vote would be for Benghazi, because this event could virtually take down the entire Executive branch of the government. This would pave the way for the installation of McCain as a “provisional” leader as a result of a soft military coup because the possible line of succession could be destroyed with mass arrests and impeachments. If this sounds so far-fetched, then ask yourself why the warmongering Senator sounds far more presidential than the illegal alien occupying the White House.

There is one thing that we can be certain about, a currency collapse is in the near future and so is martial law followed by World War III.