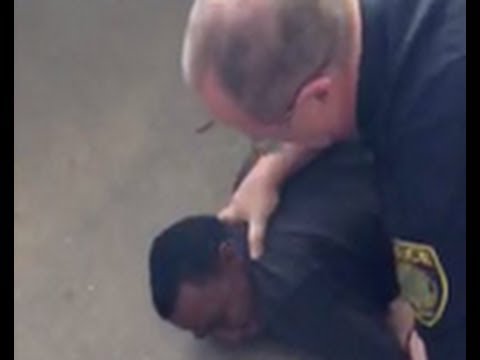 Shocking video has emerged of a campus police officer violently breaking a student’s arm as he screams out in agony during an incident at West Brook High School in Beaumont, Texas.

Footage of the incident shows squabbles breaking out before a female officer grabs a male student and hauls him to the ground, aided by Officer Steve Rivers.

As the female officer presses the student’s face to the ground, Rivers grabs his left arm and violently bends it backwards in what appears to be a deliberate attempt to snap the bone. A sickening crunch is audible as the student screams out in agony. Although the kid is clearly in severe trauma, Rivers continues to push his head to the floor.

Following an investigation of the incident, which occurred on March 7, Officer Rivers was placed on administrative leave without pay.

Despite the fact that the incident clearly represents one of the most sickening examples of police brutality in recent years, numerous respondents to a 12NewsNow story said that the student deserved to have his arm broken because he did not immediately comply with the officer’s demands.

“The young man was refusing to comply with the officer, and once again we don’t see what happened to cause the officer to subdue him. Officer says “don’t move”, you don’t move. Don’t condemn unless you know the whole story,” wrote Martin Scott.

Other commenters responded by pointing out that the student was already subdued on the floor before the cop broke his arm.

“That kid made a choice not to obey a police officer. Which means he will never obey in the “real” world. He got punished,” remarked Cody Wilson.

Joel Scott, a professional MMA fighter, said that the cop’s actions suggest he intentionally tried to break the student’s arm.

“I am a professional cage fighter. I have trained in Jiu Jitsu for 3yrs [which] is a form of martial arts that specializes in submissions and breaking bones. It takes a lot of force to break a human bone. You can clearly see that was intentional. He used his weight as leverage. The average person knows the [range] of motion of the human arm and he knew what he was doing,” wrote Scott.