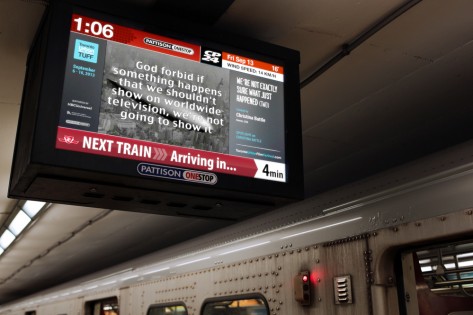 Yesterday, March 18th, the ReThink911 group launched a new ad campaign that is showcased within the Toronto subway system (TTC.) This campaign will be running for 2 weeks and approximately 1.2 million residents of Toronto will see video footage of the collapse of World Trade Center 7 compared to a controlled demolition with the caption “ReThink911.org.” It is estimated that people who ride the subway on a daily basis will see the ad an average of 5 times during the two-week campaign period.

The decision to bring this information to the screens and actually show people the collapse of Building 7 was inspired by a scientific poll that was done by the campaign. The poll found that 51% of Canadians who are shown video footage of the collapse of Building 7 suspect that it was a controlled demolition, compared to 18% who suspect it was caused by fires.(1) When the people were asked who they were more inclined to believe – the U.S. government which still states that the building was brought down by fires, or the critics such as Architects and Engineers For 9/11 Truth who argue that it was a controlled demolition, 49% agree with the critics, while only 20% believe the official story from the government. 44% are in support of reopening the investigation while only 14% are opposed.

“The poll shows quite clearly what we already knew. Most people who see Building 7’s collapse have trouble believing that fires brought it down,” said Mr. Gage. “It simply doesn’t look like a natural building collapse, and that’s because all the columns have been removed at once to allow it to come down symmetrically in free-fall. When everyone in Canada and everyone in the U.S. sees this footage, there will be widespread outcry for a new investigation.”

Aside from this ad campaign in Toronto the people behind ReThink 9/11 have had several campaigns running all over North America including Vancouver, Chicago, Los Angeles, San Francisco, New York, Dallas and even London, England. How amazing is this? Who would have thought that this information would become so mainstream and be exposed to so many different people? This is so important because the first step to creating real change on this planet is by creating awareness, and these campaigns are doing just that!

I don’t know about you, but for me, learning the truth behind 9/11 was one of the biggest turning points of my life and it was the single most important realization that kick started my awakening and brought me to where I am now.

If people continue to learn the truth about this amazing event in history and realize that the U.S. government was in fact capable of lying to its own people about this, then naturally people will begin to wonder, what else are they lying to us about?

Hi, I’m Alanna! I have been a contributor with Collective Evolution, where this first appeared, for about 4 years now, but have been “awakening” and doing research for 7. Wow, has it been an incredible journey so far! I am passionate about learning new information! I aim to have a voice for animals and animal rights, I also enjoy writing about health, consciousness and I am very interested in psychedelics for healing purposes! Any questions? Feel free to email me: [email protected] “If we could see the miracle of a single flower clearly, our whole life would change.” -Jack Kornfield