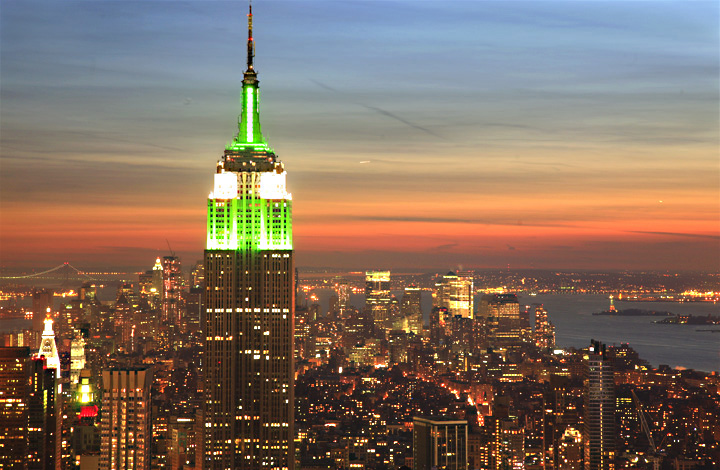 This is the template for imposing Islam on the public square (or a top ten target of jihadists). This public prayer on the Observation Deck of the Empire State building was a provocation. It had nothing to do with piety or religiosity. It is political and supremacist. Were they facing Mecca or Ground Zero?

You don’t see this in Muslim countries. They can make up a prayer at any time. They go to the mosque or stay at home to pray. There are no prayer breaks in Iran and Dubai at workplaces. No prayers on the streets. It is a direct act of defiance against the host culture. It is a prelude to conquest according to Islamic texts. They always prayed in front of their enemy’s gates before they invaded. Liberals do not get it. They think this is an exercise in religion when it is not. It is a call to conflict: “Fitna.” If Empire loses this suit (and it may if Holder gets involved and he always does in these matters), they will pray there in dozens or even hundreds in the future, scaring away other visitors. (thanks to Armaros)

I describe this well-worn but successful tactic by these supremacist colonizers in my book, Stop Islamization of America, A Practical Guide to the Resistance.

Photo: The Empire State Building in New York is lit up in green to mark the Islamic festival of Eid. Proving yet again, the more you submit, the more is demanded. Green for EID but the  owners refused to light it for Mother Theresa’s 100th birthday.

A Muslim family from Long Island slapped the owners of the Empire State Building Tuesday with a scathing $5 million lawsuit that claims they were booted from the building’s observation deck for praying.

Fahad and Amina Tirmizi of Farmingville said their civil rights were violated when they were “assaulted, battered and forcibly removed” from the famed observatory last July.

The suit, filed against Malkin Properties, security company Andrews International Inc. and others, claims that Fahad, 32, and his 30-year-old wife were unfairly targeted because they were Muslim and wearing traditional Muslim attire.

“We weren’t doing anything wrong,” Fahad said. “We just wanted to enjoy the view like everyone else.”

The couple and their two children were on the 86th-floor outside deck when they walked over to a quiet spot to recite evening prayers, the suit says.

Although Amina briefly prayed without incident, a security guard quickly confronted Fahad and “menacingly poked” him and loudly told him he was not allowed to pray on the deck.

Another guard joined the fray and told all the family members that they had to leave, and “forcibly escorted” them down to the lobby and out of the of the building, the suit says.

Fahad told The Post that he has prayed in public before and tries to be respectful.

“Earlier that same day at the Staten Island Ferry terminal, I needed to pray the afternoon prayer and wanted to make sure I’m not in the way,” ­he said.

“I confirmed with a police officer who was standing right there to make sure it was a good spot. The officer responded, ‘Go for it, it’s not illegal to pray.’ ”

“To most, the Empire State Building is one of the great landmarks of this city, but for my client and his family, it is a building of ignorance and injustice,” Hines said.

“A family trip to enjoy the cityscape was cut short after security officials threw them out of the building for exercising their religious beliefs.”

Representatives for Malkin Properties did not immediately return messages.