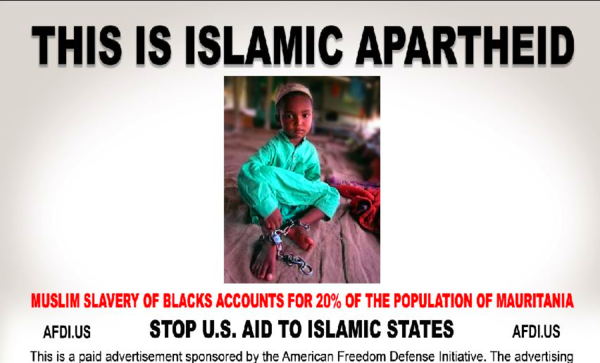 Here again, another case of Muslim slavery in America.

We are seeing a spike in such human rights crimes as Muslim immigration soars under Obama. And it’s always privileged, elite Muslims: in this case the slave owners were former Moroccan diplomats. A couple of months back it was Saudi “aristocracy.” No one ever saw the enslaved victim for years. The only sighting was a woman in a burka or a veil. More sinister use of the misogynist (but devout!) garment.

Slavery is very much alive in the Muslim world. 20% of Mauritania’s black population is enslaved by Muslims. “Islamic apologists in the West routinely claim that Islam forbids slavery, but in fact the Qur’an takes slavery for granted, and according to Islamic tradition, Muhammad hallowed the practice by owning slaves himself,” according to Robert Spencer.

Considering Hollywood’s obsession with slavery movies (how many slave movies do they produce each year?), why haven’t they made one film about slavery in the Muslim world, where it continues to thrive? The horror is happening now, but they fetishize about slavery horrors long past. It reminds me of Europe’s obsession with the holocaust, fetishizing over memorials for dead Jews while sanctioning the new rise in Islamic antisemitism in their countries. So hostile has Europe become for their Jews, they are fleeing en masse.
[youtube]http://youtu.be/6JNOKVoUorg[/youtube]

The Department of Justice announced today that a federal criminal complaint has been filed in the Eastern District of Virginia charging defendants Abdelkader and Hnia Amal with immigration offenses in connection with allegations that they held a woman in their home as a domestic servant for three years. The defendants were each charged with one count of alien harboring for commercial advantage and private financial gain.

If convicted, Abdelkader and Hnia Amal could face a statutory maximum sentence of 10 years in prison and a $250,000 fine. A complaint is merely an accusation, and the defendants are presumed innocent unless proven guilty.

The names have changed but it’s still slavery.