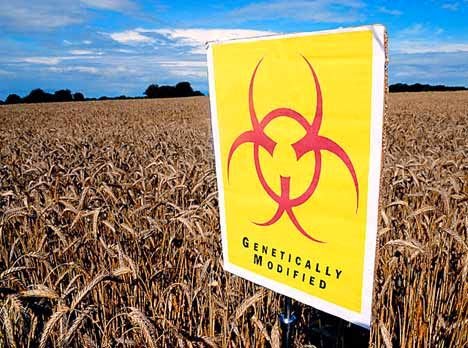 The issue of corn-destroying rootworms becoming resistant to the very crops designed to kill them – isn’t breaking news. Not only was it predicted before the advent of commercialized genetically engineered crops, but it’s been an ongoing problem.

Apparently, it’s become such a tipping point recently, that it’s finally starting to turn heads in the mainstream corporate media. Or at least they have finally taken heed of a new study on March 17th, that confirms corn rootworm resistance.

The type of biotechnology we’re talking about here is Bt corn with the “pesticide” donor gene Bacillus thuringiensis already built in so that there isn’t much need to spray chemical pesticides. Bugs eat the living biocide (which is a gene from a soil bacterium) – their stomachs are destroyed – they keel over. Well, that was the original gist of it.

Three types of Bt corn account for over three quarters of all U.S. corn crops. The monochromatic farming landscape is the perfect launchpad for empowered resistant superpests to spread.

Entomologist Aaron Grassman led his team in the study released on Monday in Proceedings of the National Academy of Sciences. They pinpoint the scourge beginning in Iowa in 2009, and chart pest resistance from there. Amazingly, it’s the low toxicity of some of the Bt corn accounting for the spread of resistance.

Notably, when Bt corn first arrived in 1996 there were no glaring issues as far as agriculture was concerned. And even around 2003 when many farmers were still happily embracing the product – it did the hitjob. To say it was always faulty would defy logic, bring the farmers’ logic into question and wouldn’t account for the massive profits it garnered. Since not all farms are affected, many many farmers still hold to this technology, so it is easy to see why they would take that gamble when dealing with thousands of acreage. (Reminds me of the current problems facing antibiotics.)

But, this “savior of the food system,” that was supposed to save billions of dollars in crop loss is leading the destruction, as rootworms and other pests now devour Bt for breakfast. The year 2003 seems to be the tipping point, when scientists started sounding the warnings of resistance. Now, farmers are going to have to spray pesticides on top of Bt corn crops, completely nullifying the point of their existence.

Farmers are getting blamed by all sides. Mainly for not planting enough non-GMO corn along with the GMO corn – did you know farmers were supposed to do that? Yet, if low toxicity of Bt accounts for resistance then how can the blame only apply to farmers who are expected to mix the crop with non-toxic plants? The idea behind co-planting non-GMO corn is the theory that the bugs eating different diets will co-mingle and be less likely to spread resistance to offspring. Hmm….

Scientists like the one in this study are pointing fingers at everyone – farmers, lawmakers, regulators, and corporations. Hard to find fault with their way of saying “I told you so!” But in the end, the suggestion is almost always “better management.” It’s never the fault of the technology. The scientists who suggest alternatives like bio-diversity in place of Big Biotech (which invested billions and wants a return) aren’t met with much approval.

Both a Midwestern emergency farm consultant and an entomologist, however, have suggested simple crop rotation to ease this problem. There is also an improved conventional corn that is performing better than GM corn.

Another instance to give pause — the aforementioned emergency farm consultant; his phone rings off the hook when there’s a storm that reveals blown over GM corn crops destroyed by the rootworm.

Ponder this with me…the fact that there is now a successful job market for that, thanks to this branch of biotechnology.

Life cycle of the corn rootworm: 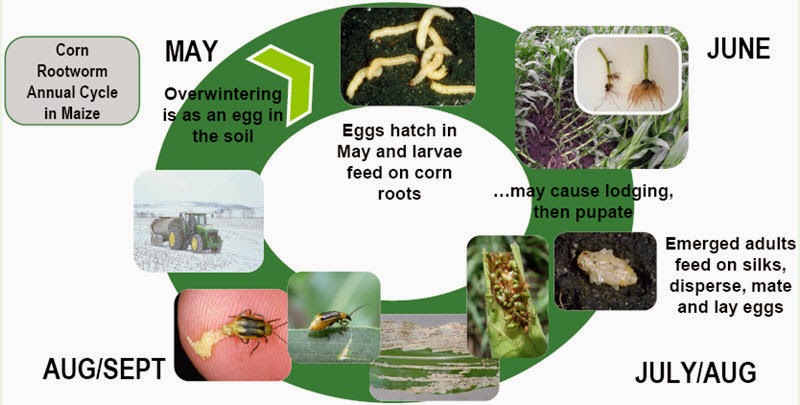