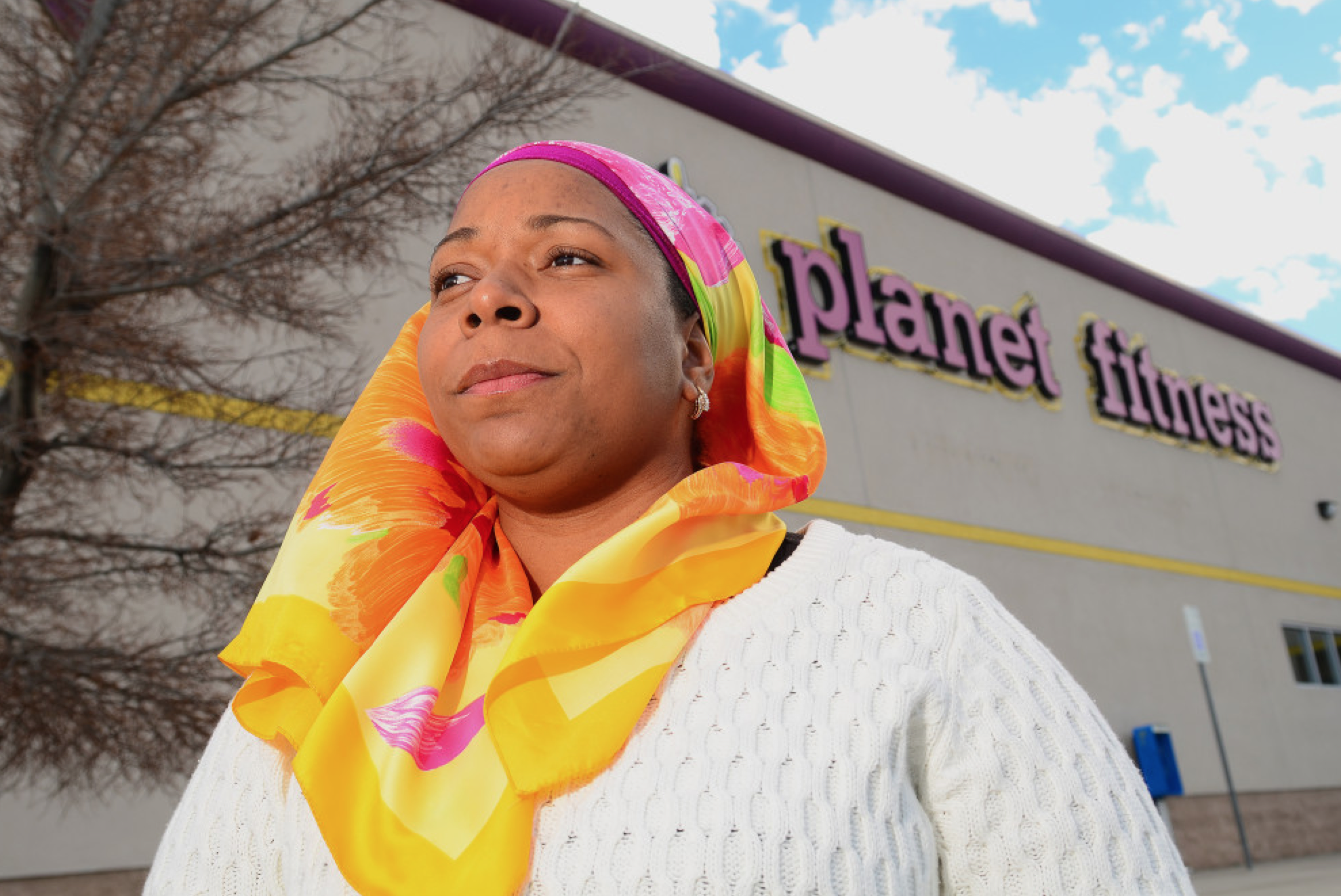 Another day, another Muslim supremacist lawsuit. Obviously headgear is prohibited in this gym because it presents a safety hazard. But people’s safety be damned. Islam abrogates everyone and everything.

When Anderson asked if she told them she was Muslim, McDaniel replied, “I sure did.”

This suit mirrors the melee that ensued at New York Playland Park when park officials adhered to their safety rules in order to keep park attendees free from harm. Muslim visitors got angry that the park was enforcing its ban on headgear by prohibiting the women from wearing their traditional head coverings on some rides. The park implemented a headgear ban over four years ago to keep hats and other head coverings from landing on tracks and derailing rides.

“It’s a safety issue on rides. If it’s a scarf, you could choke.”

Muslim visitors got angry that the park was enforcing their safety rules, and a violent riot broke out. That is Islamic supremacism. Our way or we will destroy. Respect it, kuffar!

It is also mimics the lawsuit filed by Hamas-linked CAIR and Naima Mnasri (whose Facebook page sports the pro-Muslim Brotherhood Rabia symbol) against a plastic vitamin bottling company. Safety concerns are jahiliyya! Sure, just a couple of weeks ago in Montreal, a Muslim woman got her hijab caught in an escalator and was killed, but it was the will of Allah! Wherever Islamic law and American law conflict, American law must give way.

The PC NM Human Rights Commission is likely to throw the book at Planet Fitness. Personally, I think this could set a dangerous precedent, because I believe someone’s hijab could easily get caught in some of the equipment and injure them.

ALBUQUERQUE >> An Albuquerque Planet Fitness refused to let a New Mexico Muslim woman wear her religious head covering while she tried to work out, according to a new lawsuit.

An attorney for Tarainia McDaniel, 37, recently filed the lawsuit in a New Mexico district court stemming from an October 2011 clash that prevented McDaniel from using the gym, even though court documents said another Planet Fitness had previously let her, the Albuquerque Journal reports (http://goo.gl/lqi6Xj).

According to the lawsuit, McDaniel joined New Hampshire-based gym chain Planet Fitness in Albuquerque on a two-year contract and later transferred to another gym location. But the lawsuit said on Oct. 3, 2011 she was turned away at her new gym and was told the head covering didn’t meet its dress code.

McDaniel said she even offered to wear a hijab, the formal head covering.

Anderson said she could not comment further on pending litigation.

McDaniel’s civil lawsuit, filed under the New Mexico Human Rights Act and the Unfair Practices Act, alleges the Planet Fitness illegally based the decision to deny her access upon her religion, or alternatively upon her race — she is African American — and that the gym had no legitimate or non-pretextual reason to deny her entry.

Planet Fitness, in its formal answer to the claims, denies violations of either the Human Rights Act or Unfair Practices Act. It says McDaniel failed to participate in good faith and that the company has legitimate business reasons for its practice as well as measures to prevent discrimination.

According to McDaniel’s deposition, she said the Quran “is pretty specific on covering your hair” and dressing modestly in clothes that fit loosely.

In the deposition, Anderson asked if McDaniel recalled a sign posted at Planet Fitness that said “no jeans, work boots, bandanas, skull caps or revealing apparel.”

According to the transcript, McDaniel acknowledged seeing the sign, but added, “I already (had) made it known before I signed the contract that I covered my hair. I had on (what) I call a head covering. I guess for the sake of the record, they’re referring to it as a head covering.”

When Anderson asked if she told them she was Muslim, McDaniel replied, “I sure did.”