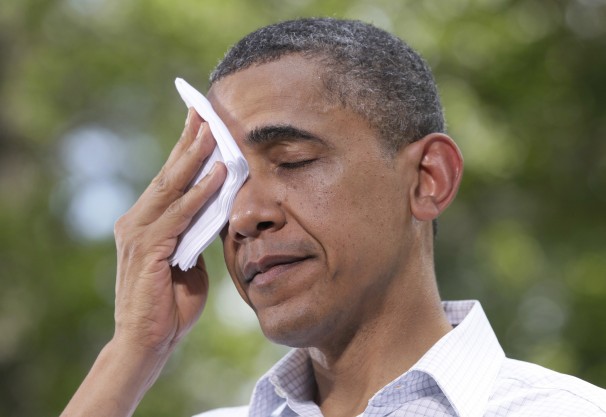 A lot of hopes have been riding on the Alabama Supreme Court and specifically Judge Roy Moore for some time. For many months people have been anxiously awaiting for Alabama to rule and in the end The Cotton State “ruled not to rule.”

How does a court rule that they have no opinion? These are our courts. We go to them when we can not resolve situations without them. Then they tell us that they can not rule on this and pass the buck back to the Secretary of State and legislators? This is unreal and it shows how corrupt and gutless the entire system is.

One of the last remaining court battles over Barack Obama’s presidential eligibility has gone down in flames in a 7-2 decision by the Alabama Supreme Court to render “no opinion.”

However, the dissenting minority of Justice Tom Parker and Chief Justice Roy Moore concluded the case has serious constitutional significance, warranting an investigation of the qualifications of 2012 presidential candidates by Alabama’s secretary of state.

Moore wrote in his dissent that the circuit court should have granted the plaintiffs’ request to order the state secretary of state “to implement the natural-born-citizen requirement of the presidential-qualifications clause in future elections.”

“Although the removal of a president-elect or a president who has taken the oath of office is within the breast of Congress, the determination of the eligibility of the 2012 presidential candidates before the casting of the electoral votes is a state function,” Moore argued.

He said the case was of “great constitutional significance in regard to the highest office in our land.”

“Should he who was elected to the presidency be determined to be ineligible, the remedy of impeachment is available through the United States Congress, and the plaintiffs in this case, (Hugh) McInnish and (Virgil) Goode, can pursue this remedy through their representatives in Congress.”

Impeachment? Oh sure. That will work.

Let’s turn congress red in 2014 folks and then MAYBE we will get the impeachment process going. And MAYBE we will actually get a conviction and remove Obama 2-3 months before he was scheduled to leave office anyway. Until then let’s keep accumulating the damage that this president is doing to our economy and foreign relations.

People want results and they wanted them yesterday. However we are stuck in a system that is so complex that things can be redirected and tied up in the process for as long as it takes.

Brian Lawson of AL.com explains the suit in more detail:

The Alabama Supreme Court has upheld the dismissal of a 2012 lawsuit which wanted Alabama’s Secretary of State to certify the birth certificate of each presidential candidate before allowing their names to appear on the general election ballot.

The court ruled 7-2 on the issue, with Chief Justice Roy Moore one of two justices who dissented from the majority’s decision, arguing the lower court should have directed the secretary of state to check candidate birth certificates.

The lawsuit was filed in Montgomery Circuit Court in October 2012, 26 days before the general election, by Madison County resident Hugh McInnish and independent presidential candidate Virgil Goode. The lawsuit wanted the court to order then-Secretary of State Beth Chapman to obtain the “certified” birth certificates of each candidate as part of her duty to verify candidate eligibility.

The Supreme Court majority upholding the lower court decision did not write an opinion, but justices Bolin and Bryan both wrote concurring opinions. Moore wrote a dissent, arguing the Alabama Secretary of State has a duty to investigate a presidential candidate’s qualifications.

Bolin wrote that it was desirable to check the qualifications of each candidate and the Alabama Legislature should authorize certain investigative and related powers to the Secretary of State’s office to conduct such checks in the future, but he said for now, the office did not have the authority to engage in such checks.

Bolin found that the law does not compel an investigation of candidate eligibility by the secretary’s office and noted that other courts have found the issue of qualification is best left to the parties that nominate their candidates. He pointed out that the Secretary of State has no subpoena power or investigative authority.

Bryan wrote that he agreed with Bolin that the law does not currently require the secretary’s office to investigate the qualifications of presidential candidates. Bryan also agreed that there is no current law that allows an Alabama court to “entertain a pre-election challenge to the qualifications of a presidential candidate appearing on the general election ballot in this state.”

This was not really a simple case of “We the People v. Obama” as many believe.

What if the appeal would have succeeded? What if the court would have ruled against the Secretary of State? Would it have changed who is sitting in the White House?

Romney won Alabama. And even if they changed the total to 100% for Romney and declared Obama ineligible, it would still not effect the electoral vote. This suit was never going to do anything of great significance to change the outcome of the election. At best it was simply a chance for a moral victory that might snowball into bigger successes.

Chief Justice Roy Moore and Justice Tom Parker wrote opinions of dissent on this ruling. However, once again it was not enough. The system has been corrupt and unchecked for so long that we have to take consolation in the fact that we have a few good ones left.

I can’t even say for certain that the ruling was not correct in this case. But, it does show average Americans that there is something of greater constitutional significance than anything Judge Roy Moore mentioned in his dissenting opinion.

The system is broken beyond immediate repair. It is a system that thrives on the very fact that anything can be tied up in court or congress for as long as needed, until the American people simply give up and accept that they have no voice and no power.

This is how they grind us down every day. The elite can and will continue to do whatever they want. And even if we catch them with their hands in the cookie jar it takes months or years of wasted effort before we get a big fat reminder that there is no real way to oppose government.

So what do you think? The Cold Case Posse has their big announcement coming soon. What difference might that make? We can certainly hope for the best but this is how I see it…

There is more than reasonable doubt that Barack Obama has forged documents and there has been for some time. The evidence has been gathered and someone needs to rule on it. If this were you or I, we would have already been arrested and/or issued with a summons to appear.

It doesn’t quite work that way in Washington.

I’m not a judge but I think that might be constitutionally significant as well.