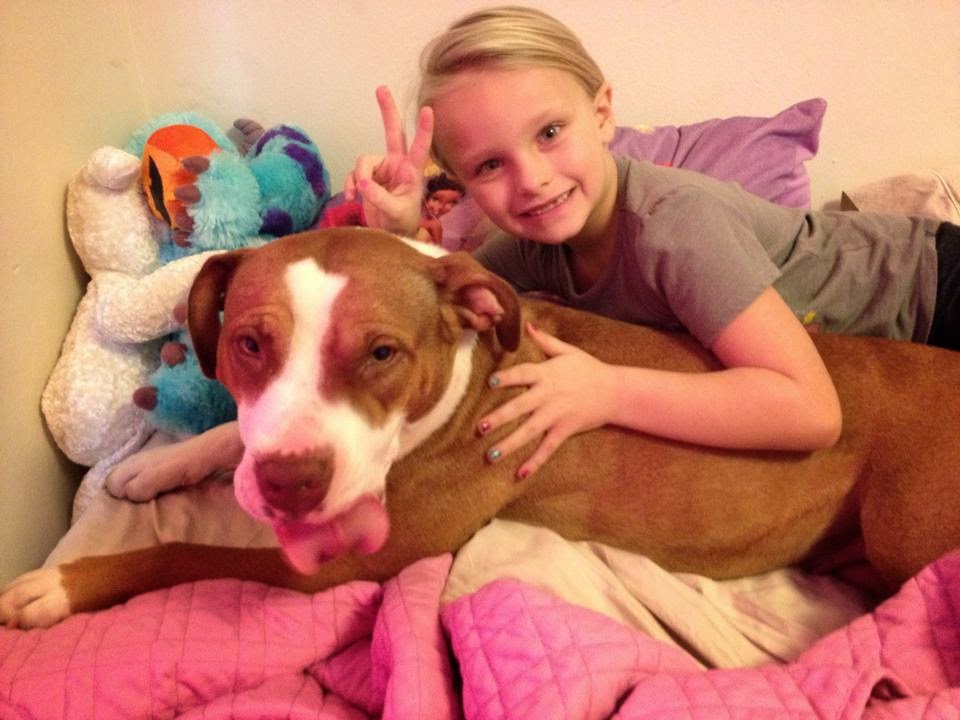 A benevolent pit bull named Cali has died after officer Brice Woolly of Ardmore Police Department in Oklahoma blasted her in the neck with a shotgun on March 19.

On that day, Cali escaped the backyard fence and a neighbor called animal control to retrieve the dog. Unfortunately, officer Woolly arrived first.

You might be aghast when you hear what Woolly said when he bragged and laughed about shooting a dog that was just standing there, and then bragged again about another shooting. Then there is his murderous past and what he told the animal control officer to do next….

When officers arrived, someone told them that animal control was on the way. According to a witness, Officer Brice Woolley said, “I’m not waiting for animal control.” He went to his car, got his shotgun, did the deed and then bragged to animal control about how “awesome” it looked when the collar flew off her neck. Specifically, “did you see her collar fly off when I shot her? That was awesome” as he laughed. He went on to brag about a dog he shot two days earlier with a pistol.

When animal control arrived (who work for the department), Woolly is quoted as saying,  “We will just write up the report as she was attacking you and other neighbors and blah blah blah.” Meaning “blah blah blah” as in business as usual.

Unlike a lot of dogs who are left to bleed out while the officer finishes talking and ticketing someone for a loose dog, Cali died immediately. To make matters worse, the animal control officer who was being bragged to and apparently went along with falsifying the report, walks up to an already dead Cali and shoots her again near the rib cage.

But Cali didn’t attack, according to witnesses. She certainly didn’t pose a threat to the officer who had time to walk to his car, obtain his shotgun, walk back and shoot her directly in the neck, presumably at close range. When Cali’s owner, Sarah, arrived holding her 6-month-old infant, the officer said: “She’s dead. I just shot her.” After finding out, Sarah broke down and cried and walked back into her house.

Without looking at witness evidence, the department simply told Sarah the officers were in their right when they shot her dog after she went to the office to complain.

Officer Brice Woolly has shot and killed a person while working at a previous Oklahoma department in Tishomingo. The city had to reach a settlement and let Woolly go. You can see footage and description here. It was someone who took too long to stop and then ran. Woolly was caught lying about the account when the testimony did not match the timing and footage of the dashcam. Somehow, he made it to Ardmore department even after failing psychological exams, and has killed at least two dogs.

I am posting these pictures because the owner has posted them publicly to raise awareness of officers gratuitously shooting innocent dogs.

Not many of us see the brutal reality of pet owners having to deal with their dead friends in the yard or on the neighborhood street after an officer casually walks away from the gore. The shotgun wound appears to be very close range.

If an officer can do this and get away with it, what else Is going on!? Something has to be done not only for Cali but for the many other dogs that are shot even in their very own yards for absolutely no reason! This isn’t right and something has to be done! Share and invite as many people as you can to get this out. This needs to be exposed along with many other incidences! Cali did not deserve this!!

Other similar disturbing instances (aside from the hundreds and hundreds of pets who get shot by police each year – over 400 one year in Chicago alone. And Milwaukee) include the following: 1) Police are using live injured animals for target practice. For real. If you don’t know about this yet – you need to. Please drop everything and go here.

And 2) a cop shot a mildly injured deer in front of a child when the family tried to take it to a rescue center. He threatened them with force and arrest for even suggesting that they could help. As you can see from that story, the same exact police tactics are being simultaneously deployed both in the U.S. and Canada – it didn’t just happen, and it’s not due to “lack of training.” It is meant to cause trauma and shutdown, especially when there is no threat from the dog to the officer. To date, no on-duty officers have been killed by dogs.

This unnecessary and unequivocally psychopathic behavior is important to know about for awareness and safety. Think twice before calling 9/11 when it comes to pets! Talk to your neighbor first. As it happens, the neighbor called animal control which is a part of their police department – how could anyone have known that this would happen to Cali?

The family is not letting this killing go unheard. To be sure, their petition isn’t typical – it goes to both Ardmore Police Department and Oklahoma’s Governor.