Last night I played Happy; today the enemy woke me up.  Look at this photo. This best illustrates the battle we are fighting. The savages vs the civilized man. A culture that hails the exaltation of life versus an airless, anti-humane ideology that reveres death, carnage and barbarity. This is a Westernized Muslim from Iraq, now in Syria, but it is hardly exclusive to the Muslims in Iraq or Syria or Nigeria etc. Devout Muslims in Afghanistan (the Taliban) use these heads as soccer balls, and devout Muslims in Syria have massive human slaughterhouses. Devout Muslims in Nigeria are setting schools ablaze and slaughtering children, doctors, and teachers. Thailand, too. Obama says, “Respect it!” Geller says, “He’s nuts.”

Here is a pious Muslim who lived in the West for 10 years at the largesse of the taxpayer. And this is what emerged. 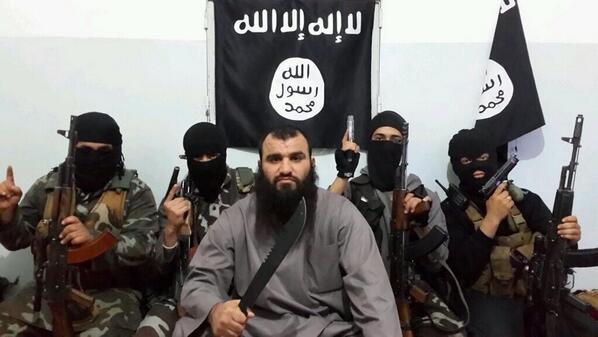 You Tube: Jihadi from the Netherlands with Five cut-off Heads

Abdurahman, apparently a Dutch jihadi from Almere, can be seen on You Tube with a bloody knife behind five cut-off heads. He is originally from Iraq, and has lived more than ten years in The Netherlands. He lived there from social security as he was found unfit to work and used drugs against claustrophobia and schizophrenia.

In 2012 an AFP picture emerged on which Abdurahman could be seen next to a dead body, while he was reading the Koran. Initially he joined the Jabhat-al Nusra movement in Syria, which is linked to Al Qaida. It seems that he has now moved to the even more barbarian ISIS jihadis. It is claimed that the heads were cut off from Al Nusra fighters.