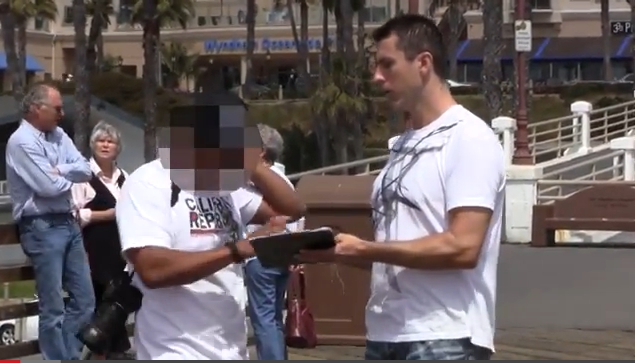 Mark Dice, a video blogger who became famous for his man-on-the-street interviews where he allows average Americans to display their utter lack of awareness and mental acuity, has had his primary Youtube channel summarily removed for “severe violations of our community guidelines,” despite the fact that Dice is well-known for keeping the language on his videos clean and refraining from any type of hate speech.

YouTube has not supplied any further information about the “violations.”

Dice had over 800 videos on the channel, and millions of viewers.

Editor’s Note: The video that was provided by The Daily Sheeple has already been deleted as well. I found an episode of “The Pete Santilli Show” (above) that also covers the story. I have not listened to the show as of yet so I am not sure which segment talks about Dice. Hopefully this will not be taken down. -Dean Garrison

Show your support for freedom of speech:

You can find Mark’s secondary channel HERE… (for now).

You can also find Mark on Twitter and Facebook…(for now).

Editor: Since The Daily Sheeple first ran this story yesterday (3/22/14), the video and secondary account have now been disabled as well. Here is Mark’s statement which can be found at MarkDice.com:

YouTube has deleted my channel, YouTube.com/MarkDice and removed all 800+ of my videos for what they said were “Severe Terms of Service Violations” which is a lie and they have disabled the dispute feature, which usually allows users to file a dispute when videos get removed.  Over 55 million views total, 3-5 million per month, 265,000 subscribers, and over 800 videos GONE!  They deleted my BACKUP channel a few hours later for the same reason.  This happened less than a week after YouTube granted authority to 200 “super flaggers,” many of which are government agents, who now have the power to remove any video or channel they want to for any reason.   I’m serious.  Look it up.

Thanks for all your support and feedback. I’ll see what I can do, but as you know it’s nearly impossible to tell the truth on a platform that’s owned by a company that works hand in hand with the NSA and other government agencies.  I have had videos flagged and removed in the past and after filing a dispute they almost always get restored, but this time they just shut down my entire channel and currently are not allowing me to even file a dispute, then hours later did the same thing to my backup channel.  Check my Facebook or Twitter for updates as they come in.

Might be a good time to buy some of my books if you want to continue supporting me and continue with your education.  They’re not in stores, but are in paperback on Amazon and available on most e-readers.  Thanks again for all the support.  You can also donate via PayPal by clicking the link on the right side of the page if you would like to support my work that way.