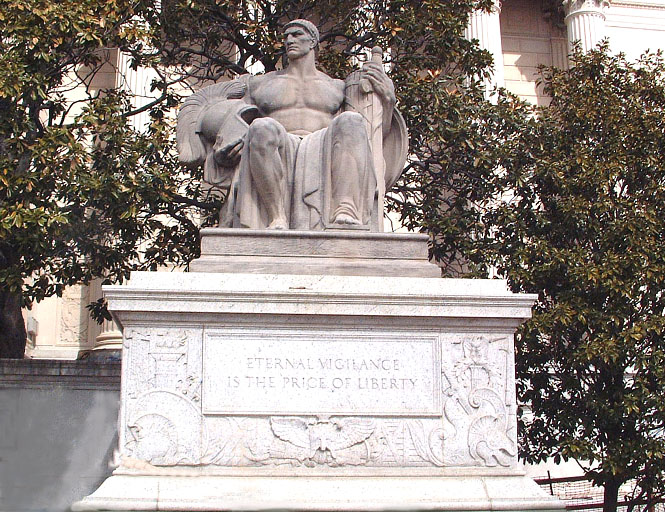 The saying “Eternal vigilance is the price of liberty” is a stirring reminder that we must always be alert to threats against our freedom. Liberty is not fragile, because, once people experience true freedom they refuse to give it up. But freedom can be stolen from us if we don’t pay attention to what is happening. Thus, the first duty of every citizen is to guard against this theft by exercising “eternal vigilance.”

Defending freedom against its enemies can be a tricky proposition, because it is often difficult to identify those enemies. They often disguise themselves as protectors of freedom, while modifying the laws that guarantee it until those laws are repealed or made ineffective. These are the enemies within and they are far more dangerous than those who would attack us from the outside, because they will lie cleverly to hide their real intentions. This lying is the first danger against which we must be eternally vigilant, and the greatest liars too often are politicians and those who work with them.

These enemies of liberty usually begin by describing grievances that they insist must be addressed. These grievances are always claimed in the interest not of individuals, but of collective groups. Most often these grievances are invented as excuses to pass laws that give government more power and a bigger budget. Political power is always power over people. Politicians are not entitled to power over us. They are elected ONLY to protect our unalienable rights, not to steal them.

To protect ourselves, we must continually remember that our freedom and rights as individuals are not granted by government and must never come into question, no matter what grievance politicians claim they must address. We must always remember that when politicians seek to limit individual rights in favor of some group, they are not really interested in righting wrongs, but merely in gaining more power for themselves.

It is a fundamental principle of free society that each individual citizen’s rights are unalienable. This means that the assertion of collective rights that infringe on the rights of individual liberty, those rights are not legitimate and laws purporting to protect them are equally illegitimate. It is easy to misinterpret this concept, but an example may clarify it. When Lincoln signed the Emancipation Proclamation, he did so to free the slaves, not as a collective mass that needed protection, but as individual citizens, each with his own unalienable rights. That is the true meaning of freedom.

Corrupting society’s understanding of rights always comes gradually, so that people do not immediately realize the full negative impact on freedom. Norman Thomas, six times the Presidential candidate of the Socialist Party of America, once stated, “The American people will never knowingly adopt socialism. But, under the name of ‘liberalism,’ they will adopt every fragment of the socialist program, until one day America will be a socialist nation, without knowing how it happened.”

This is why politicians always introduce their proposed changes stealthily in language that is unclear and ambiguous. Some changes are introduced as benefits at first, and only after they take effect are found to be dangerous liabilities. The obligation of every citizen is to guard and protect our unalienable individual rights by refusing to accept “collective rights.” Any changes that lead us away from our free republic into a Liberal Socialist oligarchy or dictatorship should be shouted down loudly and those who try to destroy the fabric of our freedom should be driven from office by the most powerful tool of every eligible citizen, the vote at the ballot box.

Every American citizen over eighteen is allowed to vote in elections. There are exceptions to this rule, such as when someone is incarcerated for committing crimes. But we do not vote for laws. We vote for people to make the laws. Politicians are elected to office to represent the best interests of citizens in legislatures that make laws either supporting or abrogating the freedom and rights of every individual citizen. Therefore, it is the duty of every qualified citizen to vote wisely and to remember that a bad politician will make bad policies, the worst of which can take away their freedom and rights. We must remember that political power is power OVER people. Citizens must elect politicians who will protect their rights and freedom and not elect those who would take them away.