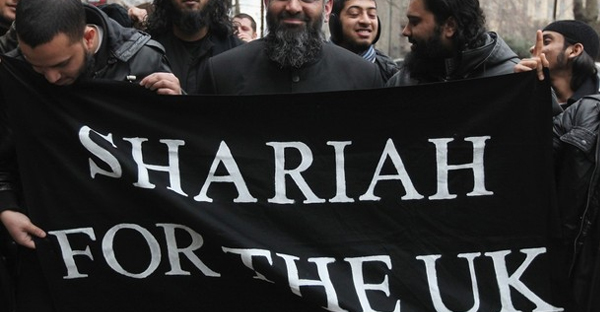 Nail, meet coffin. When I said that the British government was, in fact, enforcing sharia law when they banned me from Great Britain, I was not overstating it. In a stunning move towards complete capitulation, the Brits have just adopted sharia law.

“Islamic law is to be effectively enshrined in the British legal system for the first time under guidelines for solicitors on drawing up ‘Sharia compliant’ wills. Under ground-breaking guidance, produced by The Law Society, High Street solicitors will be able to write Islamic wills that deny women an equal share of inheritances and exclude unbelievers altogether.”

They are officially and legally enforcing the misogyny and supremacism over non-Muslims. The land of the Magna Carta is dead. I wasn’t overstating that, either.

Under ground-breaking guidance, produced by The Law Society, High Street solicitors will be able to write Islamic wills Photo: ALAMY

Islamic law is to be effectively enshrined in the British legal system for the first time under guidelines for solicitors on drawing up “Sharia compliant” wills.

Under ground-breaking guidance, produced by The Law Society, High Street solicitors will be able to write Islamic wills that deny women an equal share of inheritances and exclude unbelievers altogether.

The documents, which would be recognised by Britain’s courts, will also prevent children born out of wedlock – and even those who have been adopted – from being counted as legitimate heirs.

Anyone married in a church, or in a civil ceremony, could be excluded from succession under Sharia principles, which recognise only Muslim weddings for inheritance purposes.

Nicholas Fluck, president of The Law Society, said the guidance would promote “good practice” in applying Islamic principles in the British legal system.

Some lawyers, however, described the guidance as “astonishing”, while campaigners warned it represented a major step on the road to a “parallel legal system” for Britain’s Muslim communities.

Baroness Cox, a cross-bench peer leading a Parliamentary campaign to protect women from religiously sanctioned discrimination, including from unofficial Sharia courts in Britain, said it was a “deeply disturbing” development and pledged to raise it with ministers.

“This violates everything that we stand for,” she said. “It would make the Suffragettes turn in their graves.”

The guidance, quietly published this month and distributed to solicitors in England and Wales, details how wills should be drafted to fit Islamic traditions while being valid under British law.

It suggests deleting or amending standard legal terms and even words such as “children” to ensure that those deemed “illegitimate” are denied any claim over the inheritance.

It recommends that some wills include a declaration of faith in Allah which would be drafted at a local mosque, and hands responsibility for drawing up some papers to Sharia courts.

The guidance goes on to suggest that Sharia principles could potentially overrule British practices in some disputes, giving examples of areas that would need to be tested in English courts.

Currently, Sharia principles are not formally addressed by or included in Britain’s laws.

However, a network of Sharia courts has grown up in Islamic communities to deal with disputes between Muslim families.

A few are officially recognised tribunals, operating under the Arbitration Act.

They have powers to set contracts between parties, mainly in commercial disputes, but also to deal with issues such as domestic violence, family disputes and inheritance battles.

But many more unofficial Sharia courts are also in operation.

Parliament has been told of a significant network of more informal Sharia tribunals and “councils”, often based in mosques, dealing with religious divorces and even child custody matters in line with religious teaching.

They offer “mediation” rather than adjudication, although some hearings are laid out like courts with religious scholars or legal experts sitting in a manner more akin to judges than counsellors.

One study estimated that there were now around 85 Sharia bodies operating in Britain. But the new Law Society guidance represents the first time that an official legal body has recognised the legitimacy of some Sharia principles.

It opens the way for non-Muslim lawyers in High Street firms to offer Sharia will drafting services. The document sets out crucial differences between Sharia inheritance laws and Western traditions.

It explains how, in Islamic custom, inheritances are divided among a set list of heirs determined by ties of kinship rather than named individuals. It acknowledges the possibility of people having multiple marriages.

“The male heirs in most cases receive double the amount inherited by a female heir of the same class,” the guidance says. “Non-Muslims may not inherit at all, and only Muslim marriages are recognised.

Similarly, a divorced spouse is no longer a Sharia heir, as the entitlement depends on a valid Muslim marriage existing at the date of death. This means you should amend or delete some standard will clauses.”

It advises lawyers to draft special exclusions from the Wills Act 1837, which allows gifts to pass to the children of an heir who has died, because this is not recognised in Islamic law.

Keith Porteous Wood, executive director of the National Secular Society, said: “This guidance marks a further stage in the British legal establishment’s undermining of democratically determined human rights-compliant law in favour of religious law from another era and another culture. British equality law is more comprehensive in scope and remedies than any elsewhere in the world. Instead of protecting it, The Law Society seems determined to sacrifice the progress made in the last 500 years.”

Lady Cox said: “Everyone has freedom to make their own will and everyone has freedom to let those wills reflect their religious beliefs. But to have an organisation such as The Law Society seeming to promote or encourage a policy which is inherently gender discriminatory in a way which will have very serious implications for women and possibly for children is a matter of deep concern.”