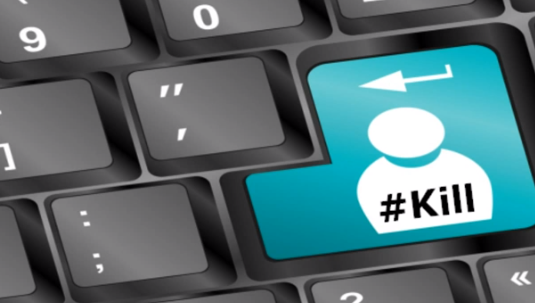 Underscoring once again how many feminists have misappropriated the women’s rights movement into an excuse for hating men, Twitter was once again flooded yesterday by a number of users who expressed their desire to #killallmen.

Imagine the outrage if a group of male bigots had descended on the social network to promote the trend #killallwomen – accounts would be deleted and feminists would be up in arms at such a brazen display of misogyny.

However, when the shoe is on the other foot, violent man-hating rhetoric is apparently perfectly acceptable.

Casually joking about the genocide of an entire gender was justified in the minds of feminists for a number of reasons, including the horror of a man asking for a woman’s phone number.

One woman was upset about men ruining her night out.

Another wanted to #killallmen because a couple of them – God forbid – tried to chat her up.

Another feminist celebrated how #killallmen was an example of “beautiful misandry,” ie the hatred of men.

Perhaps in homage to the recent “ban bossy” campaign, another feminist invoked #killallmen because they didn’t like the fact that an office colleague had used the word “manshake”.

Someone in my office just said "manshake" as if that's a thing. #killallmen

A male feminist even got in on the act, telling men’s rights activists who didn’t like the #killallmen theme to “go away and die”.

Oh, so, worse than #killallmen are men's rights activists. Go away and die, all of you. I wish the cold which currently afflicts me upon U.

Others speculated on how such executions would be accomplished.

Of course, no one is suggesting that feminists really want to wipe out the male population, that would be silly, but then again some of the tweets actually do call for outright genocide.

“Not endorsing that we #killallmen, (some of my best friends, etc), but reducing men to 1 in 4 would solve many of Society’s problems,” wrote Anna Lieff-Saxby, before adding “I was thinking of foeticide, rather than bumping off 3/4 of the current male population. But then again I’ve got a little list.”

Of course, eliminating three quarters of the male population would also mean the ethnic cleansing of numerous minority groups, but calling for the genocide of blacks, Jews, and Arabs is only acceptable when disguised behind the all encompassing umbrella of misandry.

“How is one supposed to respond to this?” asks Michael McKenna, concluding, “There’s no point. There isn’t anything there for us. One can’t reach any sort of understanding with a person who is both committed to saying inflammatory things, and determined not to mean them.”

Yesterday’s #killallmen hashtag also began trending as news broke of an incident at the University of California-Santa Barbara during which department of feminist studies professor Mireille Miller-Young led an angry mob to confront a pro-life protest that was taking place within the university’s designated free speech area.

Miller-Young violently seized a sign belonging to 16-year-old student Thrin Short and then prevented her from retrieving the placard by grabbing and pushing the student, leaving her with numerous scratches and bruises. Miller-Young was charged with vandalism, battery, and robbery yet remained unrepentant, asserting she had “set a good example for her students” by violently assaulting the student and infringing on her right to free speech.

The incident again highlights how mainstream feminists resort to violent, bullying, authoritarian tactics to silence anyone who dares to disagree with them, in the process discrediting other genuine feminists who are attempting to focus on legitimate women’s rights issues.