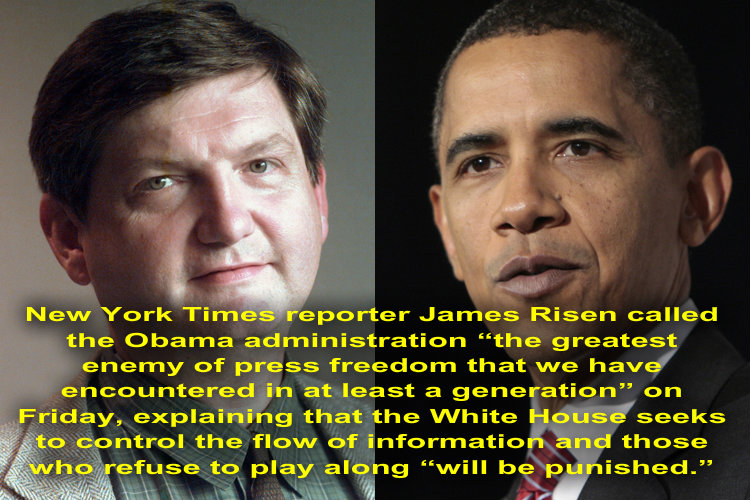 Before First Lady POS Mooch and her “entourage” of 70, including her devil-worshiping mom, left on their TAXPAYER-PAID vacation in China, the White House had announced that Queen Michelle wouldn’t field any questions from journalists she encountered in China.

So it’s most ironic that while in Beijing, staying in a $8,350-per-night hotel suite PAID FOR BY U.S. TAXPAYERS, the she-male had the gall to lecture to the Chinese about free speech.

Vendors at the entrance to the Great Wall were ordered by the Chinese Communist Party government to (temporarily) remove this t-shirt of Obama as a Mao commie to protect the delicate sensibilities of Mooch when she and her entourage of 70 toured the Great Wall. (h/t FOTM’s swampygirl)

More ironic still is the fact that while she’s prattling on about free speech, James Risen, a Pulitzer Prize-winning journalist for The New York Times, calls “her” husband “the greatest enemy of press freedom.”

New York Times reporter James Risen called the Obama administration “the greatest enemy of press freedom that we have encountered in at least a generation” on Friday, explaining that the White House seeks to control the flow of information and those who refuse to play along “will be punished.”

Poynter reports that Risen made the remarks while speaking at Sources and Secrets conference — a meeting of journalism, communication and government professionals held in New York City. The foreign policy reporter, who is currently fighting a fierce court battle with the federal government over his protection of a confidential source, warned that press freedom is under serious attack in today’s America.

In a speech kicking off the conference, Risen claimed that the Obama administration wants to “narrow the field of national security reporting” and “create a path for accepted reporting.” Those who stray from that path, he cautioned, “will be punished.”

The result is a “de facto Official Secrets Act,” Risen explained, making the current White House “the greatest enemy of press freedom that we have encountered in at least a generation.” And the media has been “too timid” in pushing back against the onslaught.

Some of that timidity was on display at the conference. Jeffrey Toobin, a writer for The New Yorker, denied that any constitutional protections for his profession even existed. “It won’t take me long to alienate everyone in the room,” he declared. “For better or worse, it has been clear there is no journalistic privilege under the First Amendment.”

Robert Litt, the administration’s top lawyer for the national intelligence community, agreed with that statement. At the same conference, he likened reporting on national security leaks to drunk driving, arguing that we ban the practice despite the fact that there isn’t always a victim.

“Not every drunk driver causes a fatal accident,” he explained, “but we ban drunk driving because it increases the risk of accidents. In the same way, we classify information because of the risk of harm, even if no harm actually can be shown in the end from any particular disclosure.”

Jeffrey Toobin was one of the reasons why I canceled my subscription to The New Yorker. Despite everything Obama has done — including inflicting damage on his own profession — Toobin, the sniveling piece of turd, is still carrying water for Pres. Lucifer.

Truly, “liberalism” is a mental disorder for which there is no cure.