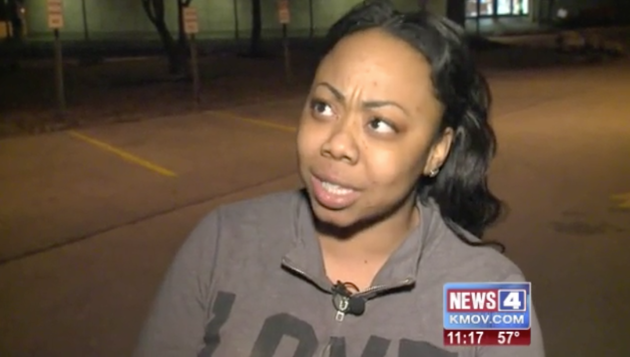 Missouri mother Niakea Williams received a phone call from her autistic son’s elementary school, a school that knew her well, to inform her that her child was emotionally distressed and panicking. Like any mother in this situation who cares about her kid, Williams rushed over there right away and the school buzzed her in.

Unfortunately though, Williams rushed in so fast, she forgot to sign the visitor’s book at the front office (even though, again, the school invited her and knew she was coming and why). She opted instead to immediately go to her son’s classroom and console the boy straight away.

Due to this egregious error on Williams part of putting her kid first, you know, in the day and age when ‘Merica is an all-out police state and schools across the nation are now suspending young children who make a gun shape with their fingers or eat their toaster pastries in the shape of a pretend gun, the principal thought it fit instead to call the cops on this mother for not following school protocol.

…because protocol is the law and everything…

After the mother had asked the principal to bring her the book so she could sign it (because, apparently, her son was her main priority), she said that the principal told her “Oh no, I’ve already called the police.”

I’m going to bold this next sentence for effect and openly tell you that I’m doing it:

This is despite the fact that this mother was not only a well-known school parent with a special needs child who was called there by the school, but Williams had apparently met with this exact same principal just the day before this happened.

Let’s pretend common sense doesn’t exist for a minute. Oh wait! You don’t have to pretend! The Calverton Park Police showed up post haste, throwing the whole school into a 12-minute lockdown for an unauthorized entry, you know, just for added effect.

As if children in our public schools aren’t already traumatized enough by all these lockdowns and suspensions for ridiculous things like eight year olds playing cops and robbers with finger guns. It’s almost as if schools are using fear to brainwash our children or something.

Have you ever seen the movie Brazil?

A time is coming in the not so distant future when we’ll get to a point that kids in American schools are so used to lockdowns for every conceivable reason that their minds will be programmed with the boy who cried wolf syndrome, and they won’t be able to distinguish what a real emergency or danger even is because apparently in this country’s public schools, everything is dangerous.

Ms. Williams thinks the whole ordeal was unnecessary, telling the station, “They escorted me away from my son, who already has emotional distress. Four officers told me to turn around and put my hands behind my back, I was under arrest.”

Did you catch that? It took four police officers — FOUR — to lock down the school and arrest this dangerous woman as she was consoling her autistic son.

And now the punchline with more bolding because I just can’t believe it:

The school was apparently so concerned this student was emotionally distressed, they thought it would be a good idea to let him snuggle his mother for a few minutes of comfort only to have her yanked away by four police officers and watch her get arrested for it?

As if a young child’s mind is really going to understand visitor book “protocol” is a reason for his mommy being hauled off to jail.

BUT WAY TO GO, SCHOOL. You know, because it’s all about the kids.

Williams has been officially charged with trespassing.

Fun fact. Did you know that when we give our children over to public schools each morning, they apparently become school property until school gets out?

At least, that’s what a federal court upheld in 2005 when it ruled that school rights trump parental rights:

Parents and politicians alike were shocked when the U.S. Court of Appeals for the Ninth Circuit ruled on Nov. 2 that parents’ fundamental right to control the upbringing of their children “does not extend beyond the threshold of the school door,” and that a public school has the right to provide its students with “whatever information it wishes to provide, sexual or otherwise.”

The court went on to clarify:

“Parents have no due process or privacy right to override the determinations of public schools as to the information to which their children will be exposed.”

So there you go. If you want your kids to be afraid of, well, everything including their own mothers, go ahead and take them on down to their nearest government indoctrination center where administration officials on power trips with “protocol” rule the day and common sense and logic is as extinct as a brontosaurus…

…or, wait, is that the one that never existed?