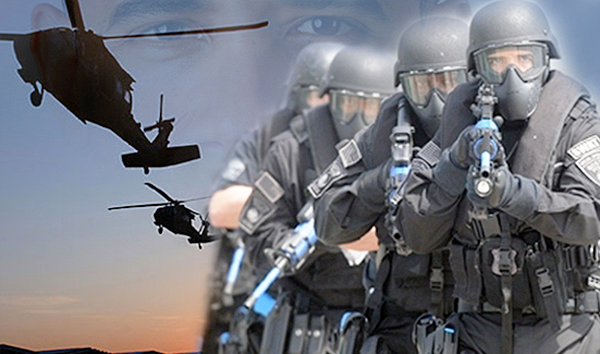 Fallujah came to Florida this week as residents in Fort Lauderdale were shocked to see Navy SEALS practicing storming a university building from a Black Hawk chopper as part of military drills taking place this week in Broward County.

As we reported yesterday, the media only announced that a Department of Defense exercise was taking place across the county after panicked residents reported low flying military helicopters on Monday evening.

The clip above shows a Black Hawk helicopter hovering low over the Florida Atlantic University building in in downtown Fort Lauderdale.

“They’re going to the top of FAU,” remarks the cameraman, adding, “That’s the big boy, look how big that one is man,” as the chopper hovers over the building. “Look at all the guys that are hanging on the side, practicing,” he adds.

In another clip from a different area of Fort Lauderdale, a man exclaims, “There are frigging Black Hawks flying around my condo.”

While the DoD says the exercises are designed to train U.S. troops in urban warfare techniques for use overseas, local reporter Chris Joseph said the drills served the dual purpose of “scaring the crap out of people,” just as similar drills in Miami in 2012 terrorized residents. Such drills habitually stoke concerns that authorities are acclimating Americans to accept a state of martial law.

News of the planned exercises first broke last month, but the city refused to release details due to “national security concerns”. According to the Sun-Sentinel, the drills, which run until tomorrow, will also involve “flash-bang devices and the sounds of gunfire”.

The exercises, which involve the Naval Special Warfare Development Group, will also be centered around using, “low-flying helicopters and simulated ammunition to train personnel on a “rooftop fast-rope insertion” into a building,” according to the report.

The drills will also involve the military conducting airborne surveillance of the city, although the U.S. Special Operations Command’s public affairs officer Ken McGraw said, “This collection will not be used to support local, state or federal law enforcement investigations.”

In another clip, a resident remarks, “Oh boy, here they come, this is like awesome,” as Black Hawk helicopters fly overhead.