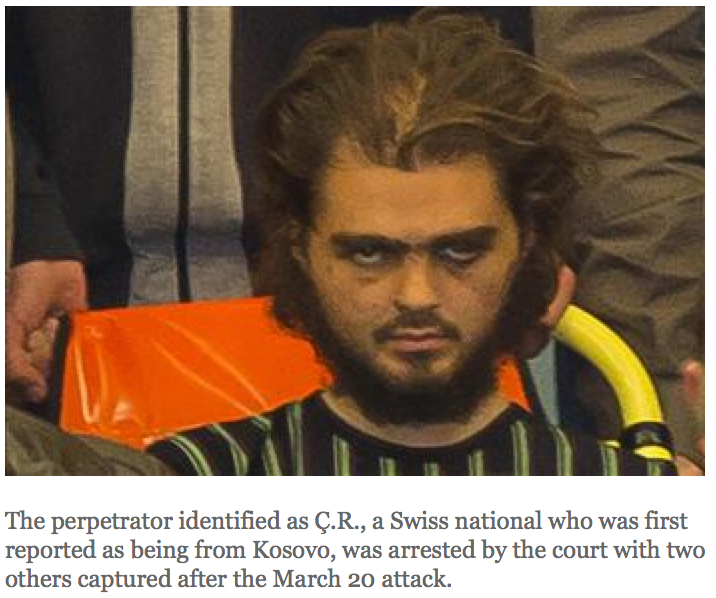 “I don’t render an account to anyone but Allah. I will not give any testimony. You are all pagans,” he was also quoted as saying. He also reportedly said Turkey was considered an “enemy” for being a NATO member.“

Kosovo. More of the Bosnian fruits of our American intervention on behalf of the Muslims against the Serb Christians.

‘I did a good deed by killing a Turkish gendarme,’ Niğde assailant says,”  Hurriyet Daily News, March 25, 2014 (thanks to Patricia)

One of the perpetrators of an attack against Turkish gendarmes in the Central Anatolian province of Niğde last week reportedly expressed no remorse for his act during his testimony in court after being captured by police.

“I did a good deed by killing the Turkish gendarmerie soldier,” the perpetrator identified as Ç.R., a Swiss national who was first reported as being from Kosovo, told police, according to Doğan News Agency.

The attack on March 20 left three dead and five injured, including a Turkish gendarmerie soldier and a police officer. All of the assailants, captured within hours, are suspected of being members of the Islamic State of Iraq and the Levant (ISIL), which is linked with al-Qaeda.

“I don’t render an account to anyone but Allah. I will not give any testimony. You are all pagans,” he was also quoted as saying. He also reportedly said Turkey was considered an “enemy” for being a NATO member.

Meanwhile, the driver of the assailants’ pickup truck, identified as B.X., denied being a part of the shooting and being a member of any organization. He reportedly explained he was accompanying Ç.R., whom he did not know before, on his way back to Kosovo.

“When [Ç.R.] saw the checkpoint, he directed his gun behind my back and started to open fire. When I asked him what happened, he shouted at me, telling me to drive the truck. I was under the influence of drugs when the incident happened. I did not see if any police or gendarmerie soldiers were shot or not,” he reportedly said.

A third assailant M.Z., a national of Macedonia, was also arrested by the court.

“Some people might want to cause unrest before the elections,” Deputy Prime Minister Beşir Atalay had claimed.

UPDATE: The Swiss newspaper Neue Zürcher Zeitung reports that the “Swiss terrorist” is not a Swiss citizen at all.  The information is attributed to the Swiss Department of State (EDA).  NZZ calls the original claim by Turkey’s Hürriyet newspaper that the perpetrator is a Swiss citizen a “canard.” (Thanks to Bestproject.)