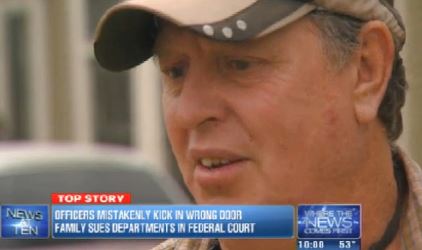 David and Connie Johnson were asleep when they heard a noise Connie later described as the “walls caving in.” Seconds later their front door was forced open and two armored strangers burst into the two-room apartment the middle-aged couple share with their adult son, Aaron.

Several other assailants were clustered behind the two who had forced open the door. One of them was a female holding a leash that barely restrained a large, snarling dog. One of the intruders pointed an assault rifle at David’s head and threatened to shoot him. Another invader, a female, bellowed, “Put your hands up! This dog will bite you!”

David was seized and shackled. Connie and Aaron were also dragged from their home. Neighbors who were drawn by the commotion poked their heads out and were ordered to go back into their rooms.

At no point in this encounter did the intruders identify themselves as police officers.

Two minutes later, the SWAT team that had terrorized the Johnsons arrested the Johnsons’ neighbor, Bill Gerst, who had been accused by a woman of threatening her. Gerst was forced to crawl on his belly toward the officers in order to be handcuffed.

“What’s going on?” Gerst repeatedly asked, plaintively explaining that there was nobody else in his apartment.

Gerst persisted in trying to find out why the cops had laid siege to his home.

“You shut your mouth!” one of the raiders snapped.

The police later told the Johnsons that they were dealing with a “homicide in progress.” No firearm, and no evidence of any criminal activity, was found during the February 21, 2013 raid.

According to a lawsuit filed by the Johnson family, “The information used to justify the no-warrant raid on Mr. Gerst’s apartment was shaky and legally suspect.” Specifically, it was a hearsay allegation made by someone who knew a woman named Hilda Valle, who is described in the suit as “a petty criminal who had reported to police that she had argued with Mr. Gerst and that he had threatened her with violence.”

At the request of the neighboring Nampa Police Department, which received the tip, a tactical team from the Caldwell Police Department conducted what they call a “welfare check” that was actually a guns-drawn, no-knock, SWAT-style raid. The Caldwell PD claimed knowledge of “the presence of guns at the premises” – which, according to the standard “threat matrix,” supposedly justifies a paramilitary assault.

Although the officers claim they were dealing with a “homicide in progress,” Police audio of the incident documents that the officers didn’t know the specific apartment number – which means that the door-kick on the Johnsons’ home – which could easily have resulted in a homicide — was the product of a whimsical guess.

Gerst is a young black man. The police had his description, but they didn’t have his address. David Johnson is a middle-aged white man. This distinction was so obvious that it wouldn’t have been missed even by the typical police officer within a few seconds of the door breach.

If the police had knocked on the door and announced their presence – as they are required to do, by law, unless there is evidence of imminent danger to an innocent person – they wouldn’t have terrorized an innocent family in a near-midnight raid, nor would they have inflicted significant and expensive damage to the property of an economically marginal household.

Furthermore, if the warrantless, no-knock raid was supposedly justified for “tactical” reasons, by hitting the wrong apartment door the cops surrendered the element of surprise.

In the legal response filed on behalf of its local enforcement caste, the City of Caldwell denies that the unlawful attack on the Johnsons’ home inflicted “damages” to their property, or violated their rights in any way. Because this near-midnight raid was carried out according to established “policies and procedures,” the City insists, the assailants are swaddled in the impenetrable cloak of “qualified immunity.”

A police officer who kicks in an innocent person’s door unannounced is a home invader. The victim has the moral and legal right to use lethal force to protect his home against such criminal aggression – something explicitly recognized in an enlightened measure recently enacted by the State of Indiana.

The Caldwell and Nampa police departments, rather than apologizing to the victims of this atrocity, are impudently insisting that there is no need to alter their policies. They want the local population to believe that it is entirely fitting and proper that police can kick in doors at midnight and terrorize entirely innocent people on the basis of hearsay, as long as they can claim the suspected presence of a firearm nearby.

After all, that’s the reason why the Nampa PD recently acquired an MRAP. 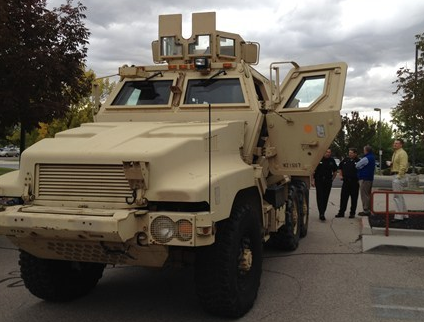